On Wednesday Dec. 1, 2010 at 10:37 a.m. Steve and I took the two seats at the head of the 14th floor conference table, in the Random House building in midtown New York. Steve was in the left chair. I was on the right. 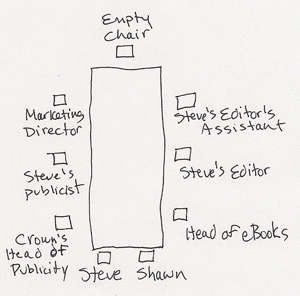 Counterclockwise from me sat the head of Crown’s eBook group, then Steve’s editor, Steve’s editor’s assistant taking notes, an empty chair, Crown’s head of marketing, Steve’s in-house publicist, the head of Crown’s publicity department, and then back to Steve. We were told that the publisher was stuck on a call but would be in as soon as she could. She asked that we start without her.

If the publisher is not in the room for a meeting to discuss what to do to sell your book, you’re in trouble. Big book publishing is just like any other corporate hierarchy—a soul-sucking political minefield—and you need someone who can guide you around unforeseen trip wires. [See Steve’s treatment of hierarchy vs. territory in The War of Art] I’d been on this stretch of land before.

Here’s why it is crucial to have the publisher in the room:

If the head of marketing made a decision to give the green light to a specific promotion that Steve and I suggested without the publisher’s approval, he’d be taking a substantial professional risk. The ceiling wouldn’t fall in on us and his publisher wouldn’t freak out on him later (probably not), but everyone in the room would make an internal subconscious note about who said “yes” to the idea.  Authors rarely stick their necks out and offer to pay for the promotion out of their own pockets (which Steve did in this meeting), so any approved promotional expenditure would come directly out of the publisher’s share of the book’s profits. The marketing director has put himself on point. He’s out front leading the campaign and vulnerable.

Each of the Crown personnel also in that room would have a decision to make, too. They will have to decide whether or not to support the choice the marketing director made—a Catch-22 if there ever was one. If she supports it, she’s aligning herself with a rising power force inside the house. If she doesn’t support the promotion, she’ll be seen as loyal to the crown, Crown’s publisher. Knowing the temperature of the internal politics at a publishing house is crucial. Great fodder for the water cooler.

If the promotion doesn’t work, the marketing director’s name will be permanently attached to the unnecessary red ink expenditure. If the publisher is confronted about the loss by the real heads of the house (the business managers sent down from the corporation’s higher floors to oversee expenditures, profit loss analyses, and report back), the publisher has one of two choices.

1)     She can sell the marketing director down the river and tell the business manager that he went rogue and approved the expenditure without her knowledge or consent, or

The first option isn’t a good idea. It has been the end of many a publisher. The last thing a publisher wants to do is to display a lack of control over her dominion to corporate. The view from above is that if she doesn’t have everyone on a tight leash, the inmates will end up running the asylum and bedlam will ensue. Businessmen who run the corporate operations of the big conglomerates are beholden to the big corporations that own them. They need to squeeze every last percentage point of net profit out of their operations. Having a weak leader at one of the houses is a red flag that $ is being spent without approval by the chain of command. If the publisher doesn’t know about $ being spent, waste is inevitable.

Now if a publisher makes the mistake of blaming someone else for a problem, a spotlight goes right on that house or imprint (corporations own dozens of them all under a single roof). One bad year or, God forbid, quarter, and she’ll be on her way to being the subject of a company-wide release that wishes her the best of luck in her future endeavors.

So the publisher will most likely offer a mea culpa to the business manager for the failed promotion and red ink—we won’t do it again. Then she warns the marketing director that if he makes another hare-brained commitment without her approval again, he’ll be looking for employment elsewhere. That’s the sort of lesson someone only needs to learn once.

But what if the promotion works? That would mean that the marketing director is a hero, no?

No. If it works, i.e. the dollars spent for the promotion are a fraction of the dollars of profit that resulted (which in and of itself is almost impossible to quantify in today’s book world), the marketing director is still in hot water. He went over the head of his boss and got a win without her contribution. BIG, BIG MISTAKE.

Corporate might be impressed with the marketing director, but it’s doubtful that the business manager will even report the success back to corporate. He’s there to report problems not successes. The publisher will be pissed about the chatter in-house about how great a risk and great a triumph the marketing director had approving the promotion and she’ll be damn sure she gets the marketing director back in line. If she doesn’t, she’s got Eve Harrington on her hands.

That’s the last time the marketing director will ever be in a meeting without the publisher sitting right next to him. And he can count on being contradicted by the publisher until she’s satisfied he won’t do anything without her okay. There can only be one Indian Chief at a publishing house. That’s another lesson you only need to learn once.

These kinds of political dramas simmer beneath the surface in every corporate hierarchy. Book publishing—despite the core love of books every single person shares inside the company—is no different. If you have a mortgage and two kids to support and your entire industry has contracted year in and year out, you’d be crazy to put yourself in a no-win position.

So there Steve and I sit and I’m making as much small talk as I can until Steve’s publisher arrives. No point in asking for things or opening up discussions until she’s in the room.

All business meetings are awkward. When you are inside a big publishing house and are asked to attend a meeting, you don’t really know what contributions you’ll be expected to give. And given the fact that making any contribution at all could put you in the doghouse with your boss (see above) you’d really rather not say anything. But you can’t do that either. Why should the company pay you if you don’t contribute anything? So you learn how to get your meeting persona together in a way that doesn’t rock the boat, but isn’t vegetative either.

Over the decades, different publishing meeting agendas have evolved to ease tension. They’re the same ones at every major publisher. We’ve been handed the agenda (a performance script really) for Steve’s marketing meeting. It’s called THE PROFESSION: A THRILLER, Marketing & Publicity Preliminary Plans 12/1/10. Cool.

I’ve been in this meeting a thousand times. I know why they’ve prepared it and exactly what will happen next. We’ll all look at the piece of paper as the appropriate department head reads his/her notes aloud.

I glance at the first page and know we’ve got at least twenty minutes before the appropriate opportunity will come to interrupt. The publisher will definitely be here within that window. I can then blurt out the ideas Steve, Callie, Jeff and I have developed over the previous eight weeks it took to get the meeting . . .

The marketing director dives in, “The first thing we want to tell you Steve is how much we LOVE THE BOOK.”

I drop my eyes to page one and internally debate what the most effective persona I can present to get an idea ping pong game going—one that won’t put anyone at that table in an indelicate political position after Steve and I leave.