In 1959, Cambridge University selected Charles Percy Snow for its annual Rede Lecture, a centuries-old series of oratories that dated back to 1550. Previous presentations covered such scintillating topics as Terrestrial magnetism and the ionosphere and Libraries in the Medieval and Renaissance Periods. 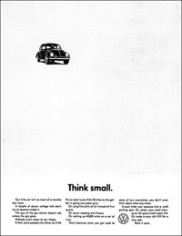 The iconic VW ad that brought the "Two Cultures" together

Snow seemed to be the perfect candidate. He was the UK’s civil service commissioner, bestowed with all sorts of highfalutin titles—Baron, Peer, and in due course Knight. And quite reasonably, the Fellows of Cambridge assumed that Snow would deliver the lecture’s traditional awkward British elocution…the sort that John Cleese would later parody for Monty Python’s Flying Circus. After 45 minutes of Snow stumbling around an esoteric subject, the gowned audience would clap politely and then they’d all be off for tea. They’d been doing it that way for 449 years.

Snow, however, was an anomaly. While he kept the British citizenry calm and carrying on as head of the civil service, he also held an advanced degree in physics. But he wrote and published quite a bit of fiction, too. As his wife was a well connected novelist, Snow would often appear himself at cocktail parties filled with literary intellectuals. Overhearing the Bloomsbury set snickering about how poorly read the scientists of the day were, for fun, Snow would provoke the tweedy imbibers by challenging them to describe the second law of thermodynamics, the core science equivalent of Hamlet or The Red and the Black. Few were amused. Fewer still accepted the challenge.

Requests for the pleasure of the Snows’ company for after hour gin and tonics soon dried up. But their drawing room alienation was not a complete bust. It inspired a great idea for C.P.’s Rede lecture.

On May 7, 1959 at the Senate House at Cambridge, Snow spoke of the chasm between Britain’s two cultures—the “science” culture and the “humanities” culture—and of how the twain never met.  The scientists talked to the scientists and the intellectuals stayed amongst intellectuals. The “Two Cultures” were the Ivory Tower equivalent of Chelsea vs. Arsenal. For Snow, 1959 was a turning point for the atomic age. If science and the humanities didn’t come together—empiricists exploring the humanities and aesthetes understanding the scientific method—human “progress” would cease.

The lecture was such a smash that it was soon published in book form as The Two Cultures and the Scientific Revolution. Snow was the toast of the Kingdom.

Little did he know that the two cultures Snow spoke of were already coming together in the United States. But it wasn’t happening at General Electric or Yaddo. It was happening in Advertising.

Before 1959, advertising was science driven. All ads strived to find a compelling “unique selling proposition,” a defining characteristic of a product that separated it from its competition. Each ad was literally laid out to exacting scientific specifications. The copy (science) was written first and then the drawing or photograph (humanities) was commissioned, i.e. someone from the graphics department was brought in to draw a picture of the product to fill out the sell copy.

Scientific advertising was based on rational thought. If Trident gum was “better” than Juicy Fruit and the adman could prove it using Doctors or Experts to back it up (“4 out of 5 Dentists recommend”), consumers would be influenced by these left brain (the seat of reason) arguments and buy Trident.

The unique selling proposition was coined by mad man Rosser Reeves, advertising scientist extraordinaire. His rational USP campaigns such as M&M’s melts in your mouth, not in your hands and his scientific approach to selling (I like Ike–and who didn’t after the Normandy landing?) dominated ads for decades. Sales messages were clear and held no deeper meaning. Buy our candy and you’ll get a unique benefit that you won’t get from our competition. No fuss, no muss. Here’s what our product does better than theirs…the end.

Just as C.P. Snow was delivering his Rede lecture in 1959, an advertising outsider—Bill Bernbach of the small, unglamorous firm Doyle Dane Bernbach—jumpstarted advertising’s creative revolution. Ad agencies of the day were WASP bastions of the Ivy League (Yale mostly). Bernbach was Jewish, born and educated in public schools in the Bronx, a graduate of NYU and an iconoclast. He didn’t fit in with the men in the gray flannel suits so had to start up his own shop with two other outsiders to affect change in the industry.

Bernbach believed that advertising could be an art, a medium that could contribute to the collective unconscious rather than just exploit it. Science was nice and the USP was fine for what it was, but it didn’t account for why consumers bought high-end or generic products.  Why buy a Philippe Patek when a Timex delivers the same information at a fraction of the cost? Why buy cheap toilet paper when you could have Charmin for a few dimes more?

Bernbach suspected that what drove people to crave luxury or stoically endure “good enough” goods rested in their unconscious—which resides in the right hemisphere of their brains, the realm of the imagination. What if he brought science (rigid rule-based copywriting) and the humanities (the graphics department) together? Could one influence the other and vice versa in a transcendental way? Could copy and graphics complement each other and deliver a completely different kind of selling experience…one that made rational sense to consumers but also appealed to their unconscious desires?

Less than twenty years after World War II, few of the big American advertising agencies pitched their shop to the German car manufacturer.  But for Bernbach, it was the perfect product—a Nazi engineered ubercar —to test his theories. If he could sell Volkswagens using his combination copy writer/graphic artist approach, he’d revolutionize advertising. He locked his best copywriters (Julian Koenig and Bob Levinson) in a room with his art director (Helmut Krone) and told them to spitball ideas. The only rule was that there were no rules.  Then he tortured them until he thought the pitch was right.

DDB’s brilliant counterintuitive copy “less is more” and graphics positioned the Volkswagen as the anti-establishment driving machine. It was the perfect message for the growing mass of Americans tired of keeping up with the Joneses.  Science (the car was cheap, got you where you needed to go, and didn’t change every year) met the Humanities (the graphic design anthropomorphized a car into a cute “beetle” and used “negative space” to maximum effect). A machine with the darkest origins imaginable became an icon of American individuality.

Those two cultures coming together (Copy and Art) changed the ad game forever. Remember that Apple Orwellian 1984 ad that ran during the Super Bowl? Science (a computer company) met the Humanities (a reference to a seminal work of western literature). It only ran one time on television and it is still one of the most talked about and effective “positioning statements” for Apple to this day. Apple is for nonconformists, PCs are for squares. Apple is still pounding that message home even as they use strong-arm tactics to dominate their markets.

In the decades that followed his famous lecture, Snow’s two cultures came together in industry after industry. None more compellingly than the digital marketplace. Are Steve Jobs, Bill Gates, Mark Zuckerberg, Sergei Brin, and Larry Page empiricists or aesthetes? They’re both. The science behind their innovations is remarkable, but not beyond the skill set of hundreds if not thousands of brilliant hackers in the U.S. What separates them from their chosen pack is their ability to engage and listen to the right half as well as the left half of their brains.

Much is being theorized today about the Age of Singularity (The Singularity is Near)…a time when our machines coalesce with our biology. It sounds pretty cool and also pretty weird. But I don’t think singularity is about our machines—physical and digital manifestations of human imagination. It’s about the remarkable internal synthesis of Snow’s two cultures—empiricism and aesthetics.

Empiricism’s home is the left hemisphere of each of our brains and Aestheticism resides in our right hemisphere. When we put them in a room together and allow them to influence each other, art is the result. More and more creative people across all disciplines are realizing that you need both parts of your brain to create something unique.

So what does any of this have to do with Steven Pressfield’s contemporary military thriller THE PROFESSION?

As you might expect, book publishing is still a two culture business.

THE PROFESSION is that rare novel that bridges these still prevalent and polarizing cultures—the rule-based genre conventions of “Commercial” publishing and the unconventional and lyrical novels of “Literary” publishing.