The Economics Behind a “Hail Mary,” Part One

I’ve racked my brain to figure out how to dive into the murky P/L waters without boring the bejesus out of everyone. I was talking about it yesterday on the phone with Steve and Callie, when I realized that each line item on a P/L [Profit/Loss Statement] actually tells a little story.  So over the next couple of weeks, I’ll tell as many stories as I can while explaining the math…

The very first line item on a P/L is:

The acquisition P/L from last week connoted a very high level of commitment by a publisher for a big work of nonfiction (a book like Ron Chernow’s brilliant biography, ALEXANDER HAMILTON). I’ll use a similar hypothetical (see below) to describe the best case scenario for a debut novelist…that of being anointed as the “next big thing.”

The P/L below reflects one of those acid reflux inducing million dollar deals that can suck the life out of a professional writer. The last thing a pro—in the throes of banging out the twenty-seventh draft of her proposal about the migratory behavior of the blue-tailed thrush as metaphor for NASDAQ market fluctuations of the 1990s—needs to read about is an amateur writer striking it rich.

Being labeled the “next big thing” is a double-edged sword, too, but that’s a whole other post.

If the press release is to be believed, the hypothetical novel was written by a twenty seven year old first timer who bears a striking resemblance to Natalie Portman. She wrote the novel on a lark during coffee breaks while doing her day job as a clerk to the Chief Justice of the Supreme Court.

This is the kind of deal that pros should not pay attention to. It’s an example of external resistance (outside of one’s control) of the most obvious sort. Publishers very rarely part with seven figures for unproven talent. When they do, they try and make as much of the “story behind the story” to set up the sell-in for the book (see The Sell-In post) as possible. So the details of these deals, while technically accurate, are expertly spun by wily publicists and marketers to greatest effect.

It’s more likely that the first time novelist starts writing the book in high school. Then after she gets out of college and lands a job as “assistant” to a clerk to the Chief Justice of the Supreme Court, she becomes obsessed with finally putting the thing to rest. She gets fired because of the distraction, but uses her severance package to support herself while she finishes the damn thing. Then, after twenty-eight agents pass or don’t even respond to her queries, an intrepid agent takes a chance. He works with the novelist for fifteen months revising the book. After the writer and the agent are satisfied that they did all they could to make the novel as commercially viable as possible without robbing it of its heart and soul, the agent submits the book to editors.

All along the agent tells her that the novel is (what I’ve come to call) a “Hail Mary” submission. A unique blend of commercial hook matched with idiosyncratic voice, a “Hail Mary” is either a list-leader for a house or it’s a pass. Either the writer will get a substantial offer and commitment from one of the Big Six, or every editor will wish the agent “the best of fortune finding the book a more enthusiastic home.”

In this rare instance, a touchdown results. The agent sells the book at auction (see my previous post The Art of an Auction). The winner of the auction agrees to a guaranteed advance of $1,000,000 for this first novel. What that means is that the publisher will pay the author $1,000,000 (not in one lump sum, rather over a period of 2-3 years) even if the book sells only twenty copies. It’s guaranteed.

However, it’s also an advance against future earnings so it doesn’t mean that if the book becomes a monster bestseller that the author receives no additional payment. (I’ll get into that later when I go through Royalty Rates)

An oft-repeated phrase among publishers is that the only thing worse than coming in second in an auction is winning it. So how does the “winning” house expect to recover all of that money for an unproven talent?

The publisher will have numerous shots to recoup its money because it will be able to package the book in multiple formats, which brings me to line two of the P/L:

Seventy five years ago, there was only one book format—Hardcover.

Reading and collecting books was for gentlemen. Bindings were hand sewn, the case materials made of beautiful leather, and the type meticulously embossed on each spine. There is a fascinating demonstration of the bookmaking craft of that era in the film adaptation of Jon Robin Baitz’s play, THE SUBSTANCE OF FIRE. It’s a good movie too.

Books were expensive treasures.  The unit cost (how much it costs to make one book) was high, but the market (wealthy people with disposable income) was willing to pay what publishers charged. A personal library was a class distinction. But when the global depression of the 1930s hit, book publishers took it on the chin. Something had to be done to expand the market.

Like most innovations, the answer didn’t come from an industry study group or an expensive report commissioned from a business consultancy. Rather the saving grace for the business sprang from one mercurial man’s need to distract himself after a day of tiresome schmoozing on behalf of his father’s company.

Allen Lane was the son of John Lane, the founder of the Bodley Head publishing concern. One day in 1934, he’d been dispatched to Devon, England to visit with the firm’s bestselling writer, Agatha Christie. After a full day stroking her ego, Lane waited for his train home. But first, he’d stopped into the station’s newsstand looking for something to read. He was appalled by the selection, mostly silly magazines and a few expensive hardcover reprints of Victorian novels.

On the platform, Lane looked around and noticed many men just like him, commuters on business with nothing but their own thoughts to keep them company on the trip home. If there were a vending machine filled with low cost books that were made of paper, like magazines, Lane thought to himself, all of these sad sacks could have something disposable to read on the train—a book could be made cheaply and sold like a magazine.

A year later, Lane had had enough of apprenticing at his father’s firm. He was especially appalled by Bodley Head’s decision not to publish James Joyce’s Ulysses, so he stormed out to set up his own publishing house. He had no interest in being precious. So, he called his company Penguin books and decided to put an image of a penguin on every one of them. His first order of business was developing and installing a paperback vending machine at Charing Cross Road.

He called it a “penguincubator.”

Penguin books became ubiquitous at train stations all over England and eventually the world. The paperback idea caught on quickly, especially in the U.S. when a twenty three year old named Ian Ballantine opened up Penguin’s stateside office.

The new, second format was just the kind of innovation that would not only increase revenues, but expand the book reading market. Penguins led to other mass market paperback lines-—Pocket, Bantam, Ballantine (Ian was much like Allen Lane), Dell, Fawcett, Berkeley etc.-—and then, in 1952, legendary editor Jason Epstein launched high-quality trade paperbacks called Anchor Books for Doubleday. Epstein went on to run Vintage trade paperbacks for Alfred Knopf too.

With the right book, publishers could now sell a hardcover, followed by a mass market paperback, and then to revitalize the title, it could re-issue the book in trade paperback years later.

Three formats. Three bites of the apple. Three ways to earn out an advance.

While Audio Book and Large Print formats evolved in the ensuing fifty years, their resultant global effect on the business was relatively minor. Nice little streams of income, but not enough to have any substantial bottom line impact.

The game-changing format of the Twenty First Century, of course, is the eBook.

Just four years ago, there was little excitement about reading a book on a screen. Then in November 2007 Amazon Kindle launched. It sold out in five and a half hours. The eBook took hold as Amazon priced eBooks even below what they paid for them from publishers.

When the iPad arrived in April 2010 (just 18 months ago), eBook purchases went through the roof. Today, eBooks sell at a higher rate than physical books.

There is no running away from the fact that eBooks are an even greater disruption than the last major publishing innovation, Allen Lane’s “penguincubator.” EBooks have transformed publishing’s business model.

Next week, I’ll get into how when I write about Terms of Sale… 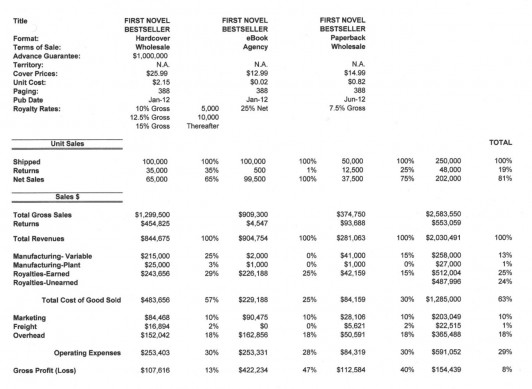