This blog is taking a few days off at the end of the year. Here’s a favorite post from 2011.

The most beautiful woman in the world called me yesterday to tell me a story.

Every day she walks her three children through Central Park, drops off her eldest at school, and then walks her two youngest back across the park to begin that day’s set of activities.  After school lets out in the afternoon, she repeats the journey.

Yesterday was the first sunny day in New York for months, warm enough to shed your jacket.  So hundreds of New Yorkers made a beeline to Central Park to get a whiff of impending spring. 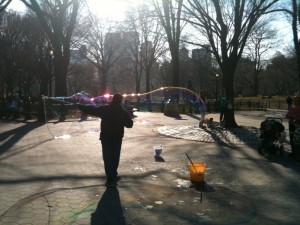 A crowd in New York is a magnet for commerce.  With the first thaw of the year, acrobats, magicians, mimes, face painters, bad caricaturists, balloon dog makers, hot dog venders, etc. seem to emerge from the ground and take their places in the park’s prime walking thoroughfares.  What’s really cool is that you’ll notice that you’ll be able to find the same juggler in the same place year after year.  Commercial territories are respected.  It’s the code of the park.  If the guy who paints his face silver and acts like a statue claimed a spot in the park ten years ago and he shows up every year to the same spot, it’s his.  No arguments.  Move along upstart ventriloquist.

So after the most beautiful woman in the world picks up her big boy after school, she decides to spend the rest of the afternoon in the park.  As is her custom, she likes to walk through the Central Park Mall on her way to her kids’ favorite playground.  The Central Park Mall doesn’t have a Gap or a Slurpee concessionaire; rather it’s a stunning creation that Frederick Law Olmsted and Calvert Vaux described as an “open air hall of reception.”  Wide enough to accommodate several horse drawn carriages with parallel rows of ornate benches defining it’s perimeter and shaded by a canopy of branches from American elm trees, the Mall runs about a half mile between 66th and 72nd street.

If you’ve ever seen the movie Kramer vs. Kramer, the scene that rips your heart out—Dustin Hoffman dropping off his son for a court-ordered play date with Meryl Streep, the son’s AWOL mother—was filmed at the Central Park Mall.  How great a choice was that?  Four divine creations—father, mother, child, and the natural world—tragically incapable of union.  Robert Benton (the movie’s Screenwriter and Director) brilliantly communicated that deep emotional truth in a ten second shot.

A veteran screenwriter, Benton knew the formula for a love story, and Kramer vs. Kramer is one Hell of a love story.  Love stories require a scene when after conflict, the lovers are reunited.  Benton could have had Hoffman just drop the kid off with Streep’s doorman and then have Streep come down and kiss the kid.  Or he could have had a babysitter take the kid over to her apartment.  Those scenes meet the formulaic requirements. But they aren’t nearly as poignant or deep as that shot in the park.   Art requires adherence to formulaic conventions, but the formula itself is not art.

So the most beautiful woman in the world and her three kids start walking through the Mall at 72nd street.  There’s a Bubble man, making incredibly large bubbles that prove irresistible to any being still capable of unselfconsciously skipping (children).  The big boy asks the bubble man…

“How do you make such big bubbles?”

The most beautiful woman in the world and her kids smile at the man and continue walking.  They make it to 66th street and whaddya know? There’s another bubble man.  His bubbles aren’t any bigger than his competitor’s on 72nd street.  Big bubbles are big bubbles, right?  Overwhelmed by the moment, the big boy has forgotten all about the other bubble man and his unwillingness to tell him his formula…

“How do you make such big bubbles?” he asks the 66th Street bubble man.

“The trick is to get a big bucket, mix about half a bottle of Palmolive dish soap with about a gallon of warm water…then you take some big pipe cleaners…here let me show you…”

The most beautiful woman in the world digs into her purse and puts $3.00 into the man’s tip jar. She walks over to one of Olmsted and Vaux’s benches, sits down and watches her three children run, jump, and laugh as they chase this bubble man’s bubbles.  She gets out her iPhone takes two pictures and sends them to her grumpy husband who has to work late that night.

Then she asks the bubble man how much it will cost for him to make three sets of pipe cleaner big bubble makers for her kids.  She’ll make the soap at home and then her kids can create their own monsters.  The bubble man tells her to pay him what she’d like.  He’ll be happy to do it.  Meet him tomorrow at this same spot and he’ll give them to her. Then the most beautiful woman in the world calls me.