My friend Kate tells this story: 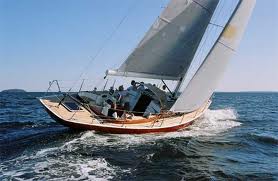 I was visiting my friend Bob Gilbert, who among many other talents was a fabulous boat builder. This was at Harvey Swindall’s boatyard in Ventura [California], where Bob was building a 92-foot yacht based on the plans for the famous ocean racer Bloodhound, which had been built originally in the 1870s at the Fife Boat Works in Fairlie, Scotland. The new Bloodhound’s keel had been laid. The ribs were in place. Bob showed me around, pointing out all the little details of construction, which he, being a master builder, had gone to incredible lengths to get right. I was amazed—and greatly honored to be allowed in on such a monumental venture.

We finished; it was late and getting dark. As we were walking out, Bob pulled up to say good night. I said, “Aren’t you going home, Bob?”

Bob said he was staying with the boat. He pointed to an Airstream trailer that he had parked in the yard. He’d been sleeping beside the new Bloodhound for the past week and was going to keep on till she was finished and in the water. I asked, “Why?” Bob got this very sober look on his face. “Beware the saboteur,” he said.

Malicious arson, Bob went on to tell Kate, is a not uncommon phenomenon in boatyards. People get jealous. They see a colleague building something great; they’ll sneak in at night and put that baby to the torch.

A boat, particularly a wooden boat, is a powerful metaphor. The laying of the keel is attended by great ceremony; the launch brings friends from thousands of miles. Good luck charms abound. No one knows if the boat will float true or sink straight to the bottom.

What is a boat anyway? It’s a vessel upon which we venture into the unknown. It’s magic. A boat takes the clawless, finless, wingless human being and turns him into a mariner, an adventurer, a swashbuckler. It opens the wide world. This is serious juju. No wonder the skulking onlooker feels his fingers itch for the kerosene and the Zippo.

We too, on the artist’s journey, must beware the saboteur. The people closest to us, friends and family, may not like it when they see us starting to change. When we begin to paint, to write, to dance; when we find the courage to live out our dreams, our progress becomes a reproach to others if they are not doing the same. It’s unconscious. The people trying to sabotage us may love us and wish us well. But they will attempt to trip us up, to undermine our resolution and to sap our growing self-confidence.

On the artist’s journey we are redefining and reconfiguring ourselves and our lives. This is a radical act. As we begin behaving with greater authenticity, power begins to concentrate around us. People can feel it; some are threatened by it.

Resistance, as I define it, is self-sabotage. It’s the thousand-and-one ways you and I find to get in our own way and stop ourselves from living out our unlived lives. But there is such a thing as real sabotage. Sabotage by others.

As dark as it sounds to say it, I believe that Resistance is so diabolical that it can be communicated like a disease from our own hearts, fearful of our ascending evolution, to the breasts of those closest to us, who then articulate and act out toward us and against us that which we are most afraid of in our own selves.

Each day you and I construct that vessel, which is unique to us and which we hope will carry us across oceans to the unfolding evolution of our lives. We must be wary of that element in our own hearts, and the hearts of others, that would destroy us before we even get in the water.