A month ago, just before the Christmas break, I ran into a friend and former colleague. Obviously late for an appointment, she had that thousand yard stare of the warrior just back from the front. 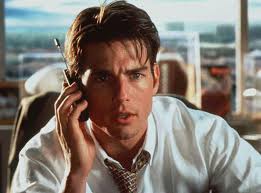 Tom Cruise as Jerry Maquire. "It's an up-at-dawn, pride-swallowing siege that I will never fully tell you about ... "

We gave each other a hug and asked about each other’s spouses and kids. Neither one of us threw out publishing’s “we have to get together for lunch or a drink” fake intimacy shtick.

We had a great time working together but we both knew that we’d probably never do so again. I don’t represent her kind of books and she has no interest in the kind I do represent. As strange as this may seem, there’s not a better basis for a book publishing friendship as that. Because you aren’t in the same editorial arena, there’s no chance of Schadenfreude and there’s no need to steel yourself for one of publishing’s undermining conversational digs….

“Oh, you bought that? I think I rejected that three months ago…I guess I just didn’t see what you did in there.”

When you’re with someone who publishes women’s stuff while you publish guy stuff, you can actually be yourself with each other and let your guard down.

In the elevator up to my office, I remembered something she used to mumble to me in the thrice a year succession of pre-launch/launch/pre-sales/sales meetings that convene for each of the three selling seasons at the big publishing houses.  It is in these meetings that editors do whatever’s necessary to position their authors’ books for the company’s publicity, marketing and sales departments. The meeting presentation is a crucial performance skill for an editor to master. If an editor can’t get the hostile audience (BS meters are on high) to buy in to what he’s selling…the book is sunk. The only thing that can save it is luck. [Keep in mind that I am describing the traditional book publishing model here. It’s much different when you bypass the gatekeepers].

My friend is one of the best and most charismatic presenters I’ve ever seen. Her stable of bestselling authors is testament to that.  But like all pros, when it was her turn in the spotlight…she felt the angst and nerves just as much as a first timer. So to let some steam off, just before she’d rise to walk to the dais, she’d turn to me and quote from a favorite movie of ours…

“It’s an up-at-dawn, pride swallowing siege that I will never fully tell you about…”

We used to trade quotes from Jerry Maquire. Cameron Crowe’s screenplay and Tom Cruise’s characterization of what a sports agent contends with is a spot on description of what an editor endures too. Editors are authors’ voices inside the houses and the things they have to do to make sure their books get an opportunity to perform are not necessarily what the creators of a book need to know. There’s a lot of horse trading. And there are many additional gates inside a house that an editor must unlock before a book has a real shot at reaching its largest possible market.

While being a big shot editorial insider at a big six publishing house may seem pretty cool to outsider agents and writers trying to get attention, the reality of the job is something else entirely.

So what is it exactly that book editors really have to do to be successful?

1) Build a name for themselves such that agents think of them first when they have a big book to sell. This requires a lot of looking fascinated during business lunches.

2) Read hundreds of submissions every year and select the books that will make or break their reputations. When I was at Doubleday, I tallied my submissions and averaged 5-7 manuscripts and proposals every week—approximately 300 per year…all from agents—and I published 6-9 books per year (2-3% rate of acquisition).

When they reject a manuscript or proposal, they must do so in such a way that the agent isn’t overly pissed off by their reason/s for doing so, or they may be cut out of the next big submission from that agent.

3) Rally in-house support to offer a compelling enough advance to acquire the book for publication.

4) Negotiate the deal and the contract with the agent.

5) Edit the book after acquisition

6) Write sales tip sheet copy, catalog copy, presentation copy and flap copy that best positions the book…in as few words as possible. And no, they can’t write one description and use it for every purpose…different audiences.

8) Come up with several cover concepts for the jacket of the book so that the art department has something to chew on while it prepares cover comps. Ridicule of editors’ ideas reigns at these meetings, but if they don’t have any it’s even worse.

9) Successfully communicate with the author and the agent throughout the process in such a way that they are confident that the house is on the case, doing everything possible to make the book a success even though everyone knows that there are only a few select books in each season’s list that really get the full court press…and this one ain’t one of them.

11)  Attend sales conferences and schmooze with the sales reps so that they put a special push on their titles. This often requires drinking far too much and losing money at the all night poker tables set up at Marriot hospitality suites in Florida or Arizona.

[FYI most sales conferences today are not like this. Most of them are done electronically which completely eliminates any real possibility of forming an authentic relationship with a sales colleague. Not only that…publishers, heads of publicity, and heads of marketing are the only people who attend outside the office conferences today. Today editors sit on their hands and wait to hear how well their books went over, hoping their boss didn’t botch their pitch.

12) Take the blame if the book gets trashed in the media or if it fails to sell.

13) Give others credit if the book actually works.

This is a delicate balance. An editor needs to be the face of the book in-house without alienating anyone. No one likes a show off or braggart when a book hits big. Well, some are impressed by it (usually the higher ups), but you still have to look at yourself in the mirror every day.

But getting a reputation as a mopey mope when a book doesn’t work will make you persona non grata. The best strategy is to remain calm—if the book goes through the roof, don’t act surprised or jubilant. The editor staked her reputation on it being a success. When it is, it’s to be expected. Be a pro.

If it bombs, the editor must have the “they all can’t be home runs” attitude, take her lumps and move on.

14)  Hope that their annual net dollar contribution to the company is at least 5 times their annual salary including benefits. If an editor’s total annual cost to the corporation is $100,000, their books should contribute $500,000 of net income each year. It’s okay to have a bad year every now and then…at least it used to be.

[A lot of editors don’t pay attention to this crucial detail and don’t even know how to read a P/L report. Then they are dumbfounded when they are let go.]

I’m sure I’ve forgotten other prime duties, but I think you can see why even a star editor like my friend can find the job a “pride swallowing siege.”