The Difference Between Pain and Injury

By Shawn Coyne | 18 Comments | What It Takes

So I’m at the health club the other day. And like most health clubs, there is a ceaseless barrage of aural and visual input. 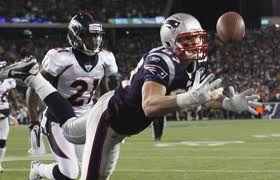 Rob Gronkowski of the New England Patriots. Is it "pain" or injury?

Grunts reminiscent of a maternity ward come from a beer bellied guy who wants everyone to know that he’s just bench pressed 112.5 pounds. A personal trainer checking his cell phone, halfheartedly beseeches for “just one more” Russian tea kettle swing from an elderly lady wearing a leotard circa 1973. The screams and strained cheerfulness all awash in the pulse pounding club music pouring out of the gym’s suspended speaker pods.

But what really catch my attention—despite the fact that I have my own pre-programmed playlist streaming into my cerebral cortex from my own personal listening device—are two 42 inch plasma televisions above my head. One is ten feet to the right of me and the other about three feet to the left. The one directly in front of me is running a new daytime show called The Daily Chew, which from what I can tell is an hour long of carefully orchestrated food pornography. Lots of sizzling meats and sugar coated confections, followed by ecstatic expressions from the show’s five hosts as they sample the in studio prepared fare.

I’m not a foodie, so it is ESPN2 to the left and CNN to the right that distracts me from the horrors of maintaining an elevated aerobic heart rate for forty five minutes. ESPN2 is running a story about the condition of the New England Patriots star tight end, Rob Gronkowski. “Gronk” is the perfectly sculpted protoplasmic beast who broke a number of NFL receiving records this season. But in the AFC Championship game against the Baltimore Ravens, he “sprained” his ankle and had to be helped off the field.

While I pant, the network keeps running the slow motion injury footage. It’s gruesome.  Not on the level of Lawrence Taylor’s tackle of Joe Theismann on Monday Night football in January 2008, but at least on a par with Pittsburgh Steeler quarterback Ben Roethlisberger’s experience in Cleveland this season, which effectively knocked the black and gold out of the Super Bowl hunt. Calling the collapse of Gronk’s lower tibia and at least a rubber band stretch of his posterior tibial tendon an “ankle sprain” is like saying Donald Trump has a slightly receding hairline. After three replays and three winces—one view never seems to be enough, two is too voyeuristic and three somewhat shameful—I shift my eyes to the CNN portal.

It’s as if CNN and ESPN2 are running on collaborative algorithms  On CNN is a “Special Report” from their medical expert, the overly earnest but equally sympathetic Sanjay Gupta. Gupta’s like the nice guy in college who shares his lecture notes the night before a big test. It’s not his real hour-long special show; it’s the promotional two minutes Gupta will do every hour for the next six hours to lead in to the actual program later that evening. Seeding a viewership I think it’s called.

The promo draws me in because I recognize the visual above the “Tonight on CNN” pitch copy crawling at the bottom of the screen. It’s a photo of an excessive 20,000 seat high school football stadium in Western Pennsylvania. Then below the grandstand is the headline High School Football Coach Accused of Forcing His Injured Players to Play. If there were anyone in the health club not wearing headphones, they would have heard my involuntary, rather loud laugh/snort.

Taking football coaches to task for their injured players risking debilitating chronic physical damage is (as John Millius wrote in his Apocalypse Now screenplay) “like giving out speeding tickets at the Indianapolis 500.” What made me snort was that I know that Gronkowski earned his stripes as a player at Woodland Hills High, not twenty miles from the shocking goings on at the high school on CNN. And on ESPN2 there is incessant speculation about whether he’ll play in Sunday’s Super Bowl…hyping up how important he is to his team and what a shame it would be if we don’t see him play.

Really, Sanjay and CNN? This is shocking news?

And ESPN2…aren’t you just using that “will he play” angle to show that disturbing video clip over and over to hold viewers until the next commercial break?

It is then that I remember one of my former coaches. He used to have several “off the cuff” character speeches he’d give us boys when an opportunity presented itself  One such soliloquy would result if a player took a bit too long to get up after a play from scrimmage.

“Son, do you know what the difference is between pain and injury?”

“Pain is when the player is hurt. Injury is when the team is hurt. Now tough it out and get back in the huddle.”

We all took this to mean that as long as you could do your job on the field, you were expected to play. Pain is just part of the game. Only if a player was literally unable to run, tackle, block, thrown, catch because of a torn ligament, broken bone, etc. would a coach refer to him as “injured.” Otherwise they had “a loose wheel” or were “banged up.”

The fact is that coaches don’t force the injured to play. They don’t have to. Out of fear of losing their jobs or letting down their friends, football players are the last people to define themselves as “injured.” Even if they are put into a cast after breaking a bone or not allowed by medical professionals to play, they won’t say they are injured. Rather they’ll revert to defining themselves in terms of a percentage. “I’m not 100%, but who is?”

So, what philosophical lightness can we take from this very dark football phenomenon?

In real life, we don’t often have to face a metaphorical blindside blitz that could not only hurt us, but take us out of the game permanently. But we do face a helluva lot of other pain…self-imposed mental anguish, emotional damage from relationships that have let us down, sporadic anxiety, occasional depression, etc.

These are the hurts that “bang us up.” They are our artistic battle scars and we have to play through them in our daily engagement with Resistance. The day when we don’t have some kind of internal twang of pain may never come. We had a fight with our spouse that morning. We can’t believe we weren’t picked for a prize project. Our co-worker is an emotional vampire who disturbs our work environment. This is the hurt that we bring to our desks at the beginning of an average work day.

What I think Steve suggests is that this kind of stuff is to be expected. Life is tough. It hurts. But we have to remember that Resistance loves it when we hurt. It gives us a ton of excuses not to do what we know we should be doing.

Playing hurt means not buying into Resistance-generated excuses. If you push through the pain, you’ll find that it will sting less when you call it a wrap that day.

But playing injured is another thing entirely.

If you need professional help to contend with an internal injury—clinical depression, substance abuse, bipolar diagnosis, etc., something if left unattended could threaten your very existence—get it. Not only is there absolutely no shame in seeking help, but if grind it out and try and work your art when you are injured, you will damage it. You could even declare great work that you’ve already done “crap, worthless, garbage” and throw it out. When we are injured, we are not ourselves.

Injury will keep you from doing authentic work.

Take the time to recover, to reestablish your equilibrium. Remember though, injuries leave scars and pain lingers. But once you sense that the injury has run its course (you’ll know this intuitively) get back to work. Believe it or not, the injury will pay you back with deeper insights once you’ve recovered. Walker Percy once said, “The wounded man has a better view of the battle than those still fighting,” and I think that’s true. If you don’t get “banged up,” suffer a broken bone or two, or put yourself so at risk that you face a major injury, you’re sitting on the sidelines of your own life.

Yes, you gotta play hurt, but don’t lie to yourself about an injury.

As much as I enjoy watching Rob Gronkowski play football, I hope he doesn’t on Sunday.