When the Ladder Becomes a Wheel

I’ve been reading a fascinating book called American Icon by Bryce Hoffman. It’s about how Ford Motor Company came back from the brink of bankruptcy. Its CEO, Alan Mulally, took the job when Ford and the other two members of the Big Three car manufacturers were in deep trouble. Way before the 2008 crash.  While GM and Chrysler ended up begging and getting billions of bailout dollars from American taxpayers, Ford prepared for the worst, restructured and didn’t have to ask for a penny.

How Mulally got Ford out of its tailspin reminded me of pages 147 through 159 in The War of Art. In just these twelve pages, Steve Pressfield puts his finger on exactly how our world view directs our actions.

Mulally’s turnaround of Ford is a brilliant case study to support Pressfield’s ideas. He switched Ford’s orientation from hierarchy to territory. The book reveals:

We no longer live in isolated analog hierarchies.

Ford can’t rely on consistent F-150 sales just because it has enough market share, solid distribution, some economies of scale, and capacity. Rather they needed to strip down the bureaucratic hierarchies and all work toward a common goal…producing the right number of cars to meet demand with impeccable quality. No one buys a Ford just because it’s a Ford anymore.

Our world is just too connected to rely on BS.

Too many other car options…too easy to find influential tribal voices that debunk cynical marketing. Too many people online writing their truth…“don’t believe the hype, the Honda Ridgeline kicks the F-150’s butt.” (Just FYI, I don’t know anything about trucks, so please don’t take the above statement seriously. Find someone who does know trucks to give you the real scoop.)

We live in a global digital territory now.

The pursuit of “We’re Number One!” by concentrating on beating your competition is now absurd. Especially when your competition is as screwed up as you are. Create something great within your chosen territory that people don’t even know they want. Like a Ford Flex or a Pebble watch. Or a book about gardening in raised beds. Make it better. Then do it again.

Analog hierarchies use the pursuit of the fruits of labor—money, status, Big Kahuna-ship—to “incentivize” individuals. Do this and we’ll pay you more and get you into the Country Club… Daniel Pink writes a lot about this and he’s found that it is not the best way to motivate a human being.

What digital territories demand is much more difficult. They demand honesty, integrity, and connecting with other people to explore common interests. The fruits of our labor in a territory aren’t about being named one of People magazine’s 100 most beautiful people. The reward is simply to continue doing your work. If your work is professional and meaningful, there’s a tribe of like-minded people on the planet who will find and support you. If it isn’t, work on something else.

Alan Mulally’s big triumph was not making billions of dollars for Ford.  It was getting the people who spend eight hours a day at Ford to love their work.

So what does this have to do with Book Publishing?

These two books, American Icon and The War of Art, got me to think about where the book business stands today and where it’ll be tomorrow. Don’t cringe.  It’s good news. Very good news.

For fun, I made a couple of visuals to explain. 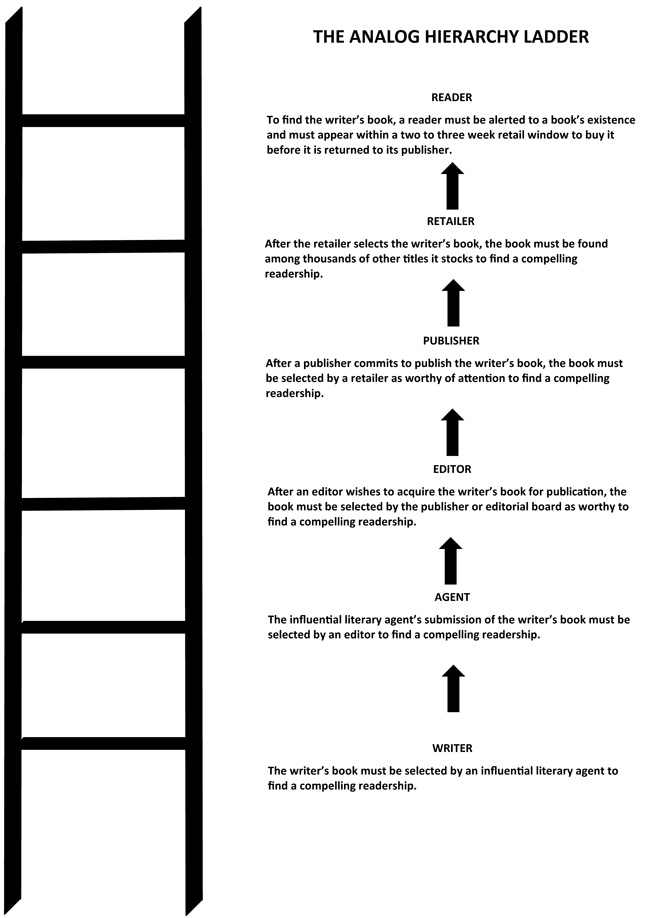 This is the old Big Six scarcity model . . . writers getting picked by established experts who in turn present readers with officially sanctioned publications. The message is that these books are the “true gen.” The rest are vanity. 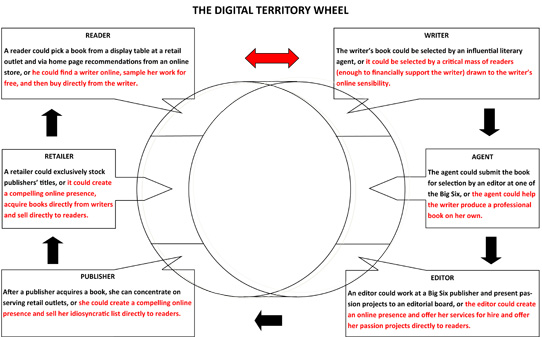 With the dawn of the Internet, the ladder began to lose its rigidity. And today, simply by connecting its bottom to its top, it has morphed into a wheel. The writer and the reader can now talk to each other without permission from the other four traditional players. Revolutionary.

Big traditional publishing will continue.  In order to remain profitable, though it will have to change in much the same way that Ford had to change. But we all crave third party validation. Being published by Knopf or Little Brown or St. Martin’s Press means that your work is professional and valid.

If you are offered a contract by one of the Bigs, it’s an honor. Pat yourself on the back and then start your next book. Plus, these big companies can finance projects that are extremely daunting.  They will remain the Medicis for great artists like Robert Caro and Steven Pressfield (whose next project requires a dizzying amount of work and expense). We need them to get those blockbuster works funded.

The new Territorial publishing will thrive. Brave professional souls willing to forgo the advance check and spec it, now have the ability to build their own long tail businesses. I think that these “little engines that can” will not only increase the number of book readers and writers, but will be the industry leaders that truly globalize book publishing.

The wheel is turning and it ain’t gonna stop.