[I almost never do this, but this guest post by Markus Almond compelled me to make an exception. Mark’s zine, Brooklyn To Mars (see link below), ain’t bad either. Thanks, Mark. I’ll be back next week  — Shawn.] 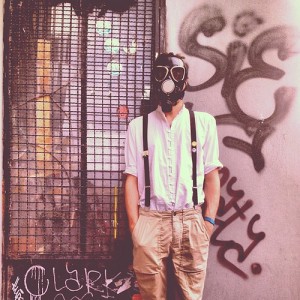 Our man in Brooklyn -- Markus Almond.

There was pounding on my door.  I clicked “file save” and got up from my desk to answer it.  “We’ve got an electrical fire downstairs,” my landlord said out of breath and visibly upset.  “Everything’s fine, you don’t need to evacuate but the fire department is here and they need to turn off the electricity.”

“Also, we just found out we have some serious electrical problems,” she said with even more nervousness.  “Unfortunately, we have to renovate the building and have to ask you to leave next month.”

Never mind tenant rights and the logistics of electrical wiring.  My story here is about minimalism.  When my girlfriend and I moved from Chicago to New York we spent $563.00 on a U-Haul truck and filled it to the top with our junk; furniture, CDs, DVDs, clothes and boxes and boxes of books.  It took us two days to carry everything into our apartment and another week to unpack and organize it.  I wished my landlord luck with the burning electrical fire downstairs walked back to my office.  Since the electricity was shut off a moment later, I found myself walking around my apartment, thinking about the logistics of moving again.  I didn’t want to pack all that stuff into boxes again.  I didn’t want to move it into a new apartment.

Over the course of the next month, I began to get rid of things.  I began making trip after trip to Goodwill.  On any given day, I had between 20 and 50 things listed on eBay and Craigslist.  I started to sell or donate everything I owned.  My girlfriend seemed concerned.  “Are you ok?” she asked.  “Are you sure you want to get rid of all these things?”  I did my best to put her mind at ease and reassured her that I was not suicidal.  In fact, I was headed in the complete opposite direction.

In Turning Pro, Steve writes about the time he moved from New York to northern California and had no TV, no radio, no music, no sex or sports or newspapers to read in the morning.  And he wrote for hours and hours every day.  This story struck a chord with me.  When I was younger and strapped for cash, I lived in a similar environment.  And the truth is I was much happier without having to work 50 hours a week to buy things I didn’t need.  Without a full-time job back then, I was able to get a lot more writing done.  But somewhere along the way, like a lot of people, I fell into the trap of working more hours to buy more junk.

I started to research minimalism; writers who lived in tiny apartments, artists who were completely self-sufficient, and a new term flying around the internet called “location independent”.  There were minimalist writers living out of suitcases and traveling the world.  There were writers publishing their own eBooks and writing full-time because their financial needs were so modest.  I had no desire to live out of a suitcase, but I did continue to purge my belongings.  I embraced an e-reader and digitalized my record collection.  And after I got rid of about 60% of my belongings something extraordinary happened.  There was another fire.

I spotted smoke before my landlord was able to warn me.  And this time, the flames were bigger.  The streets were shut down.  About 30-40 firefighters came and went in our building.  Before I evacuated, my reaction was level-headed and simple.  I grabbed my computer and the external hard drive that contained my music, pictures, important documents and unfinished novel and I walked out the door.  I watched the fire department put out the fire.  I watched neighbors pace the streets worried about their own belongings.  After I knew everyone was safe, the only thought I had was “I wish I would have sold the rest of my stuff sooner so I could have paid down my credit card.”  When the fire was out and it was all over, the building had very little damage and I went back inside to continue listing things on eBay.

Here’s the most important part of the story.  After I got rid of most of my stuff, my outlook changed.  My girlfriend and I moved into a smaller apartment and we were able to save money.  We cancelled our cable and saved money.  My office used to be cluttered with records and piles of books and papers and junk that took up space.  Now the only thing in my office is a chair, a desk, a computer and a printer.  And the most beneficial part of getting rid of my stuff was unexpected; I’m less dependent on a ‘shadow career’.  Since I have almost no desire to buy things, I’ve been able to cut down hours at my day job.  I now write several hours a day, reinvented my blog (www.brooklyntomars.com) and finished the first draft of my novel.  But what I’ve done is not important.  What’s important is how I was able to free up time and mental energy and how you might be able to do the same.

I’m not claiming that getting rid of your stuff will make you a better or more prolific writer.  But it will help to eliminate debt, distractions and dependence on a job.  I’ve written more in the past 6 months than I have my entire life previously.  Am I claiming that all writers should be minimalists?  No.  Do I care if Hemingway or Shakespeare’s writing space was cluttered with rotting garbage and infested with bugs?  Hell no.  It’s the work that’s important.  What I am claiming is that a simplified lifestyle is something worth looking into.  Becoming a minimalist has helped me and I believe it’s a valid tool for artists.  A pretty smart guy once said “When we turn pro, we give up a life with which we may have become extremely comfortable.”  And a character in a movie once said, “The things you own end up owning you.”