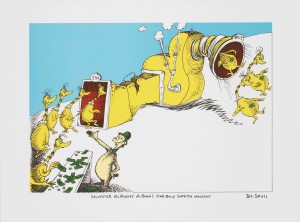 My first job in publishing was as editorial assistant (secretary/apprentice) to the editor in chief of a major publishing house (since dissolved and folded into a division of Random House Inc.). One of the first things presented to me was a very large pile of submissions that one and all referred to as the slush pile.

I don’t know the derivation of the term, but I suspect it has something to do with the irritating mixture of ice, snow, rain, and garbage New Yorkers have to slog through during the winter months—the slush that forms only minutes after the beauty of a fresh snowfall.

The slush pile is a heap of unsolicited manuscripts from would be Tolstoys dumb enough to submit their work to a publishing house without an agent or an “in” with one of the editors.  We had contempt for the people who sent this detritus our way and it was a real chore to slog through it and mail back the standard rejection letter of the era.  It usually began… “We apologize for the impersonal nature of this replay, but the volume of submissions we receive precludes our responding individually to each one…” and then it would end with some generic rejection that if done well would discourage the writer from sending anything else…ever. Remember I’m an old guy who started in publishing when the U.S. Mail and the typewriter were the primary means of conducting business.

While everyone in the house shared contempt for anyone who had the naiveté to send something unsolicited, there was a sort of “lottery” attitude about it that precluded direct statements of derision. I remember being rube enough to say something to the effect that dealing with slush was a waste of my time.  Not five seconds after I said it, my boss read me the riot act.

There was never a lack of slush and I never found the next ORDINARY PEOPLE.  To say that it was all illiterate and unpublishable, though, would be untrue.  And of course when you have people desperate enough to send SASE (self addressed stamped envelopes) in the hope of receiving a letter back in the mail saying “You are special and we want to publish your work!” a door opens for a certain kind of entrepreneur. Exploitation of such seekers of third party validation was inevitable.

Some literary agencies and fly by night publishers got the idea that a letter like the one above that implied hope rather than despair could be a money maker. By simply saying “We want to work with you to develop your manuscript as a possible title for our release…” could get people to cough up editorial fees or even pay just to have their stuff read (reading fees).

One agent, Scott Meredith, made it the bedrock of his business.  To be fair, he did bring in “editors” who would read the material, evaluate it and then provide editorial guidance to the hopeful writers.  But most of these editors had zero experience when they were hired. I know a number of people who got their start at Meredith.  And a few are very successful and hardworking big publishing editors today.

But when they began doing the sweat shop editorial consultation, they had little understanding of what makes a story work.  But after reading and banging out innumerable analyses, they learned the fundamentals of story. Some of the books from the pile improved enough to be sold to big publishing too. It’s important to note that Scott Meredith never forced anyone to buy the service/s he was providing. And a number of books that never would have seen the light of day did result.

Those of us in “real” publishing turned our noses up at what we viewed as disingenuous fleecing of the untalented. We were the gatekeepers and it was cruel to encourage losers to keep writing if they had no chance of ever successfully reaching a credible audience.

The credible audience was an educated one, one that read The New York Times Book Review and could separate the good “bad books” (genre books to be read as guilty pleasures on a Wainscot beach) from the real books (Joyce Carol Oates or Philip Roth’s latest or a tome du jour that won the National Book Award).

Today I see myself as lucky to have worked for an old school dime store paperback house that focused on the good bad books, but at the time I would have given my left arm to get the call to be part of the literati at Little Random, Knopf, Little Brown or FSG.

Dealing with slush was anathema to any respectable publishing insider. And like everyone else, I wanted to be respectable and admired for my ability to pick the silver from the dross.

Now just twenty years later, publishing has done a 180. The “credible audience” is going the way of Joseph Conrad’s Mr. Kurtz and those slushy submissions can no longer be discounted, ridiculed or ignored.

Here are two announcements from just these past two days to prove it. The first announcement about S&S is from www.galleycat.com and the second about RHPG is from www.publishersmarketplace.com. It’s important to note that neither of these publishing news sites existed twenty years ago.  Now they are read more widely than the venerable Publishers’ Weekly, Library Journal, Kirkus or Booklist…journals once crucial that have lost any real influence on the business.

Simon & Schuster has created Archway Publishing to help writers self-publish fiction, nonfiction, business and children’s books. They will run the new service with help from Author Solutions, the self-publishing company acquired by Pearson for $116 million in July. Archway Publishing will include “editorial, design, distribution and marketing services” for its authors, all these tools coming from Author Solutions. Fiction options range from $1,999 Author package to the $14,999 Publicist package. The business book options start at $2,199 and go as high as $24,999.

A year after reviving Loveswept as a digital-only romance imprint, the Random House Publishing Group announced three additional genre-focused digital imprints: Alibi, for mystery/thriller/suspense; Hydra, for science fiction & fantasy, and Flirt, for New Adult (i.e “targeting women in their twenties and thirties.”) Each imprint will publish original short content (ranging between 10,000 and 30,000 words) and short books (40,000-60,000 words) as well as previously published books for which author controls all print and digital rights.

“There are many readers out there looking for exactly what Loveswept offers—compelling characters and great stories published frequently at an affordable price,” said RHPG president and publisher Gina Centrello. “We are thrilled to expand this program.” Dobson added: “As publishing continues to evolve, with more authors finding their first home in digital, our challenge is to create new ways for readers to discover books,” said Dobson. “This dedicated team understands both the content and medium, and can effectively break out authors in the digital space.”

Alibi, Flirt, Hydra, and Loveswept are apparently accepting unsolicited submissions from authors, with details available here. The imprints tout that authors “will have a complete and unique publishing package” and that “every book will be assigned to an accomplished Random House editor and a dedicated publicist. They will also have the invaluable support of Random House’s experienced marketing and digital sales teams, who know how to reach out to and expand each book’s dedicated readership.”
RH eOriginals Page”

What does this mean? It means that big publishing now understands that if they do not service those interested in getting third party validation from them, someone else will.  And if someone else does and corners the market on fresh talent in the individual genres, the big publishers will be in trouble.

Better to build their own mini-self publishing operations than continue to allow Amazon, Kobo, Smashwords, B&N, and the rest take that market share.

Slush is no longer distasteful.  It’s a revenue stream.

If you’ve watched the videos Steve and I made about The Long Tail Business you’ll know that original manuscript for The War of Art was viewed by big publishing as akin to slush. They didn’t know what the book was or how to publish it so they rejected it out of hand.

I didn’t agree (I’d been around the block and recognized the fallibility of the experts) so I published it at my old company Rugged Land Books. But not without a lot of hard editorial/publicity/marketing work. I didn’t just throw it out there and hope for the best. I “published” it.

Today The War of Art is a vital backlist book that any of the big publishers would love to have on their lists. They don’t want to miss out on any new opportunities to have the next The War of Art, so they’re creating these self publishing portals to appeal to people who want to tell others that they are published by a division of Random House or Simon & Schuster.

If that’s you and being a part of S&S or RH is that important to you, these announcements should be music to your ears.

But it’s important to remember that when corporations that used to push artists away are now trying to pull them in, they’re are doing so for a reason. Their main gates may have fallen and all are now welcome inside, but the unchosen will always be the stepchildren of the anointed real writers inside the sanctum sanctorum.  Don’t kid yourself.

The bottom line is that the Corps are hedging their bets.  At long last they are recognizing that they need to own long tail bandwidth.  So they are appealing to outsider artists to get it. The thing is though that they don’t want to pay “slush” artists upfront, rather pennies on the dollar down the road. And some even have the audacity to get artists to pay them just to hand over their work.

Instead of trying to buy instant credibility and/or half hearted editorial/publicity/marketing services from big publishing, use that money and find one of the scores of highly skilled editors/publicists/marketers who’ve been jettisoned from that old machine. Pay them for their expertise, keep your copyright, and build your own long tail business.

You probably won’t hit The New York Times bestseller list, but you’ll control your own destiny and learn a helluva lot more than just writing a check and emailing your manuscript to some massive server owned by Big Publishing Incorporated. And waiting. And waiting…