“Eternity is in Love with the Creations of Time”

I only know Richard Ben Cramer from his work. But is there any better way? 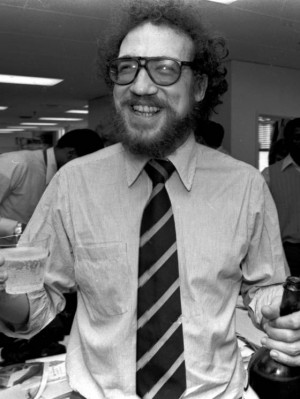 Yes, he was a highly regarded journalist and had that newspaperman countenance of one perfectly suited to live behind the mask of a byline. Pretty people just can’t write like the crooked toothed and wild haired.

But what made him a one man sales hook (It’s like Richard Ben Cramer…) among those of us who make our living inside of the very catty world of east coast book publishing was his guts. You see, old school journalists—and Cramer was one of the great ones in his early days—are taught to refrain from personal editorializing.  Let the reader draw his own conclusions.

It’s not easy to nail a nonfiction story in third person omniscient without the reader having any notion of the narrator’s point of view. Probably impossible. The closest that comes to mind is Death of a Racehorse by W.C. Heinz.

The tendency for all of us is to nudge ourselves into the story. If not brazenly dropping into first person singular at the get go, then weaving some telling adjective or adverb to push the reader to our way of thinking. It’s a sort of sub-textual un-italicized italics that is an indispensable widget in the polemicist’s or propagandist’s toolbox. For a whole lot of New Journalists too, the mannered “I” is a pose, an ironic way of commenting on something or someone without really taking a stand.

So in order to shield themselves from accusations of personal agenda and to avoid controversial categorization, what the highly educated “serious” journalist does is rip out any detail that could give away his own feelings about a particular event. Just the facts…who, what, where, when, why and how. With his advanced degree from Columbia after a BA at Johns Hopkins, Cramer learned and perfected that important standard form. He received the Pulitzer Prize in 1979 for his Middle East reporting at the Philadelphia Inquirer.

But like an Arbus, Beethoven or O’Neill, Cramer then courageously charted his own path. And somehow he found a way to abide traditional journalist craft as he broke every one of its rules. While delivering everyday WWWWH, he created timeless art. This is Cramer reporting the death of IRA martyr Bobby Sands in 1981.

“In a grimy gray drizzle, under ragged black flags that lifted and waved balefully in the fitful air; to the wail of a single piper, on streets winding through charred and blasted brick spray-painted with slogans of hate; by silent tens of thousands, past fathers holding sons face-forward that they might remember the day, past mothers rocking and shielding prams that held tomorrow’s fighters, past old men who blew their rheumy noses and remembered their own days of rage . . . Bobby Sands was carried yesterday to a grave of raw Ulster mud.”

And then there is his seminal narrative nonfiction work WHAT IT TAKES. Defying a sacred journalism principle, Cramer genuinely befriended many of the Presidential candidates in 1988 (Bush I, Dukakis, Gephardt, Dole, Hart and Biden). He needed to find out exactly what parts of themselves they would have to compromise, hide or amplify in order to make it into the Oval Office.

He even invented their internal thought monologues and presented them as “factual” nonfiction. He made value judgments. He didn’t let fear stop him from making seemingly unsupportable journalistic statements.

How could he not have been afraid of charting his own course? He must have been terrified. But he did it anyway. It was his faith in his skills and hard work that gave us greater truths about politics than anyone had before or since. He did it, not to show off, but to reveal his subjects…to make something so utterly fake human.

His follow up books on Ted Williams and Joe Dimaggio did the same for the other driving cultural forces of American life—celebrity and sports. He took those two icons off the pedestal and gave them back their flesh and blood.

Richard Ben Cramer moved the nonfiction needle. Lung cancer may have destroyed his body, but it’s defenseless against his work. As William Blake wrote way back in the 18th century…Eternity is in love with the creations of time.