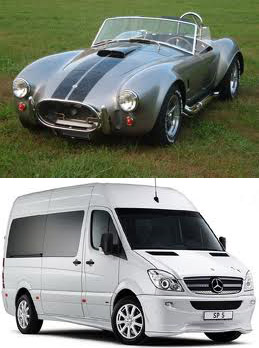 If your story was a car, what kind would it be?

I went to Los Angeles for a couple of days.  Steve and I try to meet every three months or so face to face and it was my turn to schlep the 3000 miles.

While we have a standing Monday afternoon phone conference, we’ve found that we get exponentially more done when we can read each other’s faces, interrupt one another’s thoughts and monologues. And it’s just a lot of nerdy fun.

We tell ourselves that we’re getting together to go over “business” stuff.  And we do. We balance our little bank account and plan when to publish stuff we have in the pipeline. We talk about dealing with “key man” insurance, rejiggering the Black Irish operating agreement, signing contracts, and hiring far more savvy consultants to do the important things that we just don’t know how to do.

The business stuff takes about an hour.  We have an unspoken pact that when it starts to take longer than that, we’ll pull back on the entrepreneurship and remember why we’re doing this in the first place.

Then the real fun begins.  We go into the garage to talk shop…Steve’s office.

It’s a privilege to gain entry into Steve’s workspace. Judging by the quarter inch of dust that’s collected on his knock-off Eames chair in the corner since my last visit and the neat piles of perfectly collated 3-to-4 page pieces of narrative on his shelves, I know Steve doesn’t let just anyone in here.

He knows I won’t go near the paper and that I know every single seemingly haphazardly messy pile of books, trinkets and junk is where it should be. Steve knows where everything is and can grab it all from his desk chair.

Talking about what we both love, crafting long form stories, is something we’ve been doing since 1996.  And his office looks exactly the same way it did back then.  He’s even kept the sliver of desk free that he cleared for me when we worked on Tides of War. I stick it on the table, power up my laptop and we get to it.

When we get together, it’s the equivalent of two gear heads hanging out with a ratchet set over an engine block.  What was really fun about this last trip is that we both had hoods to open and poke around in.

Steve’s next book is a sleek and powerful, lightening fast muscle car. I wasn’t sure what kind of car I had on my hands, only that I was excited about it.

We began with Steve’s.

Steve’s given me a very early look at a rough draft and he’s got one question.  One will lead to the next, which will lead to the next etc.  We both know what his question will be, but we love the Socratic theater of our editorial sessions too much to gloss over the ritual.

“If you had to sum up what this book means with the fewest words, what would you say?”

You’ll notice he’s asked me nothing about theme or characterization or dialogue or structure.  We’ll get to that stuff later. He’s asking me what kind of car I think he’s built—a jalopy on cinder blocks or a dragster.

He knows I’m not going to hold back my opinions and he knows there is no way I will bullshit him.  We’re too old for that. In fact, we both have projects that we’ve put in drawers after we’ve had one of these editorial sessions. It’s not all roses and sunshine when we go over this stuff. If his thing ain’t working and I don’t know how to fix it, I tell him.

We don’t want to break each other’s hearts, but sometimes we have to. No hard feelings. Seventeen years of an honest partnership is at stake. I’ll give it my all and level with him.

Yes, he’s spent almost two years building this narrative machine, but if it’s a clunker he has to know.  And he needs to know right now before he grinds himself into dust.

What he needs to know first—the bottom line—is if he successfully communicated the controlling idea of his story. Does the thing run?

What makes communicating the meaning of a story extremely difficult and requires genius is that it can never be literally stated. It must be delivered subconsciously to the reader/viewer/listener. It has to be shown, not told.  We know what Beethoven meant in the third movement of his Seventh Symphony. And we know what Francis Ford Coppola and Mario Puzo were getting at in Godfather II. Steve needs to know if his message made it across the great divide between artist and audience.

I give him three words. I could have given him two but without modifying the noun, I would have sounded like Frankenstein.

Steve relaxes.  Not because he’s done.  In fact, he’s probably four more drafts away from being done, possibly five or six. Each draft will focus on one particular element of the story that needs to be retooled. He knows he’s many miles from home, but he doesn’t fear the minutiae work.

He relaxes because a story just isn’t a STORY if the central meaning of it gets lost in the body of text. A work of art must magically transcribe from the creator’s mind into a meticulous ordering of words…or brush strokes…or notes…or zeros and ones. Then once read, seen or experienced by an audience, the controlling idea…the meaning of the story…must coalesce in the reader/viewer/software user’s mind. Without the writer spelling it out.

Steve knows that he can’t tell me what his book means and ask if I “got it.” I have to tell him what I got out of it.  If—as it is in this case—what I tell him is what he came to understand was the message of his book, the rest is bodywork, engine tweaking and electronics. (Unfortunately you don’t really know what the real meaning of your work is until you’re knee deep in pages.)

The tinkering is fun.  Hard work, but fun.

Great storytelling is like that Damon Knight short story that Rod Serling adapted for The Twilight Zone, the episode called To Serve Man.  The premise is that Aliens land on earth. Because they are an advanced life form, they’re able to communicate their thoughts to human minds without having to “speak.” This is just what Artists do.  They send deep messages to us subconsciously.

The ending of To Serve Man, is a brilliant “show” of the power Plato attributed to storytelling. And why he feared it. Yes, the costumes and set design are rudimentary (it was made in 1962) and the acting is not so great, but the story is just awesome.

Anyway, after I tell Steve that I think he’s built a 1966 427 Cobra level story, we get into the nitty gritty.  I make suggestions about the fuel injection, adding a spoiler, getting rid of the ashtrays, tweaking the power steering… He takes notes.  Because we’ve done this so many times before, we can talk in shorthand and after about two and a half hours, we’re done.

He knows what he has to do for the next draft.  He’ll do it, send it back to me and we’ll go through the process again.

We take a coffee break and then I show Steve a draft of what I’m working on.

But instead of offering his thoughts about my controlling idea, he comes at my work from the other side of the fundamental story question…the on-the-surface premise of the project.

What he means by this is if I had to do a thirty-second infomercial, what would be the promise of my story/product.  What will it do? Slice/Dice/Chop is seconds? Dehydrate fruit in minutes? Hair in a can?  It has to be that clear.

Instead of answering that question, which I didn’t want to think about, I give him an inventory of what’s going to be in the book. I tell him that what I envision is much more complicated than the Veg-o-matic and go on and on about it.

He smiles and reminds me that everyone thinks their creation will be so incredible and brilliant that only the smartest, most sensitive humans on the planet will understand what they’ve done.  Their work won’t be for everyone…just the best and the brightest souls who appreciate fine art.

The truth though is that making your work incredibly easy to describe and delivering on a very simple promise is what separates the dilettantes from the pros. The Veg-o-matic may have been sold in a way some would call down-market, but the thing delivers exactly what it promises…perfectly chopped vegetables.  A PhD and a high school dropout can both appreciate its simplicity and the art it took to convey it.

A book needs to do that too. It needs to capture the reader’s imagination as quickly as a Ron Popeil infomercial. The sizzle of the promise is as important as the steak of meaning.

What’s funny is that I’ve said the exact same thing to dozens of writers. Hearing it myself stings.  But it’s immeasurably helpful.  You’ll find that figuring out the question you need to answer to move your project forward is more difficult than actually answering it.

So we talked about what I’m working on some more and we figured out that what I was creating is the book equivalent to a perfectly organized contractor’s van.   It will be big and roomy enough to hold an entire workshop’s full of power, hand, and measuring tools. You have a clogged sink? The tool to fix it will be in the van… The promise is a tool kit to create.

It won’t win any land/speed records like Steve’s upcoming 1966 427 Cobra of a book. Instead it will be slow and methodical.  My project done right will be indispensible, the book version of a Mercedes Benz Sprinter cargo van with an extra high roof.

Looking at the two sides of the fundamental Story problem—how to create magical subconscious communication from writer to reader and how to promise and deliver practical high concept sizzle—is a blast when you’ve got two skilled Story mechanics in one room.

I think we could have sold tickets to watch us take apart and rebuild our stories. It was definitely worth the ten hours on an airplane.