We face two kinds of decisions in our lives.  These decisions define who we are as human beings.

Accomplished novelists/storytellers have a deep understanding of how to move their fictional characters to these two types of crossroads. It’s the same skill narrative nonfiction writers must have in their arsenal. Instead of creating events, the nonfiction storyteller must discern when real human beings have faced these choices, what decisions they made and how those decisions changed their lives permanently.

We do not live in an evil/good, joy/misery, satiated/starving kind of world. Never have. Never will.  Because we don’t—we always fall on a spectrum within the confines of each of these values—we rely on stories to help us figure out how to choose between two bad decisions or two irreconcilably good decisions (a phrase that my client Robert McKee uses and I love).

We model what kind of people we would like to be based upon our knowledge of epic stories. Stories are essential to negotiate a very complex world. They are what make us human. Neither horses nor papayas can tell stories, can they? If you want to become immortal, learn how to tell a story. Homer, Muhammad, Matthew, Luke, Mark and John anyone?

What do I mean by “The Best Bad Choice?” Here are two examples, one from the made up world and one from real life.

You’ve seen the movie Rocky? If you haven’t it’s a very simple set up.  The lead character of the movie is a Philadelphia Lunk named Rocky Balboa, a boxer with heart and a rapidly fading twinkle of talent. At the beginning of Sylvester Stallone’s screenplay, Rocky’s at that place we can all appreciate.  He’s accepted his station in life. He makes enough scratch from the local black hand as an enforcer to live the way he sees himself deserving to live . . . in a flop house with a sweat and bloodstained mattress propped on cinderblocks, two cans left of a six pack and half eaten slab of processed meat in the fridge.

Rocky still gets in the ring and even sometimes wins, but he’s really just . . . as my father used to say “getting Monday into Tuesday . . . Tuesday into Wednesday . . . and so on.” Stallone lets us soak up this mook’s life for a good chunk of pages before he gives us all what we know is coming.  Opportunity . . . THE BIG FIGHT . . . the inciting incident of every boxing novel/movie/story.

Rocky gets picked to fight the heavyweight champion of the world. Not because he earned it, but because of his silly pugilistic moniker . . . THE ITALIAN STALLION (do you think that choice of stage name had anything to do with his Stallone’s own scratching out a living in the adult film world?).

The chance to fight the big fight is what we all say we want, isn’t it?

We say to ourselves that given a lock, an opportunity, we’d be our best selves and kick some serious ass.  Would we though? Stallone knew that giving his fictional character the chance that we all want to get would seriously invest us in Rocky’s life.  Even a ballet dancer or billionaire would relate to this guy.

So where does the BEST BAD CHOICE come in here?  Rocky has no bad choice right? The Gods have intervened and given him something he always dreamed of . . . what could be bad about that?

In a brilliant scene that still sends chills down my spine, Stallone lets’ Rocky explain his situation to the arthritic, pockmarked old Irish trainer played by Burgess Meredith. There ain’t nothing wrong with archetypes/stereotypes if you do them right (specificity please) . . . and who doesn’t love the old battle-scared sensei? Even though Meredith’s “Mick” shamed Rocky by taking away his locker at the gym, it’s because he always expected more of Rocky . . . who he says had “moxie” before he became a bum.

When Mick comes to Rocky’s dump to offer his services as trainer, Rocky takes a long look at his situation.  He knows he’s being played for the patsy.  He has two bad choices.

The first choice is to fight the champ and get the crap kicked out of him.  The champ is the greatest fighter of all time and could very likely kill him with one accidental blow to his head. Not only could he die, at the very least he will be humiliated . . . he’ll become a barroom joke . . . not just in Philadelphia, but all over the world. That’s his first choice.

The second choice is seemingly not so bad.  He could beg off, tell the champ he appreciates the shot, but he’s just not at his level.  There would be no shame in that would there?  He’d be able to keep threatening welshers for his mafia boss and he could stay in his flop for the rest of his life. No one would blame him for that choice. Really only one person, two actually, would find that choice cowardly.

Rocky knows that choice, the second one, is death.  And he knows that Mick knows that too. Because even though Stallone never literally states it, Mick made that choice decades before . . . this is why Rocky and Mick are a perfect match to take on a power as great as the champ.

The best bad choice for Rocky is to fight. He can take a physical beating, but he won’t be able to live with himself with a psychological one. He’ll always be a bum, but at least he’ll be an honorable one. Mick knows this . . . this is why he dragged his ass to Rocky’s row house. 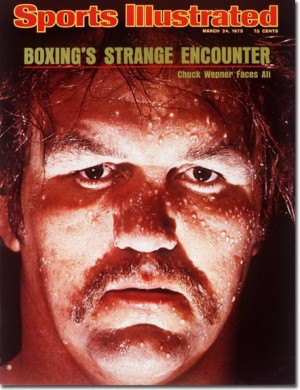 (Stallone was inspired to write Rocky by the life of the Bayonne Bleeder, Chuck Wepner, and his 1975 fight with champ Muhammad Ali by the way . . . )

A while back, two men in powerful positions in the U.S., one a member of Congress and one a Governor were faced with the same BEST BAD CHOICE situation.  Both men, as men seem to do over and over again, lost themselves in their intoxicating positions of being highly respected members of government.

A great number of people relied on these men, sacrificed for these men and believed in them. But if you had to boil down to the single other human being on the planet who believed in them the most, you’d have to say their life partners—their wives—sacrificed the most for them.

I’m sure their wives were not and still aren’t saints and that the relationships had all of the deeply serious challenges that any committed one does. But the fact is that there’s just one rule in a committed relationship that is unassailable.

You must remain faithful. You cannot cheat.

Both men were weak. They cheated on their wives.  They both made a terrible choice, one that they most likely continued to make over and over again until they got caught.  (I’m no psychologist, but it’s pretty obvious that everyday people, not sociopaths, do stupid things more out of self-sabotage than animus).

Both were caught cheating. One chose to call a press conference, admitted that he did so and eventually resigned as the Governor, probably destroying his political career for the rest of his life in the process.

The other said his computer had been hacked and denied that he did anything inappropriate. Eventually after overwhelming evidence that he was lying, the second man finally admitted that he not only did what he said what he didn’t do, but that he lied about it twice…once to his wife and then to the world.

Both men had to face THE BEST BAD CHOICE . . . admit a character defect and take the consequences or lie and maybe get away with it. One man’s bad choice was truly better than the other wasn’t it? The guy who came clean right off the bat? You have more sympathy for that guy don’t you? You’re more likely to give that guy a break than the other one wouldn’t you?

This is the stuff of humanity and by association art.  You must understand the concept of the best bad choice and artfully place your characters is these kinds of situations and have them choose.  The choices they make will tell the reader/viewer/listener what kind of person they are.

If you’re afraid of doing this, read this: “Art and Polarity.”

The flip side to the best bad choice is the concept of irreconcilable goods.  I’ll explain what that means in my next post.