My last post was about “best bad choice” moments. That’s the picking the lesser of two evils side of life that defines character through action. Having characters make choices and then act on them is what’s meant by “showing” (My mother spilled coffee on the subway car floor. She dug into her purse for a paper towel and some Purell then cleaned it up.) as opposed to “telling” (My mother is fastidious).

Don’t forget that you as creator have to make value judgments well in advance of beginning a project.  There is no wishy-washy spiritual cloak you can wear that will allow you to visit both sides of a conflict without choosing a side. Life may be shades of gray, but art is definitive. That’s why it’s The War of Art, not The Peace of Art.

Art is not about distraction. It’s not about consuming. No matter what the infotainment industrial complex tells you, it’s not about filling up the uncomfortable moments in your life with surges of Angry Bird video game dopamine.

Art is about taking an audience to the limits of human experience. To the extreme places they cannot go in their own lives (they’d die or go crazy), and leading them to catharsis…that indescribable emotional purge that connects us to the human primordial soup or collective unconscious or whatever you want to call it as it gives us clues to answer those impossible existential questions Who am I and Why am I here?

We live for cathartic experiences. They remind us that we are not alone that others have gone through the same shit we have and have lived to tell about it. Rothko, Arbus, Chopin, Austen, Plath, Lennon, Piaf delivered catharsis. That App that helps you find your lost cell phone—while really cool and I’m sure the result of a lot of hard work—doesn’t.

So how does a writer create catharsis? Paying attention to reality helps.

Men in uniforms take a woman’s two children. She pleads for their release. One of the men tells her he’ll let her take one of them back. She refuses to save one and not the other. She knows that both her children will die, but they won’t die alone. She will.

I don’t know if William Styron heard this horrifying testimony during the Adolph Eichmann trial in 1961. But I do know that his novel Sophie’s Choice reminded a friend of Steve and mine about hearing a holocaust survivor tell this story on the radio as a seventeen year old in Israel. This is what is meant by the limits of human experience in real life and in fiction. In the face of the most evil event any of us can imagine; the real mother chose to love her children universally.

Would we have had the courage to do the same? I suspect William Styron asked himself that question before he began writing.

Now the Yang to the “best bad choice” Yin is choosing between “Irreconcilable Goods.” I’ve stolen the phrase from Robert McKee, who has forgotten more about Story form than I will ever hope to know.

Making a choice between two “good” things sounds pretty great right?  No matter what you pick, a positive will come to the world.  It’s a no lose situation, isn’t it? But don’t Stories require conflict? How can a choice between two good things, not just drive a Story forward but actually create a catharsis?

But any good is just as good as another good, right? 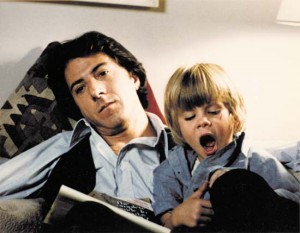 Dustin Hoffman and Justin Henry in Kramer vs. Kramer.

One of my favorite movies, Kramer vs. Kramer, starts with a double “best bad choice” scenario but then is all about irreconcilable goods.

Wife Kramer (an impossible part played brilliantly by Meryl Streep) is at a crisis point with Husband Kramer (played by Dustin Hoffman). Only problem is that they have a four year old little boy.

Is staying with her husband—a narcissist of the highest order who cares little for her and barely registers the existence of their son—until her boy is grown worse than denying her inner self? Wife Kramer thinks staying is worse. She’s gotta go. That’s best bad choice number one.

Now should she take the little boy with her? She’s an emotional wreck and has no idea of what she’s going to do with her life or how. So wouldn’t it be better to leave the boy with the father until she gets squared away? Wife Kramer thinks leaving the boy is the best bad choice. That’s number two.

Now left to care for the little guy after his hysterical wife flies the coop, Hoffman’s character has to make a series of irreconcilably good choices.

He can hire a full time nanny and stay on his career track as an up and coming advertising exec. Or he can take the kid to school, pick him up, make his dinner, clean up after him, discipline him, read him stories, and answer endless ridiculous and often impossible questions from his maddening four year old point of view.

Hiring a third party care giver would be good for Kramer personally and it would be good for his kid too. All of his hard work making something of himself will most likely lead to professional recognition, more money, etc.  And because of the money etc. his son will have privileges and opportunities in life that the older Kramer didn’t have when he was a boy.

He’ll be a great role model for his son…hard work pays off, stay focused!

But does his son really need that kind of role model when he’s four years old?

Doesn’t he just want his mom and dad there when he bangs his head on the coffee table?

So the other good choice would be to put the brakes on his career, take a lesser paying job, and make it to every school play. He’ll teach his son how to draw like his old man does for a living. He’ll get angry at his son for bullying the next door neighbor and then he’ll stand behind his boy when he knocks on the door to apologize… That would be a good choice too.

His son would learn that money and titles aren’t really that important if it means that a man can’t eat dinner with his family. Having someone to cry with about losing their mommy or wife trumps a key to the executive washroom.

Of this stuff are “irreconcilable goods” conflicts made.

If you don’t have a serious personal catharsis by the end of watching Kramer vs. Kramer, I feel sorry for you.