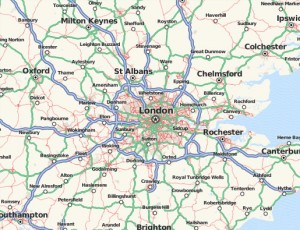 This isn't the map to use if you want to go to Frankfurt.

Like you, I look forward to Steve’s “Writing Wednesday” posts. I don’t ask to see anything early or cheat and read his stuff before it goes live.  I like to read them at the same time as the rest of the tribe. The truth is that if I didn’t know Steve, I’d still be on this site every Wednesday.

And I especially liked his most recent one about Seth Godin’s wonderful reminder about the importance of leading, “This Might Not Work.”

I read the comments too and there was a great question this week from Susanna Plotnick.

Steve, I’m having a hard time reconciling what you’re saying today with what you’ve been saying in recent weeks about ‘going from unpublishable to publishable.’

Could you elaborate on this, please?

I know Steve has great insights about this seeming paradox and I know he’s going to address it next week, but I thought I’d throw out my point of view in here. I make a chunk of my living sorting ‘publishable’ from ‘unpublishable’ work and I have some ideas about the notion of the “hack.”

The answer to the “where do we draw the line” question is something I call UNIQUE FAMILIARITY.  What that means is that a novel or work of nonfiction is attractive to me and to major publishers, “publishable,” if the book has a singular quality but is also within an established commercially viable tradition. It’s a serial killer thriller “with a twist” or a family saga about criminals. It’s a new take on an established form.

One of the great difficulties for publishers is to describe a new book in a way that sales people and ultimately consumers will embrace.  The way they do this is to make analogies.  They compare the work to something that has been successful before.  Phrases like, In the Tradition of… Or “If Sylvia Plath were to write a thriller, THE BELL JAR CONSPIRACY would be the result.” Seriously, get your hands on any publisher’s catalog and you’ll read this over and over again.  I know I wrote my fair share of this kind of copy.

Giving a reader the storytelling territory in which a book resides gives them an expectation. It’s just common sense.  When we go to an ice cream shop, they don’t just have a bunch of tubs full of ice cream without any explanation of what to expect.  One guy’s Vanilla is not the same as the next guy’s, but Vanilla as a label helps us understand the territory that the two artists are exploring.

What this ultimately boils down to is GENRE.  I can’t tell you how many times I hear unknowledgeable people in the business denigrate a writer for being a Genre Writer, the subtext is “what a hack.”  The truth is that every storyteller must have a comprehensive understanding of Genre.

If he doesn’t know the requirements and conventions of a particular story form, he’ll never create anything publishable.  And worse, he’ll never have the opportunity to play with the form, mash it with another genre, slightly alter it, or lead it in a new direction.  If you don’t know what something is, how do you know where you could improve or change it?

This is why my literary agency is called Genre Management Incorporated. I want clients who know their chosen genre/s backwards and forwards so that when I ask them why they made “the hero at the mercy of the villain” scene as their inciting incident in their thriller, they’ll clearly explain that choice. I don’t want to have to explain to someone that they can’t write a love story without having a falling out between the two paramours by the midpoint of the story. A mechanic doesn’t have to explain what a carburetor is to a car designer.

Genre conventions are akin to that old Chekhov line that if you introduce a gun in Act One, it better go off in by Act III. If you start writing a horror novel, someone better face a fate worse than death.

But how can you lead artistically if you work within the confines of genre? Or as Susanna asks, if a writer is “working on our own, creating new forms, breaking rules, aren’t we courting “unpublishability”? Where do we draw the line between courting publishability and being a hack…”

To me, here is the only difference between a hack and an artist:

What is often forgotten about Stories is that they are supposed to mean something.  That is, Stories are intricately planned long form arguments built on conflict.  They must have a controlling idea in order to even come close to that thing we all call art.

Writers with no controlling idea in their stories are hacks.  They create scenes and characters merely to entertain or excite the reader with no deeper meaning to be had beyond “isn’t this cool!” They are bottles thrown into the ocean with no messages inside.  Wouldn’t it be more interesting if a slam-bang read also had a deep resonate meaning underneath the artifice?

Steve’s books have that.  Every single one of them, nonfiction included. Plus Steve has written fiction in just three Genres—Sports, War Novel and Military Thriller. Has he been unable to lead? Gates of Fire singlehandedly revived an entire Genre. So did The Legend of Bagger Vance. If that’s not leadership, I don’t know what is.

I think it’s best for writers with no prior books published under their belt to refrain from trying to create new forms or break fundamental rules of Storytelling. Why not use a genre, or mix and meld a bunch of genres into something unique in order to SAY SOMETHING.  ANYTHING!

Hack work is easy to spot because it doesn’t promise any meaning beyond what is already on the page.  So Susanna, I think when Steve talks about “publishable” and “unpublishable” he’s talking about the art of creating a controlling idea or as Steve calls it, his THEME.  And of course, successfully expressing that theme underneath a familiar storyline is the work of a leader.

Writers can “Lead” with their THEMES while playing by the rules of their chosen GENRE/S. If you do this you will not only have a publishable novel, you’ll have a work of art. But as Seth also says “It might not work!”

So what! Write the next one and see if that one does. Be a leader. Don’t forget though that leaders have a plan.  They plot a course before they head into the woods. You should too.