George Packer delivered his version of the ever-popular “Amazon is destroying book publishing” theme in a recent long form piece in The New Yorker.

A consummate journalist and skilled writer, Packer’s points are compelling and consistent with Brad Stone’s reporting in his book The Everything Store, a book I wrote about a couple of weeks ago.

Here are just two nuggets about the company that hit me in the solar plexus:

1. Amazon’s “down with the Gatekeepers!” messaging is outrageously self-serving and hypocritical. While it publicly batters the snobby New York publishing establishment and the big five corporations that control it, Amazon holds these same companies up for extraordinary sums of money just to keep their BUY buttons live and in front of Amazon’s customers.

While “co-operative advertising” has been around for decades and is essentially legalized graft to get around U.S. Fair Trade and Anti-Trust regulations (don’t get me started), Amazon has perfectly the co-op “negotiation” to an art form.

As Amazon’s mean girls ridicule the publishers in the media as the arrogant enemies of egalitarian creativity, their schoolyard bullies are contemptuously shaking them down for their lunch money.

Who ultimately pays for the payoffs? Writers, of course. Less money equals fewer book slots and lower advances for those lucky enough to get one.

But the last I heard Random House has never threatened to stop people from being able to buy MacMillan books or vice versa. But Amazon pulled down MacMillan’s books just hours after their CEO John Sargent told them something they didn’t want to hear.

This kind of business Realpolitik doesn’t exactly warm the cockles of anyone’s heart.

2. Amazon’s mantra “we’re all about the customer” is about to be taken to odd extremes. What they really are all about is customer metadata. Repeat users get the promise of low cost/hassle free consumption. But the way Amazon delivers the value to Joe Average is to squeeze their suppliers (publishers and kitchen knife makers alike) and use predatory pricing to knock out their competition. (See the acquisition strategy for Diapers.com)

Once Amazon has crunched our metadata history, their plan is to anticipate our material needs/wants in the future and use non-human delivery systems to mainline it right to your door. Before you know you need/want it. Thus increasing their volume of sale (which gives them even more leverage over their suppliers) while decreasing their cost of goods sold (fewer employees, more drones). No, I’m not kidding.

Whoopee! Big Brother as toilet paper anticipator! And we were worried about totalitarianism.

I think we all get it by now. Amazon is not the benevolent Libertarian Prince of a corporation that it tries to persuade us it is. How many more long form pieces do we need to read to take this in?

At this point in the narrative, a question that I think is far more fun to explore is…How can Book Publishing Davids compete with the Amazon Goliath? What is its vulnerability?

Instead of whining and holding up Amazon as the boogeyman, why not take matters into one’s own hands and do something about it?

And I don’t mean running to another big Daddy corporation and fiddling with terms of sale. I would bet a few bucks that the debacle with Apple and Penguin’s 75 Million dollar fine for the whole Agency Model eBook disaster led to Pearson PLC’s throwing in the towel and agreeing to merge with Random House. So instead of six big players, we now have five. One less bell to answer.

Who ultimately pays the price for that huge balagan? Writers, of course. Big fines squeeze advance coffers. Fewer dollars in the acquisition larder lead to fewer books acquired at smaller levels of advance.

And so here we are…when so many incredible books are rejected by big publishing because they don’t have the potential to be New York Times bestsellers within eight weeks of publication. I’ll remind you that fourteen years ago, The War of Art was rejected by every major publisher. That’s not to say they weren’t right. It did take twelve years and 300,000 copies sold before The War of Art hit the New York Times bestseller list.

Do you think the big five may be passing on other books like The War of Art today?

Just about every single person in the book publishing industry—from the heads of the big five to independent bookstore owners to the third assistants of powerhouse literary agents, not to mention writers—chooses to keep on keeping on the same way they always have. By doing absolutely nothing about it.

How about coming up with an alternative experience to Amazon’s ubermachine? How about some humanity? Some good old-fashioned nose to the grindstone innovation?

How do you do that? Simple really. Give people something to care about, something to believe in, something that makes them feel good about buying a book from you and not a vacuous corporation.

The fact is that Amazon is a great manipulator. It combines two age old sales tactics, the “we won’t be undersold” come on and “the customer is always right” guarantee. And through a mind-bendingly brilliant use of technology and cheap labor, it has scaled its systems in just about every product category you could think of.

But what Amazon doesn’t do so well is inspire. I don’t know about you, but I feel no wind beneath my wings when I buy shampoo at amazon because I’m too lazy to go to the drugstore.

Now I respect Jeff Bezos and I’ll bet he’s a nice guy in a social situation and I would love to meet him, but I don’t “get him.” I don’t know why he’s doing what he’s doing. Or how or why he’s programming his in-house Jeff Bots to stay on message for him. I can find no compelling human value associated with Amazon, beyond instant or near-instant gratification. And as values go on the soul-affirming scale, it’s pretty lame.

That whole down with the Gatekeeper thing is really just another come on to dissatisfied writers to use Amazon’s self-publishing services. They’re awesome and I use them too, but the reason why is a feint. It’s not inspiring.

And as his company is so secretive, chances are I’ll never really know the there, there.

On the other hand, I think Steve Jobs was probably not so great in a social setting. But I always got what he was trying to do. And it had nothing to do with instant gratification.

Jobs valued precision and passion in the service of building material possessions that could enfranchise individual human beings. Not “customers.” Say what you wish about his personal choices when dealing with his fellow man, but the guy stood for something. Engineering insanely great things above all else. 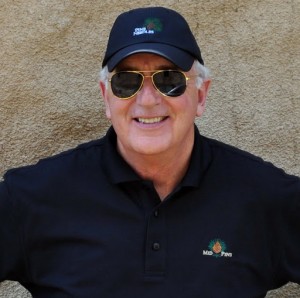 Similarly, you may not agree with everything that Steven Pressfield writes or go crazy for everything that our company Black Irish Books publishes, but I doubt you think that Steve’s doing it to gratify people. He does it to inspire.

He’s certainly not showing up every Wednesday with a fresh piece of writing that benevolently kicks us in the ass for the money. That stuff’s free. And he’s not actively hunting down people he thinks have a very important message to share and helping them communicate their philosophy in book form for fame. Callie and I had to full court press him to do the Oprah interview. He pumps proceeds from one project into the development of the next one and refuses to be anyone’s “guru.”

I think he does it because we all have something to contribute to the collective unconscious and we also need someone to nudge us to sit down and do it, to fight the inner war and get it done. The last thing Steve would do is to tell anyone else how to live their life, so instead he writes and publishes books to help them find their way…their way. He has a Take what you need and leave the rest philosophy. And if you need none of it, that’s cool.

The fact is that Steve Pressfield has no idea how all of the money works. And doesn’t care to know. He just wants his books (the ones he writes, edits and publishes) to be as near perfect as he can make them. It’s not that he’s incapable of following the money trail or making a cold hard business decision, it’s that it doesn’t interest him. He’d rather have a root canal than talk about return on investment or unique visitors or page views.

As long as Black Irish pays its bills and works with people who share his love of the game, Steve’s in hog heaven. Some months he’ll even get a profit sharing check and he can’t believe his good fortune!

If Amazon isn’t really in business to dismantle the Gatekeeper apparatus that they themselves profit from, or to actually inspire customers rather than manipulate them, why does Amazon do what they do?

It’s gotta be about more than money…right? I’m positive it is, and the answer definitely resides inside Jeff Bezos. Why doesn’t he tell us? Does he even know it himself?

So back to the original question. How do you compete with Amazon?

Do what they don’t do and be clear about why you’re doing it.

Inspire people to embrace their better selves…not just the one demanding instant gratification…and you’ll be satisfied. Not necessarily rich, but satisfied.