How We Got the Deal Done

So Steve and I both recognize that Giora Romm’s Israeli bestseller, TULIP FOUR, is the perfect Black Irish Book. It epitomizes the WHY of our little operation. Anne Hartstein Pace did an amazing job with the Hebrew to English translation and, with some editorial work to make it more in keeping with the American market, it’s got what it takes to be a classic. 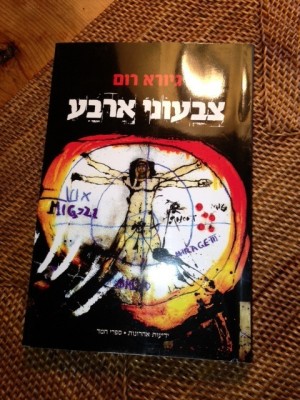 The Israeli cover of Giora Romm's SOLITARY. The title in Hebrew is TZIVONI ARBA, "Tulip Four."

Black Irish doesn’t own the rights to the book. We’ll have to somehow convince Giora to make a deal with us. While Steve and Giora are friendly, Giora would be nuts to sign with us just because Steve’s a nice guy.

Obviously, Black Irish Books is not Random House. We won’t be able to toss out our imprint name and have instant credibility. But if we’re going to publish a book like this, we damn well better act as if we are Random House. This book is in the exact same arena as the blockbuster bestseller Unbroken by Laura Hillenbrand as well as Lone Survivor by Marcus Luttrell and A Higher Call by Adam Makos and Larry Alexander. Plus a very long list of other backlist performers from decades past. That’s our goal…to give the book a backlist life…not to become Unbroken. That’s a bridge too far for us.

While there is a huge potential market for this book, in order to reach even a small slice of it we’ll need to pull out all of the traditional stops that the Big Five use just to get people to notice it. More on those later.

That doesn’t mean that Steve and I have to run to our respective mortgage brokers and double down on our personal equity to publish the book. We won’t be able to write a big check to induce Giora to publish his book with us like a major publisher could. This is the big rub for mini-publishers like Black Irish.

We have limited capital. We use what cash we have to create the books themselves…the covers, the interior designs, the eBook conversions etc. Whatever surplus we have after that, we reinvest for the next title.

Now if someone told me in 1992 that this limitation would prove to be the biggest asset for a twenty-first century publisher, I’d have laughed him out of the room. But it’s true. Having limited money today is a huge advantage.

It keeps you honest.

You can’t throw money at a project because you think it will sell or because it would be good for your ego. You can’t indulge those specious reasons if you have no green. So every project you pick must meet an incredible personal and specific set of standards. And to even get the project in the first place, you have to summon all of your creative gifts to convince the other party to work with you.

By the time you’re ready to actually publish the book, you’ve toiled relentlessly just to convince yourself and the other party that it’s not just a good idea to work together…it’s essential to do so. So by the time the book goes on sale, you have no regrets. You shipped something tremendously important to you and that is HUGE!

While we don’t have the money that Random House has, we have something far more valuable. Between us we have over a half a century’s worth of experience in book publishing on every single side of the operation (author, editor, agent, publisher, production, art, publicity and marketing). And after all of that time, we’ve both figured out that there is only one indispensible element to publish a book properly.

What that means is that Steve and I:

We must also be willing to:

We have to be willing to press the book into the hands of anyone…without reservation. Not to get a sale, but to share what we value. We have to believe that people who read the book will be changed by it. That they will find the cathartic experience we both had after we finished it. That it will give them a lift and encourage them to keep fighting against Resistance. That’s why Black Irish Books exists.

And what we’ve found is that if we commit to doing whatever we need to do to bring the book to 10,000 people (more on this magic number in another post) and have zero hesitancy to call in any favor that will help us get there, then we’ll have done our job. That’s the publisher’s job today. Not paying for co-op to get on the front table at Barnes and Noble for two weeks. Getting it to 10,000 interested people within its particular genre. After that, the book is on its own.

Not to cast aspersions on the Big Five, or more importantly the people who work there, but rarely in my years in that super-flush sanctum sanctorum of certifying literary value did I ever witness anyone in those companies put their reputations as publishers (let alone human beings) on the line for anything.

Money? Sure, they spent plenty of money and made up plenty of “six-figure marketing campaigns” to show their seriousness. I used to acquire titles for millions of dollars back in the day.

But few put their personal ass on the line for anything.

Why would they? They were just employees. No matter what title they had.

And as such, it was and still is their intention to keep their job…not to upset the apple cart and throw down on some single title. They were there and are there to keep up the reputation of their esteemed imprint…not any one title. To be fair, I only went all-in emotionally for one book when I worked in that environment. After that, I didn’t have the strength to stay “objective” anymore.

That’s why I left. I walked before they made me run.

Just to be clear. Personal commitment may be at a premium at the Big Five publishing houses, but forget about it entirely at those places that take fees just to pump you into the electronic and/or Print on Demand oceans. They have less than zero interest in any one title. They are all about the fees.

Steve said it best about what it takes to publish with vigor,

If I’m on my deathbed asking myself, “Did I ever do anything worthwhile in my life?” and I can say “I helped publish Giora Romm’s SOLITARY,” I will kick off as a happy man.

Once we explained not just how much we loved his book, but of how much we needed to publish it to further our own goals for Black Irish and of how we planned to do that, plus worked out an equitable financial deal that divides up the proceeds of any revenue generated from the sale of the book using a 50/50 paradigm as our guide, Giora took a chance and also said “Yes.”

Now how do we make a book written by an Israeli fighter pilot about a terrible ordeal that happened to him forty years ago in Egypt, something Joe Schmoe from Kokomo will care about in the U.S.?

We had to act As If we were Random House.

More on that in the next couple of posts.