[Don’t forget to check out the Great Black Irish Christmas Sale, featuring the brand-new, leather-bound, signed and numbered edition of The Legend of Bagger Vance.]

Continuing our 20th-anniversary look-back at the writing of The Legend of Bagger Vance: 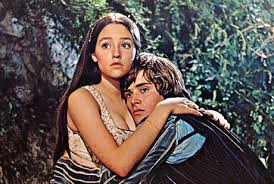 Olivia Hussey and Leonard Whiting in Franco Zeffirelli's film of "Romeo and Juliet."

We were talking last week about stealing the structure of works we admire. I was confessing that, for Bagger, I had shamelessly ripped off the premise and spine of the Bhagavad-Gita. Now let me admit a further theft and an additional bonus:

When you steal a great story’s structure you also get its characters. See Romeo and Juliet, Jesus of Nazareth, etc.

When I poached the structure of the Gita, I got as a bonus the two principal characters—Arjuna and Krishna—and I got the dynamic of their relationship: the mentor-protege story. I also got the story’s Villain—Arjuna’s internal demons of self-doubt and self-condemnation. (If we were stealing the structure of Romeo and Juliet, we’d get the characters of the two lovers and their personal and societal allies and antagonists, i.e., Mercutio, Tybalt, Friar Lawrence, and the full cast of Montagues and Capulets.)

In the case of Bagger, that meant I got as a hero the brilliant but self-tormented champion Arjuna … and, as his mysterious guide and mentor, Krishna—who also happens to be God in human form. Not bad.

And, even better for the drama, I got the idea that the character of the All-Knowing, All-Powerful Almighty appeared in human guise as a servant, as a humble charioteer (or, in his rejiggered form as the character of Bagger Vance, as a caddie.)

This gave me a dramatic element that didn’t exist in the Gita. I could write scenes in which Bagger/Krishna/God was condescended to and even abused and humiliated by ignorant, clueless characters—and I could have Bagger/Krishna/God respond. Not bad either!

(Oh, and by the way, lest we imagine that Shakespeare would never stoop to shoplifting prior material and that he invented Romeo and Juliet himself, let’s bear in mind that the literary canon circa 1584 was loaded with legends of Doomed Lovers going back to the ancient Greeks and beyond, the most famous perhaps being the love story of Panthea and Abradatas—my own all-time fave, which I cannot read without weeping—which ends with a tragic death/suicide scene almost identical to the climax of Romeo and Juliet. In other words, the Bard was as shameless a thief as I am and as I am urging you to become. And could we but summon his shade and beseech it for wisdom, I have no doubt that Will’s ghost would declare for us, “Forsooth! Purloin everything in sight, kiddies!”)

But back to me as a thief. I also make no bones about brigandizing three major scenes from the Gita. (Remember, it’s not stealing if you put a new and original spin on it.) And ya know what? It worked. It all worked.

And it was all absolutely conscious and deliberate.

Now you may be saying, “But, Steve, isn’t it dishonorable … in fact isn’t it cheating to snatch the throughline and dramatis personae from an existing work?” I will answer with two questions:

1. Is there any more original songwriter from the mid-20th century till now than Bob Dylan?

2. Has anyone stolen/borrowed/burgled more ideas, themes, musical genres from prior (and current) musicians than the aforementioned Mister D?

And remember, we’re not apprehending material and slavishly cloning it. We’re simply taking a work that came before us and using it as a model for our own new work. If you and I set out to build a bridge between Greenport, Long Island and Old Lyme, Connecticut, will we or will we not study the engineering blueprints for the Golden Gate and the Verrazano Narrows bridges? What if we have a footing problem with unstable soil close to shore? What if the Golden Gate faced the same problem and solved it? Will we ignore the engineers’ solution?

In any innovate enterprise, we the fabricators will run into problems. Wouldn’t it be great in those moments, my fellow screenwriters, if we could phone up Billy Wilder or Orson Welles and ask their advice? How much would it be worth to us, my fellow novelists, if we could reach out for counsel to Scott Fitzgerald or Fyodor Dostoevsky? We can, of course. We just have to read The Great Gatsby or watch Double Indemnity.

What happens when you and I borrow a narrative structure or a set of characters is that we get a template. We can use part or all, or we can reject it all. But how reassuring and confidence-inspiring is it to know we have that template, that we possess that road map?

For me, foolscapping Bagger, I was able before I had written a word to block-in the genre, the theme, the two principal characters and the dynamic between them, the inciting incident, the antagonist, and the climax—all lifted shamelessly from “the underlying material.”

And here’s the amazing part: in the end, of all the buckets of e-mails and letters that I got after Bagger Vance came out, it was not until way beyond the thousandth that one correspondent finally wrote, “Hey, Steve, am I nuts or is this book based on the Bhagavad-Gita?”