I start this post with an apology. In it I’m gonna cite something from my own work. I hate it when writers do that. “Use Tolstoy, man, or Shakespeare! We want something good.” 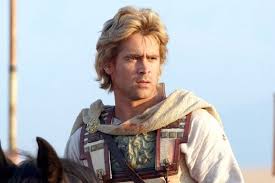 Colin Farrell as Alexander in Oliver Stone's movie of the same name.

But I gotta do it because in this instance I don’t have to speculate as to what the writer was thinking: I actually know.

The theme of today’s post is a continuation of the previous two: Killer Scenes and how to build them out into the global narrative that they imply. In this case, I’m going to address not a scene, but just two sentences.

The question we’ll be asking is: When we as writers have only one scene, or even just a fragment of a scene, how can we extrapolate from that the entire work? How do we build out the complete book from that single kernel? What mode of thinking do we employ?

First, let’s start with the Muse. I believe categorically that scenes and lines that pop into our heads come from some cosmic source. You may disagree. But that’s my story and I’m sticking to it. So when some electrifying scene or fragment suddenly appears in my consciousness, I take it as a penny from heaven, a clue in a mystery, a strand of DNA in a scientific experiment. Embedded in that microcosm is the Global Enchilada.

One day about ten years ago, two sentences popped into my head.

I knew immediately that these were the first two sentences of a book. And I knew I loved the book. But I knew nothing else. I didn’t know who the speaker was, or what the story would be, where it was set, nothing. Here are the two sentences:

I let these sit for a couple of weeks. From time to time during the day I’d come back to them, always asking myself, “Who’s the speaker? Who’s saying this? What does it mean? What’s the book that these sentences are the start of?”

I couldn’t get an answer. Either nothing came or what came didn’t ring a bell. Then one day, I can’t remember exactly how, I suddenly knew with certainty: the speaker was Alexander the Great.

I didn’t know anything about Alexander the Great. I had never studied him. He was certainly not a figure I was preoccupied with. Nor did I have any conception of how a story about him would resonate with modern readers, or if they would even care. Would a book about Alexander sell? Would anybody besides me be interested?

Okay. Back to extrapolating. What can we as writers say from our two sentences out of the blue?

For sure we’ve got one thing: the identity of our protagonist. And we can deduce from the sense of the sentences two other critical elements.

First, the story will be told in the first person by Alexander. It has to be because “I have always been a soldier” is him speaking. The sentence is in his voice.

The other Big Thing we know is that the story’s slant will be military. Why? Because he, Alexander, says so. “I have always been a solider. I have known no other life.”

This last point may seem so obvious as to be barely worth noting. But it’s not. It’s absolutely critical. The subject of Alexander, keep in mind, can be addressed from many, many angles—political, psychological, historical. Mary Renault’s The Persian Boy was a first-person account of Alexander’s life told by his eunuch lover, Bagoas. Her other renowned work on Alexander, Fire From Heaven, was centered in the conqueror’s early life and the psychodynamics of his family. Oxford historian Robin Lane Fox’s Alexander the Great, which served in part as the basis for Oliver Stone’s movie Alexander, was an all-inclusive historical biography, as was classical scholar Peter Green’s Alexander of Macedon.

Clearly our book is going to be none of those. But what will it be? From our initial two sentences we have, so far, three key narrative elements: we have our protagonist, we have our narrator, we have our point of view.

And we have a fourth Big Thing: the actual historical facts of the protagonist’s life. If the book is going to be about Alexander, and if he is going to tell us his story as seen through the lens of a soldier, then implicitly we’ve got a number of real events that we know must be in his narrative. And, just as important to us as writers, we have other events that we know will be left out. Family stuff, politics, philosophy: we can probably jettison them. War and conquest: these we’ll keep. Alexander fought at least three world-altering battles—the Granicus River, Issus, and Gaugamela. Clearly these must be in the story, not to mention Chaeronea, the battle of the Hydaspes River in India, and the assault across the Jaxartes in Afghanistan.

Remember my post a few weeks back, “The Clothesline Method?” If we string our line from Story Start to Story Finish and hang on it just three or four of these battles, we’ve got, in page-count terms, at least half of our book already. Not bad.

What about theme? Let’s dig a little deeper into those first two sentences.

Embedded in this phrasing is the idea of destiny. “I have always …. ” “I have known no other … ” The sense in these sentences is of a fate or calling established at birth or even before. These twelve words have a momentum as well, like notes in a melody. Here are the sentences I followed them with, trying only to sustain the tune:

… All that I know [of warfare], I knew at thirteen and, truth to tell, at ten or younger. As a boy I instinctively understood the ground, the march, the occasion, and the elements … the drawing up of troops came as second nature to me: I simply looked; all showed itself clear. My father [Philip of Macedonia] was the greatest soldier of his day, perhaps the greatest ever. Yet when I was ten I informed him that I would excel him. By twenty-three I had done so.

The Greeks had a word: daimon. The Roman equivalent is the Latin word genius. Both refer to an inhering spirit—divine in origin, all-knowing yet itself unknowable—which appears, twinned with us from birth, and guides and inspires our passage throughout our lifetime. If there ever was an individual whose career embodied possession by a daimon or a genius, it was Alexander.

What was Alexander’s daimon? Ambition? Lust for conquest? The passion for ultimate ascendancy to the point, even, of being called a god?

Could this daimon be our antagonist? Is this the real force that Alexander fought against, more so than even the physical kings and armies he conquered?

If the answer is yes (and my instinct tells me that it is) then we can safely say that from just two sentences, twelve words, we have identified our protagonist, our narrator, our point of view, probably two hundred pages of story, our theme, and our villain—with a lot more, we hope, still to be unearthed. The goddess, we must admit, knows how to pack a lot of dynamite into a very small package.