If you were to somehow plot all of the Stories that have ever been told, what would it look like? 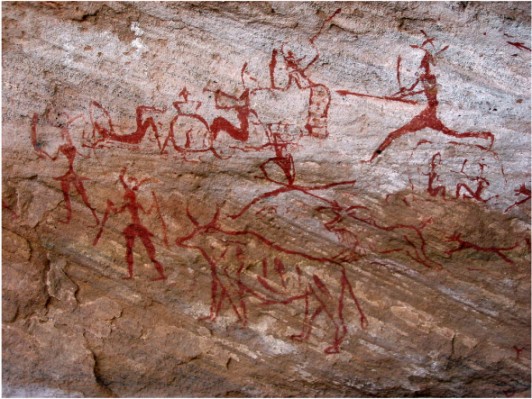 Here’s what I think:

It would look a lot like other natural phenomena such as the distribution of height in human beings, or blood type or women’s shoe sizes. The graph would look like a bell curve, in statistics what’s called a normal distribution (or Gaussian distribution).

I think that makes sense because Stories are as natural to human beings as air or water.

In order to map “Story” though, the first thing you’d need to do is figure out how to judge the stories, right? This is where Genre comes in.  As I’ve written elsewhere, I subscribe to what I call Genre’s Five-Leaf Clover.  You can read more about it here.

But let’s not go too crazy.

Let’s just boil all of Story down based on just two criteria.  How about we evaluate the general popularity/commercial appeal of a particular story along the vertical axis, or the Y-Axis, versus the varieties of Story structure on the horizontal/X-Axis?

So the further up the Y-Axis you move, the more appealing the story will be to a larger and larger audience. That is, the Y-Axis is a reflection of the relative popularity of a particular story structure. The higher up the vertical dimension; the more people will buy/watch/read the story. Simple.

Let’s make the West/East X-Axis, the horizontal one, represent the three main structures—Arch-plot, Mini-plot (often referred to as Minimalism) and Anti-plot. 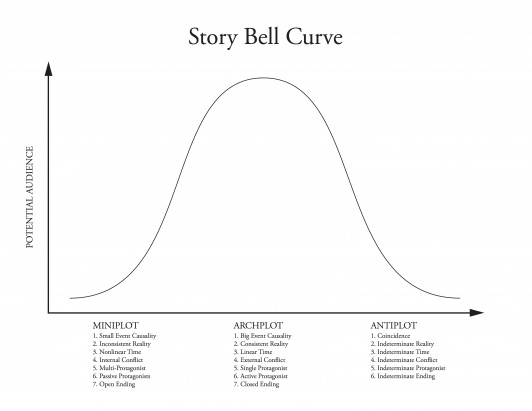 I recommend that you consider where your Story sits on this Story bell curve. Before you write your first draft and after you have one to edit.

Is it a pure Arch-plot?  One where your lead character faces primarily external forces of antagonism, with no inner demons to torment her? Something like Live and Let Die?

Is it pure Mini-plot?  One where the inner torment of the lead character is so overwhelming that he refuses to engage with the real world?  Like Leaving Las Vegas?

Could you shift the focus of your story to find a sweet spot between your literary ambitions to plumb the depths of inner angst and a potboiler plot that would attract a critical mass of audience?  Something like The Silence of the Lambs?

It’s important to think about the potential appeal of your chosen story terrain. Because understanding the coordinates of your Story will be immeasurably helpful for you to home in a spot in the marketplace that makes you comfortable.

Knowing the relationship between the CONTENT genres and the STRUCTURE genres will save you from much pain later on. If you know up front that the potential audience for your story is small, you won’t freak out when you don’t hit the bestseller list.  Instead, you’ll be pleased to find a small tribe of people who fall head over heals with your story.  A select group who understand what you have set out to do and of how you were able to pull it off.

Ask the average Joe to explain Gravity’s Rainbow or Infinite Jest and you’ll be met with blank stares.  But ask someone at Pravda Bar in New York’s Soho district and you’ll get a half hour diatribe.

Generally, the external content genres (Action, Horror, Crime, Thriller, Love, Performance, Society, War and Western) live inside the meaty middle of the Story bell curve, while the internal content genres (Worldview, Morality and Status) tend to move toward the outlying/thinner sections of the curve of Mini-plot and Anti-plot.

When you do a combo plate of external and internal, and you do it well, you’ll find that you’ll pull audiences from two sides of the graph. And even find synergy, when the whole exceeds the sum of its parts.

But no matter how incredible an absurdist Anti-plot Story may be, the potential audience for it is small.  Which is fine as long as you know what you’re getting into before you sit down to write it.  Charlie Kaufman doesn’t write screenplays that he expects will do over a 100 million dollars in box office their first weekend.  So when they don’t, he’s not disappointed.

If you’re going after the idiosyncratic and you find that many readers of your work just don’t “get it,” don’t fret.  But don’t expect to reach number one on The New York Times bestseller list either.

In addition to managing your own expectations, understanding where your story sits on the Story Bell Curve will tell you to whom your work will eventually be marketed and why.  It will prepare you for the business of selling your Story to either a publisher or a select group of readers.  But most importantly a comprehensive understanding of the Story bell curve will help you match what you want to say with the best way to say it.

For example, at the onset you may think the Horror Genre best serves your controlling idea/theme about the insidious nature of mass media. But after refreshing your knowledge of horror and the Grand Guignol required to really pay it off, you may find that it really would be much better served if you approached your work as a Love Story/Political Social Drama instead. Perhaps Paddy Chayefsky had that inner debate before he began writing Network.  Knowing the breadth of Story possibilities and the limitations of each genre will focus your energy and pinpoint exactly where your Story will best live.

Needless to say, no story ever aligns perfectly with a single genre structure, and like Heisenberg’s uncertainly principle, the closer you analyze and pick at a particular story to classify it, the more it moves away from your microscope.

Also remember that those structures and their corresponding content genres with the greatest potential for a large audience are also those that are the most difficult to innovate.  This is why big canvass Action stories are so coveted by Hollywood.  They are nearly impossible to re-invent. So give some props to those who are capable of doing that work.  It’s as hard to come up with a great and convincing pure Action story, as it is to write The Corrections.