The Second Draft (Is Not a Draft) 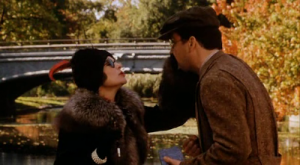 Congratulations, you now have a first draft, the raw materials for your Story.

The first draft is what Steve Pressfield calls “covering the canvass.”  It has nothing to do with anyone else but you.  Refrain from talking about your first draft or any particular section or sentence you recall fondly from it to any outsider…even your spouse.

You’ll probably end up cutting or changing the best parts or lines anyway and there is definitely something to not voicing creative work until you’ve thrashed it out until you’re, if not satisfied, exhausted.

When your friends ask, “How’s the book coming along?” just smile and say, “I’m making progress.”  Leave it at that.  If they press you for details just say that you are a superstitious person and that you made a pact with yourself that you won’t talk about the work until it’s ready for other eyes.  When they ask when that will be, you can say, probably after about five drafts.  Then get out of the conversation.  If you can avoid it, and I highly recommend you do, don’t tell them anything about the project.  Not a title, not a concept, nothing.

I can’t tell you how many writers, myself included, who regret saying anything about their works in progress.  I’ll tell you why.  You cannot “pitch” a project that is not complete.  You’ll inevitably screw it up or worse, fudge it and recast it to please your audience.

And when you get back to your desk the next day, you’ll feel like shit.  You’ll feel like you’ve betrayed the work that you’ve already done.  Pulled off the towel and revealed the naked truth of it…that it’s half-baked, it’s derivative etc.

The fact is that your first draft and/or notes on writing the first draft aren’t even close to half-baked.  You are merely pulling together the ingredients to make something later on.  How can you describe a brand new kind of cake if you haven’t made it yet?  You can’t.  So be quiet.  The first draft and everything in your head that is swimming around on the entire project is sacred.  If you can, don’t even tell anyone that you’re writing.  Seriously.

Okay, so now you have a blob of material called a first draft.  You have no idea if any of it is working.  You don’t know where the problem areas are, nor do you know the strengths of the work either.  How can you possibly figure that out?

Here is a truth I discovered over twenty-five years or so:

THE SECOND DRAFT ISN’T EVEN A DRAFT!

If you take that truth to heart (you won’t really until you’ve ignored this advice at least five times), it will save you from a lot of pain.

That doesn’t mean what I’m going to tell you to do will be easy.  It’s extremely time consuming and difficult work and at times you will curse my stupid methodology and me and abandon it.

You’ll go back to it, though, sooner than you think.  I know it.

Because when you do do it, you’ll grow immeasurably as a writer.  When you’re through with THE SECOND DRAFT THAT ISN’T EVEN A DRAFT, you’ll look back at the way you used to work, shake your head and cringe.

So what is THE SECOND DRAFT THAT ISN’T EVEN A DRAFT?

It’s Editing.  Here is something right off the bat about Editing that you need to understand:

EDITING IS NOT RE-WRITING. IT’S COMPLETELY DIFFERENT. AND MORE IMPORTANTLY, YOU CAN LEARN HOW TO DO IT YOURSELF.

Here’s something else you need to know:

Writing, though, is a creative, no-holds-barred, subjective, right-brain skill.

Don’t try and Edit and Write at the same time.

I you do, you will quit in despair.  No matter how much progress you think you’re making as you grind through your sentences, paragraphs and scenes flip-flopping between the two disciplines.

You’re probably nodding your head in complete agreement now, but when the times comes to begin work on THE SECOND DRAFT THAT ISN’T EVEN A DRAFT you’ll ignore this advice and you’ll make the mistake of Editing a little bit and then writing shortly thereafter. You won’t be able to help it.

That’s okay.  You need to make that mistake.  You’ll make it a lot.

But after you’ve made it a bunch of times, you’ll come to understand this fundamental thing about Editing.

Now the beautiful part of this onerous task is that when you finish THE SECOND DRAFT THAT ISN’T EVEN A DRAFT (EDITING), you’ll have a prescriptive list of fundamental things that have to address in the first draft of your Story.

You’ll have the equivalent of a building inspector’s punch list of fundamental structures that you have to fix in your Story Building.  It is not remotely about line-by-line sentence polishing. Editing is about seeing the macro and the micro of your Story structure so that you can shore up the weak spots, and spotlight the innovations.

So what are the beginning, middle and end of Editing? How do you complete THE SECOND DRAFT THAT ISN’T A DRAFT?

Well, I’ve spent the last six months or so at www.storygrid.com to explain what it is editors do.   And the website is the basis of my upcoming book The Story Grid: What Good Editors Know, which is just about to go to the printer.

It would be terrific if you bought a copy, but you don’t have to.  Everything you need to know about editing is free at www.storygrid.com. Really.

But to answer the above question simply:

The beginning of editing is creating a Story Grid Spreadsheet.

The middle of editing is creating a Foolscap Global Story Grid.

And the end of editing is putting together the Spreadsheet and the Foolscap Page into a complete Story Grid for your first draft.

Once you’ve finished Editing or THE SECOND DRAFT THAT ISN’T A DRAFT, you will have a clear understanding of what you’ll need to do in the drafts to come.  You will not fear these drafts.  Rather you will be re-energized to tackle the obvious problems in your first draft with vim and vigor.

You’ll have that confidence because you’ll know exactly what you’ll need to do to fix the problems and you’ll have a strategy to get that work done.

That is what THE SECOND DRAFT THAT IS NOT A DRAFT is all about.