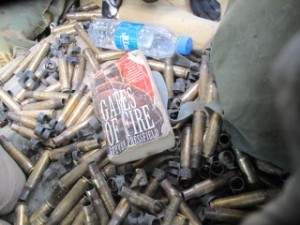 Here’s something I think is true.

It’s a riff on my 10,000-reader rule, which I think is the magic number of readers per title a publisher must reach before she can be satisfied that she’d done all that she could.  After exposing 10,000 interested people to a book, she’ll either concede defeat (for whatever reason the book just didn’t generate enough word of mouth to survive) or she’ll start reaping revenue from the title year after year.

That’s the riff? The only way a book can succeed commercially is if people actually read it?

I know that sounds obvious and so simple it’s not worthy of commentary, but it’s the single biggest thing that keeps great books from becoming perennial backlist bestsellers.

The book may have sold a healthy number in its first year, but it wasn’t read enough.  It sat on nightstands or on coffee tables and the spine was never sufficiently cracked.

Let’s take a step back:

Remember the difference between frontlist and backlist titles to a publisher?

Frontlist titles are the thing that the Big Five spend 99.9% of their efforts on.  These are the splashy novels or big celebrity tell-alls or narrative nonfictions or big idea books that get million dollar advances and coveted PSFR (Publisher to Sales Force to Retailer) marketing programs from the start.

A PSFR Publisher to Sales Force to Retailer publication works like this:

That’s really all there is to it.

In every publishing season, there is about 3-5 of these “Big” books for every publisher (9 to 15 per year per publisher, about 100 total across the big publishing industry) that get the majority of attention.  These are the frontlist darlings and the ones the publisher thinks will become immediate bestsellers.

These are the titles that are reviewed in The New York Times Book Review and whatever else is left of dedicated book reviewing in other newspapers across the country. Or on Goodreads etc.

And a few of them do “break out.”  They do become bestsellers and some of those even make a healthy profit, allowing the editor/publisher to breath a sigh of relief.  Chances are though that the editor and publisher are on to the next push for the next “Big” book by the time the last “Big” book actually publishes.

But then something interesting often happens. More often than not.

Once the book falls off the frontlist bestseller lists, it sinks like a stone.  It perhaps sells 50,000 copies in its first three months of on sale and then it fizzles completely.

Very few of the darlings actually move from frontlist to backlist bestsellerdom.

I think it’s because very few of those 50,000 copies sold in the first three months were actually read.  Seriously.  I think people bought them meaning to read them, but either dipped in and didn’t get hooked or just never got around to it.  And after the book sat untouched, it fell to the bottom of the pile…never to be heard or seen of again. Until the Church bazaar book donation drive where it sits forlorn on basement card tables amongst other bygone year bestsellers.

Remember though that backlist bestsellers are the To Kill a Mockingbird, How to Win Friends and Influence People and The War of Art kind of titles.  They sell strongly year after year after year…

How does a book become a backlist bestseller?

Here’s what I think…

They become bestsellers because people read them.  More than once. These books connect with people and they become, if not members of the family, go-to sources of inspiration and comfort.

And when we get inspired or comforted by something, we let our friends know about it.  Can’t help it.  It’s rough out there and when we find solace, we tell our compadres.

Here’s the thing about a publishing philosophy that embraces the 10,000 Reader Rule, though:  It ain’t sexy.  It ain’t gonna get your picture on the cover of The Styles Section of The New York Times.

A backlist/steady Eddie kind of publishing company is unheralded.  It’s the equivalent of a reliable plumbing or electrician’s business.  The work is solid and hard and modest, invisibly indispensable. It’s eminently rewarding but expect no third party validation for doing it.  If you do it well, few will have ever heard of your company. And as odd as it sounds, if you get calls from The New York Times to profile you…run for the hills!

Big Publishers want sales.  As many as possible.  As soon as possible.  I get it.  That’s good for today’s balance sheet.  And every once and a while, one of the “Big” books crosses over and becomes gigantic frontlist and backlist.  Nothing wrong with that and there is absolutely something wonderful about a book becoming as known and exciting as a big sports event or movie or song.  I’m all for that.

But it’s vitally important to remember that there is no way any book will live year in and year out unless it is read.

So for all of you writers out there, concentrate on the people you think would embrace your work.  Write for them, to them.  So that when your book makes it into their world, they’ll be intrigued.  That intrigue will lead to giving your story a chance.  And if your story delivers something true to them, they’ll keep it close and share it with others.

The trick isn’t to get people to buy your book.  It’s compelling them to actually read it.