The Editorial Macro and Micro

You’ve heard this story before. 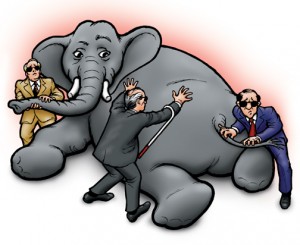 A group of concerned citizens from a small town in Eastern India travel far and wide to meet with Siddhartha Gautama, the supreme Capo di tutti capi Buddha of them all.

The Buddha graciously grants them an audience.

The spokesman for the group explains to the Buddha that in their town there is great dissension among the most learned among them about the nature of the soul.  They are wondering if he could enlighten them so as to settle the dispute.

The traveler goes on to say that some of his brethren say the souls of men are finite…that they die with the body…and others say that man’s soul is infinite…that upon death the core essence leaves the body and joins the everlasting eternal collective unconscious.

The Buddha reflects on the controversy and as is his custom tells the pilgrims a Story.

For fun, a Raja calls to his manservant one day and asks him to collect the three blind men from his kingdom.

The servant brings the men to the palace and the Raja leads each of the blind men one by one into his private courtyard.

There the Raja introduces each blind man to an elephant.

The Raja places the first blind man’s hand on the elephant’s tusk.

He leads the second blind man to one of the elephant’s legs.

The third he directs to end of the elephant’s tail.

He then brings the three men together into the royal banquet hall and serves them an elegant meal.

After they’ve supped, he asks each of them in order, to explain what best purpose the elephant could serve the kingdom.

The first blind man suggests that the elephant would serve as an excellent plough.

The second disagrees vehemently and confidently declares that the only purpose the elephant could serve would be as a pillar to support tradesmen tasked with building the Raja’s new palace.

The third is even more disagreeable and flatly states that the only use for an elephant is as a brush to clean the royal courtyards.

With this, the Buddha bids farewell to his guests.

The “The Blind Men and the Elephant” parable captures not just the existential dilemma of mankind (our incapacity to “see” the universe’s grand design and/or lack thereof) but also the central quandary of the Story editor.

The editor must see the global landscape as the Raja does, but also laser focus on the minutiae as the blind men do.

And then he must also be able to examine the Micro physiology of the Story beast like a blind man—evaluate the unique properties of the Story’s structure.  Just as all elephants have trunks, all Love Stories have a “proof of Love scene” and all Revelation Stories have a “truth will out” scene. The editor must feel for those critical scenes in the Story and evaluate their effectiveness.

Examining the Micro structure of the Story gives the editor the ability to explain to the writer exactly why his Love Story will not get readers’ blood pumping or why his Revelation Story has no solar plexus thumping payoff.

A consummate Story editor must also be able to explain the Macro structure to a writer…that their elephant only has three legs and that its trunk is where its right ear should be.

And then he must pinpoint the appropriate location on the animal that the writer can perform the surgery necessary to attach another limb and how to best remove and reattach the trunk to his Story beast’s head.

The Story Grid teaches both the Macro and Micro craft.

The Macro of The Story Grid methodology is The Foolscap Global Story Grid one page overview…what the Raja sees.  And The Story Grid Spreadsheet is the Micro that a blind man would feel if he moved from tip to tail.

What I love about The Story Grid’s final permutation, the big infographic that represents the architecture of an entire work, is that it gives the editor and writer the Macro and the Micro in one fell swoop.

We see the elephant and we get to feel the trunk too. 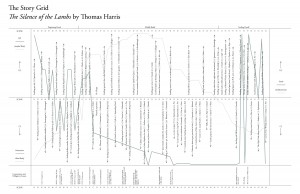 The Editorial Macro and Micro for The Silence of the Lambs

For fun, here is the final big Mongo Macro/Micro Story Grid for Thomas Harris’s masterpiece, The Silence of the Lambs.