An American Jew for Christmas

How do you sell your soul? 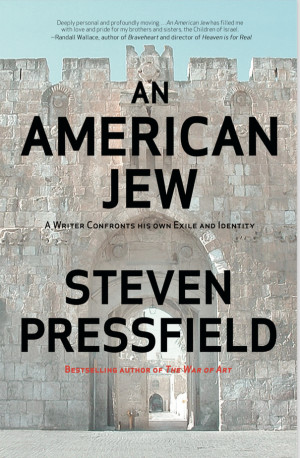 Isn’t this a strange question?

I mean we’ve been taught that Artists don’t sell their souls. They keep their inner self-actualization struggles to themselves and let their work speak for them.

Faust sold his soul and that didn’t turn out so well (at least until Goethe made that evergreen Story/Myth his own).

So an artist should avoid putting his/her innermost thoughts up for sale at all cost.  Or their blasphemous opening of their internal kimono will lead as Joe Strummer of The Clash so succinctly sang, “straight to Hell.”

Instead, it’s best to write around what you think and feel about your life’s work and why you’ve been compelled to do it.  Don’t explicitly express those thoughts and emotions. And God forbid, whatever you do, don’t be so arrogant as to put a retail cover price on them.

This dilemma–to report or not report the internal war–is the seasoned artist’s primary bugaboo.

And it’s the reason why, for the first time, Steve Pressfield is not the author of today’s Writing Wednesdays column.

When we first start out as “creatives,” all we want is to be chosen and embraced by a wide audience. We don’t worry so much about our artistic soul. Hell, we just want to get in the game. We just want Random House to pick us out of the soup and then see how many units our crazy-made-up-fictional-world-we-concocted-for-fun can move.

But as the years and projects go by, our work and the way we think about our work starts to shape shift. It starts to be less than about getting higher on The New York Times Bestseller List and more about “Gee…I wonder why I was compelled to burn five years of my life on that project instead of something else?”

It is from this place of “why” that Steve Pressfield wrote his latest book, An American Jew: A Writer Confronts His Own Exile and Identity.

What began as a “notes to myself” kind of side diary he used to talk himself off of the ledge while in medias res of the incredibly intimidating task of learning a completely new genre (journalism based narrative nonfiction) while writing The Lion’s Gate, turned into something far deeper than he’d imagined.

An American Jew is the story of a writer confronting eternal questions…Who am I? Where do I belong? Why am I compelled to do what I do?

Obviously, this stuff isn’t for everyone. No easy sell either.

You’ve got to be pretty high up on Maslow’s hierarchy of needs to understand the necessity of confronting these unanswerable questions in the first place. And even that small subset of writers/artists beginning to think about these issues won’t necessarily be running to a bookstore to read about how someone else muddled around this ephemeral terrain.

In Marketing-speak, the target audience for this book is a tiny niche (existentially inquisitive artists) of a small niche (writers and artists). A nonstarter project if there every was one. Definitely not something that can be relied upon financially.

And truth be told, Steve wasn’t really so keen about taking his raw stuff, remolding it, and then letting me edit it to shreds, sending it back to him for a almost complete re-write, and then going through his usual two or three rounds of polish…all so that he’d be confronted with trying to shill it to our little tribe of followers.  Hence my penning today’s column.

“Pard, I just don’t know who would care about this? Isn’t this too personal?”

Check out this video where he talks about the book in almost apologetic terms.

Obviously I disagree. I think this book is exactly why Black Irish Books exists.

An American Jew is a perfect example of what I call “specificity as universality.” The more personally and deeply you drill as a writer…the more reluctant you’ll be to share your terrors and uncertainties…the more likely your work will touch the most unlikely of audiences.

Not to put too fine a point on it, but Steve’s book isn’t really about being an American or a Jew.  You needn’t be either to be entertained (and profoundly moved) by it.  Just like you didn’t need to be a Spartan to enjoy Gates of Fire or a writer to get something out of The War of Art.

When explaining the power of specificity, I often talk about Eugene O’Neill and his absolute horror of his play Long Day’s Journey Into Night being published (let alone produced), not just within his lifetime, but for twenty-five years after his death! He wrote it in tears and blood and could not imagine anyone really “getting it,” beyond the five tragic members of his immediate family.

I think O’Neill probably felt about Long Day’s in much the same way that Steve thinks of An American Jew…too personal, not for everyone…too raw…too, for lack of a better word, “embarrassing.” But both of these guys were compelled to write these works anyway…even if, especially if, no one cares. I find that fascinating.

And I think you will too.

That’s all well and good, but how do we “sell this thing?” If the book is important enough to publish, it’s important that you sell it too.  Let’s not be so precious about our work that we can’t do a little song and dance for it.  But it’s got to be the right kind of dance or as Robert DeNiro said playing Jake LaMotta in Raging Bull,  “It defeats its own purpose.”

Steve, Callie, Jeff and I went back and forth on this and we decided the best way was not to “sell it.” Instead, we decided to put An American Jew in Black Irish context.

We all see this book as an indispensable addition to our little “writers library.”

So we’ve put together the Black Irish MegaBundle for Writers to keep it company. Our library includes the following:

The War of Art

And The FIRST 500 bundle buyers will get editions (including eBooks with the exception of The Lion’s Gate, and select Black Irish Produced Audios) of these seven books for just $35.00 (a $234.25 value).  Click here to take advantage.

Thereafter, we’ll offer the bundle for $50.00 until supplies run out.

And for our friends abroad where shipping charges are unconscionable, we’ll offer the Digital MegaBundle for Writers for six of these titles (we don’t control eBook rights to The Lion’s Gate) for the Crazy Eddie price of $15.00 (a $102.55 value). Click here.

Happy New Year! And thanks for being a part of our little Niche!