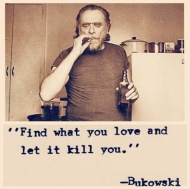 Too Cool for School

Over at the Story Grid Podcast, one of our most popular episodes concerns how writers approach Narrative Device.

What exactly is Narrative Device?

Narrative Device is the choice the writer makes about the qualities of the being that will “tell the Story.”

Should the writer write in the first person? I met a man from Istanbul who had a black moustache.

Or should the writer choose third person? When Temple Eliot stepped off the Orient Express, the first to attract her attention was a man with a black moustache.

Or even second person? You are not the kind of person who finds facial hair appealing, so why did the man with the black moustache seize your imagination?

Narrative Device is another way of qualifying the writer’s “voice.” And any writer worth her salt will tell you that once you crack the Narrative Device, the Story almost writes itself.

there’s a bluebird in my heart that
wants to get out
but I’m too tough for him,
I say, stay in there, I’m not going
to let anybody see
you.

there’s a bluebird in my heart that
wants to get out
but I pour whiskey on him and inhale
cigarette smoke
and the whores and the bartenders
and the grocery clerks
never know that
he’s
in there.

there’s a bluebird in my heart that
wants to get out
but I’m too tough for him,
I say,
stay down, do you want to mess
me up?
you want to screw up the
works?
you want to blow my book sales in
Europe?

there’s a bluebird in my heart that
wants to get out
but I’m too clever, I only let him out
at night sometimes
when everybody’s asleep.
I say, I know that you’re there,
so don’t be
sad.
then I put him back,
but he’s singing a little
in there, I haven’t quite let him
die
and we sleep together like
that
with our
secret pact
and it’s nice enough to
make a man
weep, but I don’t
weep, do
you?

I’d bet if Bukowski were around today and someone asked him to pick a piece of writing that best reflects his battle hardened true voice, it would be that poem.

The legend of Bukowski reeks of spilled beer, cigarillo smoke and the acrid sweat of obliterative rage. But in this poem, Bukowski the artist stripped away the BS and revealed the marshmallow human being underneath.

He did that by nailing the Narrative Device, in this case writing a confessional Story as the cynical performance artist known as the “writer Charles Bukowski.”

The storyteller of the poem is the authentic Bukowski, the guy who got up in darkness every morning before his shift at the post office to write. The other Bukowski, was a persona, one he no doubt enjoyed and hid behind to protect his bluebird from external third party assault, something that as a child he was all too familiar with.

Bukowski’s inner triumph (creating as existential necessity, not “look at me” exhibitionism) is the job we as writers and artists have signed up for. To shuck our “writerly” BS, examine our internal landscapes to such a degree that we recognize our multiple personae and find ways to give them the external stage, the page. Let them tell our stories for us. That’s why they’re in us.

To let those birds out even though their songs torment us.

Narrative Device is just the technical term for discovering how to get the hell out of the way and letting those bluebirds sing.