By Shawn Coyne | 18 Comments | What It Takes 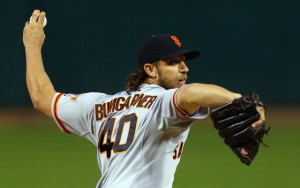 Madison Bumgarner, a man with impeccable IF

As many of you already know, over at The Story Grid Podcast, I’ve been serving as newbie fiction writer Tim Grahl’s developmental editor.

We’ve been at it for about nine months now and while Tim had to discard just about everything from his first draft, we’re making steady baby-step progress as he pivots into a new narrative direction.

It has been enormously gratifying to witness how the fundamental story principles that took me so long to understand are beginning to embed themselves into someone deliberately learning the craft.

But it’s a frustrating process too. And that’s no knock on Tim. It’s just the nature of mentoring creative work.

It’s frustrating in the same way it is when you try and teach someone a skill that abides an M + TEn = IF equation.

TE stands for trial and error

n stands for however many trials and errors an individualized system/organism needs to reach a cathartic success moment.  n could equal from one to infinity.

IF stands for “integrated feeling,” the reproducible biofeedback trigger of the aforementioned cathartic success moment when the body and mind aligns with the universe to produce a moment of purity.

When a golfer picks up his tee knowing her ball is dead center in the fairway or a basketball player knows the 3 pointer is nothing but net milliseconds after the ball leaves his fingertips, the IF is in play.  They experience an integrated feel of the moment, so they don’t have to sweat the result.  They “know” the result before it actually happens. That is called magic and every single one of us has felt that magic at one time or another in one place or another in our lives.

Being a developmental editor is an M + TEn = IF mentoring process…like teaching your son or daughter the best way to throw a baseball with accuracy and speed.

When I see kids throwing from a three quarter release or a from-the-shoelaces sidearm, it drives me nutso. Even if you forget about the damage it does to young arms (but why would you?), there are just so many ways that a sidearm merry-go-round throw can go wrong.

But an overhand throw perfectly (even imperfectly) executed, is as reliable as an old Maytag washer. No matter if it’s a long arm motion from the outfield, medium from shortstop or a short one from second base.

The reason why it’s difficult to get kids to throw overhand is that young boys and girls just don’t have a lot of trunk strength. And coordinating a full body motion presents a particular challenge to little beings still growing into themselves.

And then there is the deception of visual cues.

Something that on first glance seems to be all about the hand and arm (Come on dad, all I have to do is move my arm… let go of the ball and it flies in the air)…isn’t. Now changing an “obvious” perception into a deep understanding that throwing is all about using the big muscles of the body, not the little ligaments, tests one’s resolve.

Warnings like—if you rely on the little ligaments, stress them too much, they get irreparably damaged. And once they’re damaged, you end up walking away from the game. It will just hurt too much to play—don’t mean much to a kid who can fall off the garage roof, cry, recover and then do it all again five minutes later.

I talk until I’m hoarse, but you can’t really explain a proper overhand throw to someone who hasn’t successfully generated one yet. You just have to keep focused and keep catching their thrown balls until they do.

Now once they do throw a textbook overhand fastball, they can “feel” what you’re talking about and you’re a genius. There’s a Eureka! moment and dad isn’t as big of a grind as they thought he was.

My oldest has worked through the process and he’s now a bigger blowhard about overhand throwing than I am. Together we’re driving the youngest in our family crazy. My daughter is a natural athlete and her n was like 4. But that presents it’s own problems too…when things come too easily, you devalue them.

Again, until the kid executes the overhand himself…feels it…it will be torturous trying to explain it to him. Especially since he’s figured out a way to piece together a herky-jerky motion that for the most part “works.” That is, the ball gets near enough to the target to be playable. It’s not perfect, but it’s not crazy wild either…good enough.

The thing is that short-term “good enoughs” diabolically undermine long-term mastery. They’re Resistance’s single celled bacteria, infecting you without you even knowing it.

Which brings me to why there are so few developmental editors working today.

It’s because working with a newbie writer is like teaching a new baseball player how to throw his own brand of fastball.

Let’s back up a minute. What do I mean by a developmental editor?

These four kinds of editors make up 99.99 percent of the profession.

The variety the Big Five publishers care most about is, of course, the acquisition editor. The reason being that you can easily evaluate how effective an acquisition editor is by his financial track record. An editor who picks winners will rise in the hierarchy even if they can’t do any of the other stuff.

And sadly, no matter how talented an editor is as a line-by-line connoisseur or story tinkerer, if his personal Profit/Loss report is in the red…he just won’t make it in New York. We remember Maxwell Perkins because of the commercial success of his writers as much as we do his editorial genius. In fact if his crew of writers were just well reviewed Nobel prize winners without tens of millions of copies sold…Perkins would be as anonymous as every other editor you never heard of.

So what’s a developmental editor and why are they so rare a breed?

These are people who work with writers from idea to final draft. They provide story advice and guidance throughout the writing process.

To beat my metaphor to death, they teach fresh writing arms how to throw original overhand fastball narratives.

DEs explain what to do in a particular scene and then they watch the writer execute the scene (like watching a little leaguer throwing from second base to first base). DEs then evaluate the scene (throw) and advise the writer about how an adjustment could help him lock in to his own private natural narrative motion (his own voice).

DEs explain the mechanics and show the writer how the pros have done it before, but until the writer puts it together himself in his own unique way…all the DE can do is look at his practice, evaluate his result and tell him “that’s not it…try this instead…nope, still not it…try it this way…a little better…but not quite there yet…etc. etc. etc.”

The thing is that new writers, like little leaguers, often use herky-jerky motions to move their narrative balls.

Yes, the obvious cues (clichés) they’ve picked up by copying other writers without putting their own unique spin on a scene can oftentimes work. But while the scene may be “good enough,” the writer who hopes to string a slew of those things together to make an entire book work…is not preparing himself for the best chance of success.

It’s the equivalent of relying on ligaments instead of the big body muscles to create a reliable strike.

Can you throw junk for nine full innings and win? A teeny tiny group of people in the Majors can. Most, though, can’t. They need perfectly executed fastballs.

So the DE’s job is difficult.

The writer just wants to get the ball near the plate, good enough, and he’ll piece together something any which way to deliver something that works.

If the DE does not have the wherewithal and dedication to insist that the writer cut the shortcuts and develop his big muscles (his craft) and he goes along with the good enoughs, the writer’s writing ligaments will be permanently damaged. So damaged that the act of writing will begin to hurt so much that he’ll eventually just quit doing it.

They know the difference between their fastballs that snap right on the inside corner of the strike zone, knee level, and their off-speed junk that they use to knock a reader off balance. So much so that they’ll be the first one’s to tell you about the scenes they three quartered or side-armed just to mix it up or just to get the damn thing finished.

Keep in mind, that I’m not criticizing off-speed junk. You need to be able to throw that stuff too.

But the hard part is learning how to unleash one’s own private overhand fastball. That’s what the best developmental editors teach writers…how to discover and then unleash their best stuff.

And once a writer has that integrated feeling, she doesn’t need a DE anymore…