(Tune in to Writing Wednesdays this Friday and Monday for the continuation of the series “Using Your Real Life in Fiction” — and for more of The Knowledge‘s backstory.)

When we as writers use our real life in fiction, we tend to use real-life personalities too. One of the big ones in The Knowledge is my cat, Teaspoon. 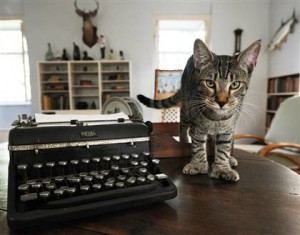 Not the real “Teaspoon,” but pretty darn close.

My real-life cat was named Mo. I changed the name for a reason, which I’ll get into below. But first let’s flash back [see Chapter 52 in Nobody Wants to Read Your Sh*t] to one of the seminal principles of story-telling:

Every character must represent something greater than him- or herself.

Every character must represent an aspect of the theme.

What, you may be asking, does this have to do with Steve’s cat?

The answer comes back to how a writer views material, whether that material is pure fiction, i.e. totally made-up, or borrowed from real life. In either case, the writer’s first question to him or herself is, “What does this character represent?”

Are you working on a story that has your ex-husband as a character? Your mother? Two buddies you served with in Afghanistan?

You must ask, as a writer, “What do these characters represent? What aspects of the story’s theme do they stand for?”

In The Godfather, every character represents a different aspect of the theme of family/immigrants-in-a-new-land/”criminal”-ethos-as-nobler-than-the-ethos-of-the-greater-society.

The characters outside the family do the same. Kay represents the counter-family in terms of Mayflower WASPiness; she represents what Michael and the Corleones can never become. The gangsters in the other Five Families represent a different counter-family—criminals whose code of honor is a few levels beneath that of the Corleones.

But back to my cat, Teaspoon.

I really did have a cat during the period [see Chapter 5] in which The Knowledge takes place. I really did find him on the street as a tiny kitten; he really did travel with me all around the country; he really was an outdoor cat; he really did pad out the rear window of my apartment and down a two-flight staircase to roam around our NY neighborhood every night all night.

And my real cat really did curl up next to my typewriter as I worked, with the typewriter carriage shuttling back and forth over his head.

He would stay in that spot for hours. He became my lucky charm. As long as Teaspoon was there in his spot, I could write like a bandit. One time in California he got sick and had to stay at the vet’s for four days. I was paralyzed. I couldn’t write a word till he got back.

The theme of The Knowledge is an aspiring writer must overcome his demons of Resistance, i.e., distraction, self-sabotage, and self-betrayal, before he can become a real artist.

Teaspoon represents an aspect of this theme.

He represents this struggling writer’s muse.

An animal, a creature of nature, stands for the unspoiled, instinctive connection to the Source.

I respect Teaspoon because he is his own man. I have no idea where he goes at night. He roams as far afield as Nicolette’s basement apartment, which is six city blocks away. I have no idea how he gets there. He navigates by cat radar …

He has been with me [forever] and has always been true blue. He’s the kind of cat who would lend you money, no questions asked, if he had it.

Remember our two principles regarding characters in fiction:

Every character must represent something greater than him or herself.

Every character must represent some aspect of the theme.

There’s another constellation of characters in The Knowledge—the gangsters Yehuda, Ponytail, and Ivanov.

They represent distraction. The self-sought-out “drama” that keeps our protagonist, Stretch, from doing his work as a writer.

Therefore, if GANGSTERS = DISTRACTION and TEASPOON = MUSE, what must happen in the story?

The gangsters have to kidnap Teaspoon.

(This was actually Shawn’s idea, after I showed him the first draft. Immediately he said, “You gotta have Yehuda kidnap Teaspoon. Teaspoon is Stretch’s muse. Stretch has gotta go all-out to recover his cat. It’s like The Big Lebowski, where the Dude is trying to get his carpet back.”)

A huge part of the story became Stretch trying to get Teaspoon back from the gangsters.

Does this sound crazy? Maybe. But it works.

It works because it’s on-theme.

It works because it’s the story-in-miniature.

The reader gets it, even if only on an unconscious level.

To continue this line of thinking, let’s throw in a third element.

The character of Nicolette in The Knowledge represents a different aspect of the theme. She is, and stands for, a realized artist. She is Stretch’s semi-girlfriend, a painter who has truly found her groove and is a bona fide working, professional artist. She is in touch with her muse and in control of her artistic power.

Nicolette represents what Stretch wishes he could become.

If TEASPOON = MUSE and NICOLETTE = REAL ARTIST, who winds up saving Teaspoon and giving him back to Stretch? [See page 261 in The Knowledge.]

This is the way a writer constructs a story. This is the architecture undergirding the various acts and sequences and scenes.

When you and I use our real lives as raw material for our fiction (and when we thereby recruit real people as characters), we must process these real people the same way a novelist processes purely fictional characters.

We ask ourselves, “What’s the theme? What’s our story about?”

Then: “What aspect of the theme does this character represent?”

I found my cat when he was a tiny kitten, at midnight on a street called Cheyne Walk in London … The kitten was so small I could cup him in one palm and fit him into the breast pocket of my jacket. In England they call this the “teaspoon pocket.” So he became Teaspoon. I slipped him in next to my heart and he curled up and went to sleep.

Key phrase: “next to my heart.”

That’s where an artist’s muse lives.

[Don’t forget, if questions occur to you about this stuff, write ’em in in the Comments section below. I’ll do my best to answer them.]