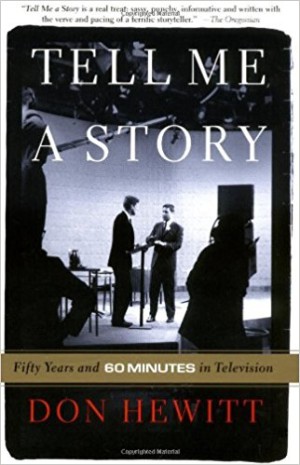 The late Don Hewitt was a master nonfiction story editor.

My next series of posts will concern the relationship between storytelling and nonfiction. In order to boil down my nonfiction editorial philosophy into a digestible 10,000 word-ish series for the www.sp.com crowd, I’ll be adapting voluminous material that I’ve previously released at www.storygrid.com

Bottom line is that you die-hard fans may discover material that I’ve written and published before. My intention is not to pass off old writing as original and new, rather to reuse sturdy prose that I stand by in my efforts to streamline my nonfiction editorial philosophy. So let’s get started.

The title of this post is an oxymoron right?

Nonfiction is supposed to be factual and “real,” while Stories are made up of flights of fancy, decidedly unreal. That’s what I was told in the classroom when I was just a wee boy and even later on in college.

It wasn’t until I was in my 30s, with years in book publishing’s trenches on my curriculum vitae, that I realized that those lessons were absolutely ridiculous.

Anyone who reads for a living soon learns that slogging through a purely factual work of nonfiction is an excruciatingly painful experience. The best cure for insomnia.

That’s because nonfiction without any contextual narrative is simply data.

Data is great and everything, but without someone analyzing it, judging it, and then explaining what she or he believes it means with a formulated and conclusive overarching controlling idea conveyed inside a story, it’s just a bunch of numbers or boringly objective description.

It’s important to note that I’ve worked on as many nonfiction titles in my career as I’ve worked on fiction…hundreds of books in all sorts of arenas.

Beyond the fact that I was interested in each and every title I acquired, I used nonfiction to counterbalance the bets I was placing on the fiction I edited.

You see book editors are like heads of hedge funds. Without the big money.

You spread your bets across a slew of categories in order to secure a stable return on investment for your employer…so that you earn your salary and benefits while the corporation gets a multiple return on its investment in you.

When you’re young and buying a lot of penny stocks, you learn the trade. The early days for young editors back in the day were about getting to be in charge of “list building programs.” These programs allowed the publisher’s young Turks to acquire and publish up and coming writers with little financial exposure for the company. These are the programs that grew writers like Michael Connelly, Janet Evanovich, Robert Crais, and Mary Higgins Clark etc. into blockbuster bestselling writers.

As you gain more and more experience as an editor though, your days spending small money cease. You then end up limited to buying just blue chip stocks (luring a big name writer away from a rival for a lot of guaranteed money) and big potential IPOs (big idea projects from agents written by first time writers that seem to have huge upside). Successfully transitioning from publishing 30 to 50 books a year (no editor does that anymore unless they’re working for an independent eBook outfit) to 8 to 12 “big books” required the attainment of some editorial craft. Not that anyone offered lessons in editing.  It was a self-taught, don’t let anyone else know your “system,” kind of craft.

So simply as a matter of survival, book editors (especially the senior, executive, and higher management ranking ones) become “generalists.”   That means that their interests are wide and their expertise adaptable.  They have a system that can fix a self-help book as well as a biography of Winston Churchill.

Knowing how to fix a nonfiction book as well as knowing how to massage a novel is a very marketable skill. And yes there are still at least one or two of those kinds of editors at each of the major publishing imprints. They’re the sanest people in the asylums. I know who they are because I grew up in the business with them or witnessed from afar when it was obvious they made something marginal work in a way no one expected.

A fiction editor who does not buy nonfiction today, though, is a rarity.

These last of the Mohicans are either at a relatively safe place in the career having resigned themselves to being satisfied with a solid if not extravagant salary and a nice office (nothing wrong with that if you get to work with writers you love on books you adore) or they are one of the up and coming younglings who just doesn’t know what’s good for them. Yet.

But, there are plenty of Nonfiction-Only Editors.

Because fiction is impossible to predict…why take on the agita of killing yourself to bring a novel to its finest possible expression without having any idea if anyone will read it?  It’s just not rational.

Nonfiction, though, is much easier to assess in terms of its potential market.  We can find the people who love fly fishing.

There are a gazillion diet books published every year…and it’s guaranteed that one of them will become the next new thing that sells a million copies and gives birth to a franchise. Many editors acquire their own diet book and throw it into the annual publishing lottery.  As long as they don’t go crazy overpaying for it and edit it with some flair, their book will have as good a chance as anyone else’s to make #1 at Amazon.com on January 1. And certainly they won’t get blamed if it doesn’t work.

Okay so that’s the global science of being a “generalist” editor. You hedge your list with fiction and nonfiction to the best of your ability.

What about the art?

What about some good old fashioned, earnest, doing it for the love of books motivation?

What about that “system” editors use to pick their projects and edit them to the best possible effect?

That’s what’s next. How using storytelling techniques can make nonfiction as compelling as a Stephen King novel…