I love the movie Shane.

In my opinion it’s the greatest Western ever, surpassing even The Searchers and The Wild Bunch and High Noon, not to mention Butch Cassidy and the Sundance Kid and Unforgiven.

I’m aware that many reading this post have not seen Shane, or may not have even heard of it. 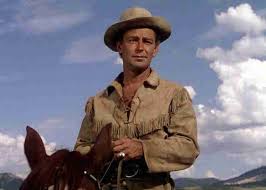 Alan Ladd as the title character in “Shane”

Nonetheless, if you’ll forgive me, let me make a pitch here and now for Shane, the classic Western starring Alan Ladd, Van Heflin, Jean Arthur, Brandon deWilde and Jack Palance, directed by George Stevens and written by A.B. Guthrie, Jr. and Jack Sher from Sher’s 1949 novel (that he wrote as Jack Schaefer.)

I took a class in Greek tragedy in college. I got a D both semesters.

That was the downside.

The upside was I was exposed to the following term/concept:

The coincidence of the anagnorisis and the peripateia.

(I’ve been waiting five decades to use that in a sentence.)

the point in the plot especially of a tragedy at which the protagonist recognizes his or her or some other character’s true identity or      discovers the true nature of his or her own situation.

Peripateia is a little simpler to define.

In tragedy, reversal of fortune almost always means the plunge from the penthouse to the outhouse. The hero’s great fall from grace. Catastrophe, in the true Greek-derived sense of the word (kata = down, strophe = stroke or movement).

“Coincidence” in the phrase above doesn’t mean a random coming-together, as we might conventionally define it. It means simply when two things happen at the same time, i.e. when they coincide.

The coincidence of the anagnorisis and the peripateia means simply that the moment when the hero realizes who he or she really is … is the moment when his or her world falls apart.

The defining characteristic of a tragedy (as opposed to a comedy or a conventional narrative) is the coincidence of the anagnorisis and the peripateia.

Oedipus, in the moment he is confronted with his true identity (“OMG, I’m the one in the prophecy who was fated to kill his father and marry his mother … and I did so!”), falls from the blessed king of Thebes to the human being most hated by the gods—and the cause of his country’s cataclysmic suffering.

No wonder he plunges spikes into both his eyes.

Shane is a tragedy too.

How do we know?

Because Shane, like Sophocles’ Oedipus Rex, is defined by the coincidence of the anagnorisis and the peripateia.

Shane the gunfighter enters the valley believing/hoping that he can change his life.

His aim is to hang up his six-shooter and become a normal human being, a regular guy.

Shane goes to work as a ranch hand for brave, good-hearted sodbuster Joe Starrett (Van Heflin)—willingly taking on a role far beneath his station. He is befriended by (and secretly falls in love with) Starrett’s wife Marion (Jean Arthur.) This bond reinforces Shane’s hope that he can achieve a conventional life. Perhaps there is another woman like Marion, whom he might meet someday and with whom he could settle down, raise a family, etc.

But trouble comes to the valley in the form of black-hatted gunslinger Wilson (Jack Palance), who has been brought in by the cattleman villain Rufe Ryker (Emile Meyer) to buffalo the sodbusters and drive them from their farming claims. 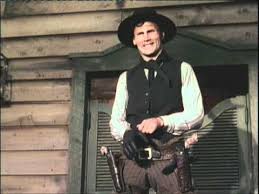 Jack Palance as the gunfighter Wilson in “Shane”

No one in the valley, not even valiant Joe Starrett, is capable of standing up to the threat of Wilson.

No one but Shane.

Out of love for Marion (and her son little Joe [Brandon deWilde]), Shane straps on his .44 and rides into town to face Wilson.

With Joey watching from the shadows, Shane outdraws Wilson and kills him—and Ryker and Ryker’s co-villain brother too, when they try to gun him down from hiding.

Shane does all this fair and square.

In the audience we dare to believe that a happy ending is moments away.

Shane has saved the day!

The town will honor his courage!

He can find a place of his own and make a life here in the valley, as he had hoped!

Instead Shane mounts up to ride on.

But, Shane, we want you! Pa’s got things to do.

And Mother wants you, I know she does!

This moment is his anagnorisis.

In the shootout with Wilson, Shane realizes his true identity.

He is a gunfighter.

Nothing and no one can alter that fact.

A man has to be what he is, Joey. He can’t break the

mold. I tried, and it didn’t work for me.

The moment is Shane’s peripateia as well. His reversal of fortune.

Joey, there’s no living with a killing. There’s no

going back from it. Right or wrong, it’s a brand. A brand that sticks.

No course remains for Shane but to ride on.

This moment, to me, is one of the greatest in American cinema. What might have been an ordinary Western is elevated in this climax to the sphere of tragedy, which is to say a work of art expressing a far deeper understanding of life than Hollywood movies are noted for.

That’s why I put Shane above even the greatest of the other great American Westerns.