In the classic Western Shane there’s a character named Chris Calloway (played by Ben Johnson, who later won an Oscar for his role as “Sam the Lion” in The Last Picture Show.) 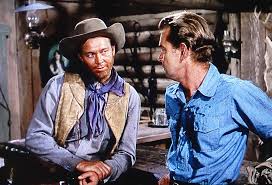 Chris Calloway is the original bully in Shane. He’s the first of the Bad Cattlemen to humiliate Shane (Alan Ladd) in the bar room at Grafton’s, calling him “Sody Pop” and slinging a shot of whisky into his face. Chris brawls with Shane and in general shows himself to be a world-class sonofabitch.

But later in the film when Chris learns that his boss, Rufe Ryker, plans to dry-gulch Shane’s friend Joe Starrett and kill him, he has a change of heart. He appears at midnight outside Shane’s door. Shane draws his gun, suspecting treachery. But Chris has come to make amends. “Hold on, Shane. I got something to tell you.”

Starrett’s up against a stacked deck.

Why are you telling me?

I reckon something’s come over me.

Shane realizes that Chris has truly had a change of heart. He lowers his gun. He thanks Chris. The former enemies not only shake hands but seem to actually form a bond of goodwill that might carry forward into the future.

And, with a nod of farewell, Chris rides off into the night.

You will never see a villain play a scene like this—that is, one in which he, the villain, faces up to the error of his ways and actually changes.

If he does, like Chris Calloway above, he ceases to be a villain. He becomes the hero of a subplot of the story, in this case the Shane-Calloway Subplot.

Why won’t the villain ever apologize?

Because is his view, he is 100% right. His beliefs are sound. His actions are honorable. To apologize would be to betray his most deeply held convictions.

The filmmakers of Vice (writer and director Adam McKay) put the following speech into the mouth of VP Dick Cheney (Christian Bale), who, in the movie’s eyes, is most decidedly the villain.

There are monsters in this world. We saw three thousand innocent people burned to death by those monsters. And yet you object when I refuse to kiss those monsters on the cheek and say “Pretty please.” You answer me this: what terrorist attack would you have let go forward so you wouldn’t seem like a mean and nasty fella? I will not apologize for keeping your family safe and I will not apologize for doing what needed to be done so that your loved ones can sleep peaceably at night. It has been my honor to be your servant. You chose me. I did what you asked.

The villain is unrepentant to the end because, in his eyes, he has nothing to repent for.