This book is my story, about what it meant to me, a totally secular American Jew who couldn’t spell “Shalom” and whose family celebrated Christmas, to travel to the Holy Land late in life and experience total immersion into a culture and a story that were my birthright but that I had, until then, never known.

From Shawn Coyne’s intro to The Lion’s Gate:

Steven Pressfield grew up assuming he was like every other kid in his red-white-and-blue, Sunday-School attending, Christmas-tree decorating suburb. Then at age thirteen he found out he was in fact not a member of that tribe, but of a very different one.

Five decades later, in November 2011, Pressfield boarded an El Al jet bound for Israel. At long last, he’d committed to researching and writing The Lion’s Gate, a book that would finally wrestle with the riddle of his own identity. What he learned as an artist and a man in the three years it took to complete the work is the subject of An American Jew, an on-the-front-lines account of the creative process…in all its wonderfully confounding forms. 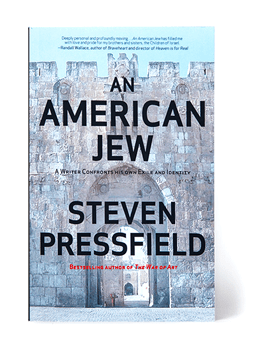 Available in paperback, and e-book from the Black Irish Books store.