The Long Range Desert Group was a real British commando unit of World War II. The instant I heard the name I fell in love with it.

A jeep of the Long Range Desert Group. The cylinder above the front bumper is a overflow condenser to keep the radiator from overheating.

The LRDG fought against Rommel and the Afrika Korps in the North Africa campaign of 1940-1943. They drove unarmored Chevrolet trucks, in which they carried everything they needed—petrol, ammo, food, fuel, spare parts—to strike hundreds of miles in the rear of the German forces, crossing deserts and “sand seas” that not even the native tribesmen dared venture into.

Killing Rommel is the story of one fictional mission (though others like it took place in real life), an attempt to infiltrate the Afrika Korps in the field and eliminate its invincible general.

Books have a way of becoming more, and different, than you think they will when you start to write them. Killing Rommel became more about its narrator, a fictional British lieutenant named Chapman, than about the raid itself. Chapman’s story was about the kind of fighter we don’t have any more—like Capt. Miller (Tom Hanks) in Saving Private Ryan– the citizen-soldier who takes up arms reluctantly and wishes only for the day when he can lay them down in peace but who proves, under fire, to be the equal and even the superior of troops and officers who have trained their whole lives for war. 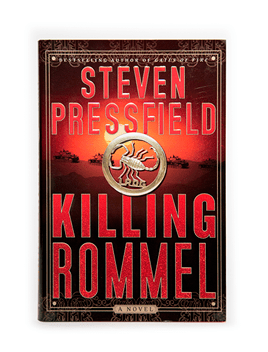