This book came immediately after The Virtues of War. There’s a chapter in Virtues titled Badlands. It’s about Alexander’s campaign in the Afghan kingdoms, 330-327 BCE.

As I was writing it, I thought, This is a book all by itself. I have to come back to this and write another volume just on this subject.

Why did I think that? Because Alexander’s war in the region that would become Afghanistan (it was called Bactria, Areia, Arachosia, Drangiana, Gedrosia and Sogdiana in his day) was a dead-ringer for our American war in the same places 2300 years later.

Not much has changed in 2300 years in Afghanistan. Photo courtesy Jim Gant.

A modern Western army found itself engaged with a primitive, fiercely-resisting tribal foe and, despite all its technical and logistical advantages, could not achieve victory. Here is Alexander addressing his troops in Afghanistan, from Quintus Curtius’ History of Alexander:

It is by your arms alone that they [the Afghan tribesmen] are restrained, not by their dispositions, and those who fear us when we are present, in our absence will be enemies. We are dealing with savage beasts, which lapse of time only can tame, when they are caught and caged, because their own nature cannot tame them … Accordingly we must either give up what we have taken, or we must seize what we do not yet hold.

Another parallel between Alexander’s campaign in Afghanistan and our own American sequel that was particularly fascinating to me was this: Alexander was pre-Christian, and his enemies were pre-Islamic.

Conventional wisdom during the time I was working on The Afghan Campaign was that the U.S. and its allies were up against “Islamism” or “Islamic extremism” in Afghanistan. To me, the facts of Alexander’s campaign proved this false.

Our troops were up against tribalism in its purest form, just like Alexander. And tribalism, it turns out, is a helluva fighting concept and produces warriors whose own primitiveness is their greatest strength.

“You may defeat us,” a council of tribal chieftains told Alexander in 329 BCE, “but you will never defeat our poverty.” 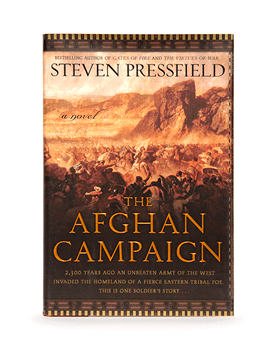