The Legend of Bagger Vance

I used to read the Bhagavad-Gita on airplanes. I figured if the plane was going to crash, I wanted to be reading something spiritual as we were going down. The Gita has been called “the Hindu Bible.” It tells the story of the great warrior Arjuna, who receives spiritual instruction from his charioteer, who happens to be Krishna, i.e. God in human form.

Will Smith and Matt Damon in the 2000 film adaptation, directed by Robet Redford, screenplay by Jeremy Leven.

One day I had this idea:

Why don’t I rip off the structure of the Gita and do a modern version, only instead of a troubled warrior I’ll make it a troubled golf champion, and instead of him receiving spiritual counsel from his charioteer, he’ll get it from his caddie. 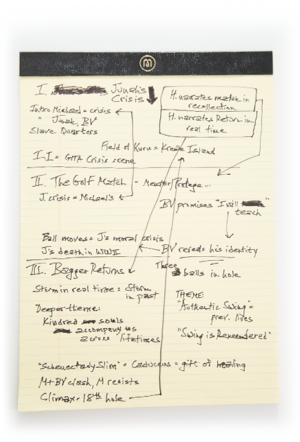 When I thought about this more seriously, I said to myself, Steve, this is the dumbest idea I’ve ever heard. No one is going to be interested in this except you.

I was making my living as a screenwriter at the time. I went to my agent and told him I wanted to write this idea as a book. He basically fired me on the spot. I couldn’t blame him. He had worked hard to get my career to a place where I was about to start making real money. Now I was taking six months or a year off (an eternity in the movie biz) to write some crazy book that no one’s gonna publish and even if they did, who in their right mind is gonna read it? But the idea had seized me. I had to do it.

The ironic thing is this loony idea became the first real commercial success I’d ever had—and it even got made into movie. For which my agent did NOT get a commission. 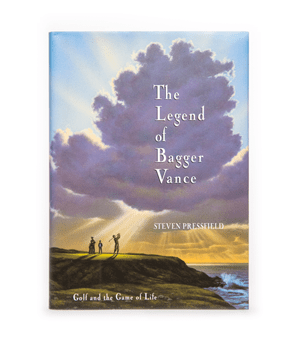 The Legend of Bagger Vance

Available in hardcover, paperback, audio and ebook from Amazon, B&N, indiebound and in a leather-bound special-edition from the Black Irish Books store.