I am a Jew. One day in 2010 it occurred to me that I had written war sagas about the ancient Spartans, the Athenians, the Macedonians, the British, even the Amazons … but I had never written anything about the feats of arms of my own people.

The Lion’s Gate was dedicated to Captain Lou Lenart, USMC and Israel Air Force. Here he is on Okinawa with his F4U Corsair fighter.

The Six Day War of 1967 was one of the greatest underdog victories in the history of warfare, and it was won by a people who had, less than thirty years earlier, almost been wiped off the earth in the death camps of the Third Reich.

Israeli Defense Minister Moshe Dayan decreed that all IDF combat officers (including himself) undergo paratroop training, whether they served in airborne units or not.

The Lion’s Gate is a gate in the fortified walls of the Old City of Jerusalem. It was through this gate that Israeli paratroopers entered the Old City, which at the time was in the hands of the Jordanians, and took possession, for the first time in nearly two thousand years, of the holiest site of the Jewish people—the Western Wall of the ancient temple of Solomon.

I traveled to Israel and found those paratroopers. (Thanks to my mentor and guide, Lieutenant Colonel Danny Grossman.) I found the first Recon unit to reach the Suez Canal. I found the fighter pilots who let the pre-emptive strike that wiped out the Egyptian Air Force in three hours on 5 June 1967.

These men and women told me their stories. The Lion’s Gate is their individual and collective saga, and the story of the Jewish people’s true return from exile after nearly two millennia scattered in diaspora around the world. 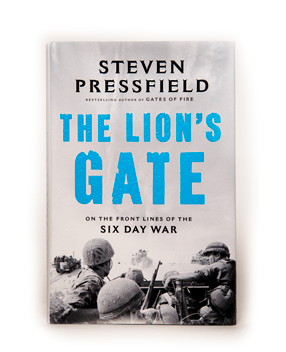 This book is available in Hardcover, Paperback, eBook, and Audiobook format from Amazon.com.