The Warrior Ethos started as an experiment that I and my publishing partner, Shawn Coyne, initiated in 2012. We printed 18,000 copies and gave them all away to U.S. troops (primarily Marines and Special Forces) in Iraq, Afghanistan, and the States. It was quite a logistical challenge, and we got a lot of help from friends on active duty. We were doing things like boxing up 500 books and sending them to a single battalion.

MILITARY EDITION NOT FOR SALE

Why did we want to give these books away? Mainly because I knew, from emails and letters from soldiers who had read my other books like Gates of Fire, that many of our guys and gals serving in harm’s way were dealing with a particularly pernicious form of emotional stress. The “gray areas” of the kinds of wars American servicemen and women were fighting had left many of them feeling like they’d lost touch with the ideals that had impelled them to sign up to serve in the first place. The Warrior Ethos was my way of trying to help them reconnect.

The Warrior Ethos is really a mini-book. The original version was only 90 pages. The book’s content is drawn almost exclusively from the ancient world, from Herodotus and Arrian, Plutarch, Vegetius, Xenophon, Thucydides, etc. There are anecdotes about the Spartans, the Romans, the Macedonians, with a few thrown in from the modern British and Israelis and even the Afrika Korps under Rommel. Here’s one story about Alexander the Great, taken from Plutarch, to give you the flavor of the book:

Once, Alexander was leading his army through a waterless desert. The column was strung out for miles, with men and horses suffering terribly from thirst. Suddenly, a detachment of scouts came galloping back to the king. They had found a small spring and managed to fill a helmet with water. They rushed to Alexander and presented this to him. The army held in place, watching. Every man’s eye was fixed upon his commander. Alexander thanked the scouts for bringing him this gift, then, without touching a drop, he lifted the helmet and poured the precious liquid into the sand. At once, a great cheer ascended, rolling from one end of the column to the other. A man was heard to say, “With a king like this to lead us, no force on earth can stand against us.” 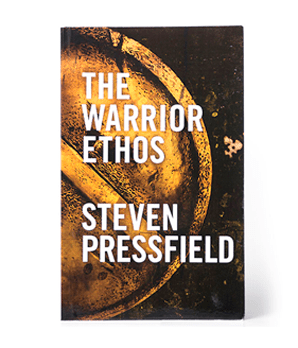 Available in paperback, audio and e-book from the Black Irish Books store.