I read Tim O’Brien’s book The Things They Carried right after it was published, and it blew me away. It is powerful-capturing the emotions, internal conflicts, and bravery of not just the Vietnam generation, but today’s soldiers and Marines, too. I’ve recommended it to many people since its release, and the responses I’ve received from those who have read it have always been moved and moving. It is an honor and privilege to do a Q&A with Tim, on the 20th anniversary of the publishing of The Things They Carried.

The Things They Carried received France’s Prix du Meilleur Livre Etranger and was a finalist for both the Pulitzer Prize and the National Book Critics Circle Award. In 1987, O’Brien received the National Magazine Award for the short story, “The Things They Carried,” and in 1999 it was selected for inclusion in The Best American Short Stories of the Century edited by John Updike. 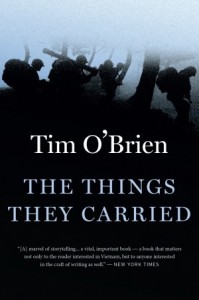 Tim is also the author of Going After Cacciato, which received the National Book Award in fiction; In the Lake of the Woods, which received the James Fennimore Cooper Prize from the Society of American Historians and was named best novel of 1994 by Time magazine; If I Die in a Combat Zone; Northern Lights; The Nuclear Age; Tomcat in Love; and July, July. His short fiction has appeared in The New Yorker, Esquire, Harper’s, The Atlantic, Playboy, and Ploughshares, and in several editions of The Best American Short Stories and The O. Henry Prize Stories. O’Brien is the recipient of literary awards from the American Academy of Arts and Letters, the Guggenheim Foundation, and the National Endowment for the Arts. He has been elected to both the Society of American Historians and the American Academy of Arts and Sciences. O’Brien currently holds the University Endowed Chair in Creative Writing at Texas State University. He lives with his wife and children in Austin, Texas.

T.O.: Ideas seem to come (and go) as if by their own volition. A tantalizing story possibility will sometimes pop to mind, either out of memory or imagination, and I’ll begin writing as a means of exploring the idea – its mysteries, its meanings, its facets, its moral import. The process of exploring and extending an “idea” through storytelling is for me wholly solitary. The process is collaborative only in the sense that the idea and I seem to work together on some occasions and at utter cross purposes on other occasions. I’m mostly a poor and pitiful supplicant, begging the story to reveal itself more fully. This process is sometimes fun, more often grueling, since I’m at the mercy of a story with its own secret purposes, ambitions, and desires. S.P.: Do you experience Resistance (meaning self-sabotage, procrastination, self-doubt, etc.?) In what form does Resistance present itself?

T.O.: I work every day on a very rigorous schedule. I do not procrastinate. Sometimes the work goes well, in which case I might end up with a paragraph or two of decent prose; other times the work goes badly, in which case I end up with a foul temper. But the habits of regularity and discipline are necessary, at least for me. The resistances I encounter come in many forms and sizes – a truculent phrase, a noun that will not disclose itself, a character who refuses to utter anything but cliches, a turn of event that is neither interesting nor surprising, a story that will not take a single faltering stride out of the starting gate. And so on. And so on. A completed novel, in my experience, can be viewed as an unbroken chain of resistances overcome or evaded.

S.P.: How do you overcome Resistance? Do you have a specific technique or metaphor that you employ to fortify, encourage or inspire yourself?

T.O.: As Joseph Conrad wrote, or said, somewhere: “. . . the sitting down is all.” I take that to mean – even if Conrad didn’t – that creative resistance can only be overcome, or artfully evaded, by the repetitive act of making oneself present. A writer must be there – at work – and not at a bowling alley.

S.P.: Once you have an idea, what’s your process for taking it to a finished form? How do you decide whether an idea is worth pursuing? Is there a series of steps that take you from “germ” to “finished product?”

T.O.: Sad to say, but I have no conscious process by which I advance an idea toward its finished form. From the instant I embark on a story or a novel, I’m in search of some approximation of a “finished form.” It’s a quest, not a process. I may find an aspect here, another aspect there, but there is no method to it beyond trusting in my own story. To trust in story is to trust in something beyond the intellect, beyond “process,” and beyond the sort of planning that an architect or an engineer or a plumber might do. I go to work each day trusting that my characters will utter interesting bits of dialogue, or that they will behave in interesting ways, or that might come up with interesting physical or linguistic replies to the moral paradoxes of being human.

S.P.: What do you do when you hit plateaus? How do you keep advancing? Is there one example of plateauing that you can share-and how you grew through it?

T.O.: When I hit plateaus, I head for the mountains. By that, I mean (or think I mean) that I do all I can to point a story or a novel toward its central human drama, toward its essential human mystery. Often, I’ve found that “plateaus” are the product of ill focus-an individual tree is in sharp relief, but the forest is blurry.

S.P.: Tim, much of what you wrote in The Things They Carried was based pretty closely (I assume) on actual events. Yet, being a fiction writer myself, I know that too intense an attachment to things-as-they-actually-happened or people-as-they-actually-are-or-were can work against the success of a story. How you do you handle the fact/fiction conundrum? Do ethical issues enter the equation, e.g. fidelity to an actual friend, in the sense of being reluctant to fictionalize anything he did … or simple fidelity to the truth of actual events? In your writing philosophy, what is the proper relation of fact to fiction?

T.O.: Since my work is very conspicuously labeled “fiction,” I don’t fret about issues of factuality. I would feel quite free, for instance, to write a story in which Germany wins World War Two, or in which Richard Cheney is an angel of the Lord. My fidelity is to the story. To the story alone. As a fiction writer, I’m interested not only in what “is,” or in what “was,” but also in what might have been or what almost was or what might still be or what should have been.

S.P.: I’ve been recommending The Things They Carries for years. If you have time, go check out Tim when he visits one of the following locations. Read the book.

Online
“Selected Shorts”
Will rebroadcast the reading of The Things They Carried on public radio stations nationwide between March 18th – 24th.