What the Dog Saw: Pitching and Receiving 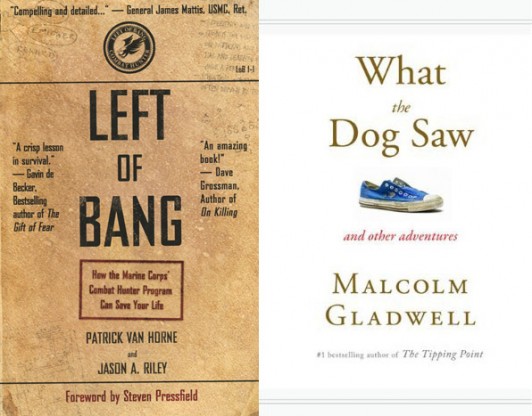 Personal Value: LEFT OF BANG and WHAT THE DOG SAW

I’ve been on the pitching and receiving end of books and films, as a publicist sharing information and as an editor and/or writer receiving and deciding what to do with that information.

Personal value is the common thread. As both a publicist and an editor/writer, you have to find the elements of value. What is of interest on the surface and what is of interest if you dive deeper—and how can they be pulled out?

A good example of this process resides in the following from Malcolm Gladwell, on how he finds a story:

You don’t start at the top if you want to find the story. You start in the middle, because it’s the people in the middle who do the actual work in the world.

If a book is a corporation/organization/you name it, what represents the “people in the middle” who drive the book? Find that and you’ll find the personal value that appeals to readers, editors/writers, and so on.

The mid-level employees are the threads that drive the book. They might not be worthy of a book of their own, but in sync, they bring the book together, like the employees of a corporation. (Think ethical, not sweat-shop…)

For example, Black Irish Books’ new title, Left of Bang: How the Marine Corps’ Combat Hunter Program Can Save Your Life, has a military vibe on the surface. With “Marine” and “Mattis” on the front cover, it’s hard to miss. The military and first-responder audience will “get” it right away, but we want the book to go beyond the military audience. How to do that?

As a publicist, I’m going to start asking myself questions.

First: I’m an Army Brat and understand how military-based lessons apply to a wide variety of civilian sectors, but I also know that I’ve run into people who don’t want to learn from the military. How to share these lessons with them?

Second: How would I use this book myself? The cover says the material has the potential to save my life. Who else would I want to have this information? My kids? Definitely. But can it be broken down for them? Their teachers? Of course! Bus drivers, baseball and soccer coaches, too? Yes. Yes. Yes.

Third: I’d identify different sections within the book, as well as the individuals I think would be interested in them. For example, page 161 shared this story:

On Friday, January 3rd, 2014, 22-year-old Roxanna Ramirez was working in the loss prevention department at a Target store in the San Francisco Bay area when she noticed a man who stood out. Afterwards she said, “Something just didn’t seem right. He was acting weird, as if he was up to something.” Even though the man didn’t steal anything, his behavior piqued her interest and she intuitively recognized him as an anomaly. Using the store’s video surveillance system, she tracked the man out to his car, where he began shaking the steering wheel. While there was nothing she could do or needed to do at that moment, she wrote down the man’s license plate number. A few hours later she learned about an Amber Alert for a seven-year-old girl and thought that the make and model of the abductor’s car was similar to the man she followed through Target. She called in a tip. That tip led to the arrest of David Allen Douglas and the safe recovery of a missing girl who was sitting in the back of his car. Ms. Ramirez’s awareness helped save a girl’s life. Because she had been operating in Condition Yellow and was actively searching for people who stood out from the baseline, she stopped a child abductor.

It isn’t enough to tell media outlets that this book will save their audience’s life.

However, by providing them an example of how someone used it, which ties into headline news, an example they can understand — something with which they can identify — is shared.

Now, if I was an editor or writer and someone was pitching it to me, I’d expect the publicist to know my interests. From my What It Takes columns alone, a publicist could tell that topics on which I write include the publishing industry, innovative sharing, sports and kids (to name a few things). How to pitch?

The publicist might start with kids and how so many of them lack situational awareness. They have their noses stuck within their iTouches/Phones/Pads/etc. instead of being aware of what’s going on around them. After all, we’ve all seen or heard of someone who has fallen or crashed or had something happen because they were paying more attention to their devices than to their surroundings. My own sister was walking with her head down, checking her e-mail, when someone ran from behind, grabbed her phone, and took off running. Turns out, people around her noticed the guy casing her, but she didn’t notice herself.

After bringing in the example of noses-in-devices kids, the publicist might then pull from the authors. How does their work apply to these kids? According to the Left of Bang authors, “Criminals are looking for soft targets or people who don’t have any situational awareness because in those cases the criminal can easily approach without being detected until it is too late.” With kids (and adults), teaching them situational awareness won’t ensure their safety, but it minimizes their chances of becoming victims.

Another point from the publicist would target the crossover,  that though this book is rooted in the military, it is for civilians, too:

The challenge that parents face trying to protect their children at the mall or at school from a criminal who looks and is dressed like everyone else is no different than the types of threats that Marines faced overseas trying to find an insurgent who blended in with all of the other people. While the incentive is there to become aware of your surroundings, if you don’t know what to look for, you’ll never find it. Having an undefined or unclear understanding of what you should be looking for, you are going to miss the pre-event indicators that are present until it is too late. By looking at the behaviors that we talk about in Left of Bang and learning how to identify people who are displaying the four primary cluster of behavior: dominance, submissiveness, discomfort and comfort, you can quickly focus on the person who requires more attention as they approach the school, the playground, the mall, the church, wherever. You learn to recognize them in any situation and how to put it into the context of the surroundings to know when they are important.

The publicist might close with the point that this book isn’t about fear, but about safety. Many of us grew up practicing fire and tornado drills in schools, and being told not to talk to strangers. Left of Bang extends those early lessons, ensuring that we know where to meet if there is a fire and instinctively duck and cover if there’s a tornado, and know in our gut the difference between danger and friend.

Going back to Malcolm Gladwell, in his story about Cesar Millan (a.k.a. the Dog Whisperer), he wrote:

After I got halfway through my reporting, I realized there was an even better question: When Milan performs his magic, what goes on in the dog’s head? That’s what we really want to know – what the dog saw.

So, the story is about Millan, whose heightened situational awareness of dogs could be compared to the Left of Bang authors’ heightened situational awareness of people, but it is also about the dogs, what they’ve seen, and what goes on in their heads when they see it. One story, different angles to discuss. Now, take that beyond an article and apply it to a book or album or whatever else you want to share.

It goes back to what I wrote two weeks ago, in “Focus on the Person, Not the Product.” Pull out the stories within the book, rather than pitching the book. Show others how those stories apply to them. If you don’t, you’re just pitching a product, standing in line, hoping to gain someone’s attention. Give them something they can relate to and you’ll give them a reason to buy into what you’re sharing.