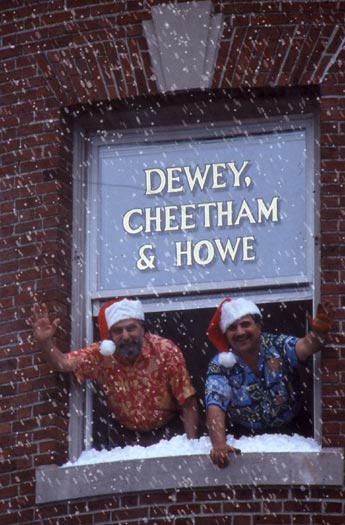 I knew little about cars—yet I tuned into NPR’s “Car Talk” and then stuck around for years, clinging to “Click and Clack’s” words.

Tom and Ray Magliozzi (a.k.a. Click and Clack the Tappet brothers) were a mainstay in my life, introduced by my father, who was a fan of their humor, accents, alma mater, and car knowledge.

I tuned in the first time to listen to what Dad was raving about. I stayed for every reason other than for the talk of cars.

Theirs was the ultimate crossover show—a program that attracted the mechanically inclined, as well as the mechanically illiterate. The show had “car” in the title, yet the audience colored far outside that one-category border.

We’ve talked about the crossover audience on this blog in the past, those individuals who don’t seem like your prime audience, but are indeed just that. How to attract them?

Laughter is one option.

Doug Berman, Car Talk’s producer, recalled Tom’s laughter, up there with great comics who laugh at their own jokes:

It was almost a force, almost separate from him . . . It was always lurking, trying to come out. And he would see something funny coming a few sentences away, and he would start to laugh while he was talking, and he’d kind of be laughing and it would almost overtake him like a wave.

Then there’s passion—which isn’t an option, but a requirement.

As told in a recent “All Things Considered” segment:

After getting out of college, Tom Magliozzi went to work as an engineer. One day he had a kind of epiphany, he told graduates when he and Ray gave the 1999 commencement address at their alma mater.

He was on his way to work when he had a near-fatal accident with a tractor-trailer. He pulled off the road and decided to do something different with his life.

From Tom’s Car Talk bio (link through and read the entire thing):

Shaking in my little MGA after that experience, I asked myself a simple question. “If I had bought the farm out there on Route 128 today, wouldn’t I be bent at all the LIFE that I had missed?” I drove to work, walked into my boss’s office, and quit. My boss was convinced that I had taken a job with a competitor. He just couldn’t understand the actual truth. Life was the issue.

And then a few other things happened and . . . baddabing, baddaboom . . . Tom and his brother opened a DIY auto shop decades before the current Maker Movement was in full swing. More from Tom’s bio:

. . . then along comes my deadbeat brother. He had been teaching science someplace up in Vermont. And when the Vermonters ran him over the border, he came to Cambridge looking for a job. I made the mistake of telling him about one of the two or three great ideas I’ve had in my life: a do-it-yourself auto repair shop. I had actually thought this up while at the Foxboro Company, contemplating long-term trends. I put together the trend of higher and higher auto repair costs with the fad of everyone (hippies, mostly) “getting into it,” you know? And . . . baddabing, baddaboom . . . out comes DIY Auto Repair. “GREAT,” says my brudder. “Let’s do it.”

“What are you, nuts?” I say to him. “It’s the W word. I don’t go to W anymore. I drink coffee and paint the apartments of beautiful women. Flake off.” But since he was totally unemployable and his wife was with child, he talked me into it. And so was born Hacker’s Haven (that name was another of my truly great ideas. In those pre-PC [I mean personal computer, not politically correct] days, a hacker was someone who didn’t know what the hell he was doing but gave it a try anyway). A haven for hackers. How sweet it is.

And then they were asked to do a panel at NPR’s Boston affiliate, WBUR, and Tom was the only one who showed up and . . . baddabing, baddaboom . . . Tom and Ray started doing Car Talk.

They combined all the unfakables—humor, passion and knowledge—and left in their wake an audience residing far outside the title of the show. They didn’t set out for a crossover audience—yet that’s exactly what they attracted.

While I was sad to hear of Tom’s passing earlier this week, I’m heartened to have been touched by his humor, his passion and his knowledge—even if the latter never sunk into my thick head (perhaps a case for the medical arm of Dewey, Cheetham and Howe).