The Fat Guy in the Red Suit Knows the Deal 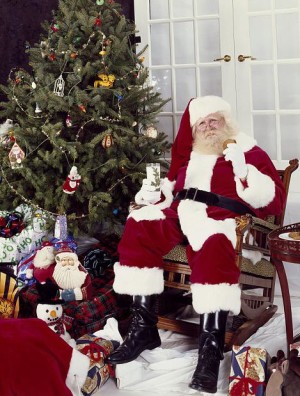 Do you ever feel like a kid at times and wonder how you got here, to this adult place?

Two weeks ago, a friend and I went down that rabbit hole.

A young woman he manages at work is staring down a fork in her road. She doesn’t know what to do next. Wants more money, more responsibility, more of all the usual things…

She looks at him and sees an old guy (anyone over 30 in her eyes). He looks inside and sees a kid. He’s still laughing at the same things he did when he was 12 and his tastes, while they’ve evolved, aren’t too far off 12 either. The same things tend to excite and scare him, too. He’s just better at coping these days. But… When he looks in the mirror… He understands the “old” she sees.

He asked her to stay put for a little while and to learn.

“You’re just as smart as I am,” he explained. “You could probably do my job. The difference between us that matters isn’t that I’m older or smarter. It is that I’ve done my job and your job.”

I have eleven years of Santa pics with my kids. Ten of them are with the same Santa.

When you look at him, he’s an older guy with a great smile and a beautiful, natural silver beard — the kind that doesn’t come off via a tot’s tug.

There are plenty of older men who could fit the bill, but why don’t they?

There’s more to being Santa than putting on the red suit. Just ask Doris Walker.

A good Santa can accept the transfer of a sleeping baby from her mother’s arms, without waking the slumbering bundle. And: He knows which pose to assume, to delight the mother and all the relatives receiving photo copies. He cradles the baby in one arm, like Barry Sanders with a football, then raises the other arm, to put one finger to his mouth in a shushing motion. He makes eye contact with the photographer, smiling with his eyes instead of his mouth. Happy momma. Sleeping baby. Mission accomplished.

A good Santa knows the basics of kids, too. Want a kid to believe you’re the real deal? Tell her something you’d only know if you were in her house. Tell her to stop fighting with her brothers or sisters and suggest she listen to her parents. Not groundbreaking stuff, but to that four-year old jumping off Santa’s knee, he’s a believer. Somehow that fat guy in the red suit knew he fought with his older brother.

What Santa really knew was the truths of childhood.

He knows because he’s had experience. He’s seen what works and what doesn’t, so that by year ten, he knows how to deal with difficult kids and their often equally difficult parents. He knows how to put people at ease, and can spot a potential meltdown ten families into the line waiting to see him.

He’s just like my friend, but wrapped in a different look. He’s failed and the lessons that arrived fueled future successes.

I hope the young woman my friend is mentoring will stick around. She might get more money somewhere else, but the experiences and guidance she’ll gain working with him have greater value.

She doesn’t have to be an elf forever, but if she wants to aim for a red suit of her own, she needs to put in the time.

My friend, and I think Santa, too, would tell her they’re still young at heart, feeling very much the kid. That thing making them adults — and allowing them to succeed — isn’t age. It is experience.

Money pays the bills, but experience will be a better guide than money the next time she finds herself facing a fork in her road.