By Callie Oettinger | 29 Comments | What It Takes 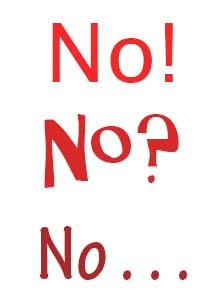 (This post went up almost 4.5 years ago. Bringing it back for a rerun today.)

Thursday I read this from Seth Godin:

Thursday afternoon, Jonathan Fields’ “When No Means Go” arrived in my in box.

Seems a few of us have no on the mind this week.

A few years ago, a dying car sent me into a car dealership for a new set of wheels. While filling out the financial forms, the car salesman asked about my work.

“Oh, I have a manuscript. I’ll bring it in tomorrow when you pick up the car.”

I smiled politely and asked if I had signed all the right boxes.

Guess who drove her husband’s car to the dealership and then sped off after he went inside and picked up the new car. . . .

“Why didn’t you tell him no?” my husband asked.

“I didn’t want to hurt his feelings.”

“Isn’t it worse to lead him on and then not show up?”

I’ve always had a hard time saying no.

2) I don’t like dealing with the response to no.

Jonathan’s piece does a great job of explaining his reasons for saying no, so I won’t go into them here. Read his post and know that bandwidth is in my vocabulary, too.

Earlier this year, I was told no in response to a project on which I’d been working. I’ve been told no before. Who hasn’t? However . . . The way this one arrived was a first.

My response ran like Elisabeth Kubler-Ross’ five stages of grief, except without “bargaining” and repeat visits from “Denial” and “Anger.” I understand the no now, but at the time . . . I couldn’t get my head around the emotions. During the release of The Authentic Swing, when I responded with a few no’s myself, I got it.

With the release of The Authentic Swing, a number of readers assumed Steve was doing interviews. That’s what you do when you release a book, right? You do interviews. . . That’s not what the Black Irish team did, though. (read “Portrait of a Launch”)

Around that time, Glenn Reynolds‘ producer contacted us about Glenn visiting Los Angeles. Would Steve have time to meet up? Glenn has interviewed Steve in the past, but they’ve never met in person. Yes, he replied and Glenn’s producer and I booked the interview.

Earlier in the year, Aubrey Marcus reached out to share his work with Joe Rogan and the possibility of scheduling an interview. Joe’s also located in the Los Angeles area, soo . . . If Steve was breaking for one interview. Would he do two, if we could book them close together? He did, a day apart, enjoying both, and then went back to work.

More requests came in—and I understood why. For the most part, those told no understood, but . . .

I read a post from someone who had been told no. He made a comment on his site, along the lines of (I’m paraphrasing here): “Pressfield’s booking person declined an interview with me a while back and, at the time, I bet that if Oprah called, he wouldn’t say no to her. Well . . Guess who did an interview with Oprah?” Then he went on to say he receives books from other authors every day who are interested in working with him and he’ll support them instead . . . (again, paraphrasing, based on my interpretation and memory . . . )

It was painful to read because I understood where he was coming from.

No feels like a personal rejection. He made the no about him. And then he made Steve’s yes to Oprah about him, too. Those answers weren’t about him. They were about Steve, his time, and his work.

Back to that post from Seth, which started this article, on what no doesn’t mean:

I see the world the way you do, I’ve carefully considered every element of this proposal and understand it as well as you do and I hate it and I hate you.

It’s easier to write this than it is to put it into practice, but . . .

You have to move beyond no. If you don’t, it will devour you from the inside out.

For those saying no: You don’t owe anyone anything, but . . . be nice. Think about how you would want to be told no yourself.

In Steve’s case, he’s aware that people want him to say yes, which is one reason the “Ask Me Anything” audio series was launched. It’s an opportunity for Steve to connect with readers and answer their questions, but on his time. He’s done one hour-long session so far, with more to come. When I respond no on Steve’s behalf, or for other clients, or my own personal projects, I try to make the no’s shared as nicely as possible, thinking about how I’d want to receive them myself. I believe in the boomerang of Karma. What goes around comes around.

For those receiving a no: It hurts, yes, but . . . Back to that list above from Seth. More often than not, no is not about you. George Costanza might have used that old “It’s not you, it’s me” line to get out of things, but . . . In the real world, often no really isn’t about you. Move on with your art. Let it inspire you instead of being an anchor, weighing you down.