Chris Guillebeau travels and writes for a small army of remarkable people at chrisguillebeau.com and twitter.com/chrisguillebeau. When you visit his blog, check out his 279 Days to Overnight Success and his Brief Guide to World Domination. Good stuff! His book, The Art of Non-Conformity, will be available online and in bookstores starting Sept. 7, 2010.

In The Art of Non-Conformity you talk about your one-time job “slinging boxes” at FedEx at 3 AM in the morning. How did you go from there to developing a business and then being a volunteer working with refugees, warlords and presidents in West Africa?

I’ve never been a good employee, so part of my early motivation was very simple: to find a way to support myself without working for someone else. Over the years it became more strategic; I came to see entrepreneurship as a real way to change the world and so on—but in the beginning, I was mostly trying to avoid the dreaded “real job.” I learned how to sell coffee on eBay, then I learned to do web design, then business consulting, affiliate marketing, and so on.

After 9/11, I was depressed like everyone else and pondering the meaning of life. I read about a medical charity in West Africa that needed volunteers. I talked with Jolie, my wife, and we applied for a two-year commitment that eventually turned into four years overseas. The culmination of these experiences—living in post-conflict Africa, working as an entrepreneur, travel, and challenging authority in general—led to the founding of The Art of Non-Conformity network in 2008.

How do you generate ideas? And, once you have an idea, how do you decide whether it is worth pursuing? 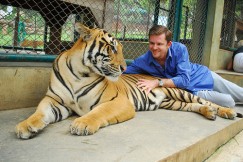 Ideas are rarely the problem. My impression is that most writers, entrepreneurs, and other creative people have no shortage of ideas. What we sometimes lack is a) the ability to take the first steps, and b) the ability to keep executing to finish the project spawned by the idea.

I think I’ve always been an idea generator but not always an idea executor. A big part of execution lies in overcoming fear, and for a long time I suffered from fear of execution—or something like that.

Now, my perspective most of the time is “Why not say yes?” I don’t pursue everything, of course, but I try to do as much as possible. We tend to regret the things we don’t do much more than what we actually do. And besides, I would rather attempt something and fail than attempt so little that success is always guaranteed.

You’ve traveled all over the world, and have met so many different people. Have you been able to identify why some people jump toward new opportunities, while others remain blind to them? And, what makes you take action? What makes you jump?

Good question. I think that internal obstacles—fear, insecurity, and so on—are more inhibiting than external ones. So the people who jump have somehow been able to overcome the internal obstacles, at least enough to take the jump and see where it leads. It isn’t about being fearless (I’m not sure that anyone is truly fearless) but rather about engaging with your fear and refusing to allow fear to make the decisions.

I jump when something sounds exciting and different. I want to live a life of grateful adventure. If something sounds like an adventure, especially if it involves some kind of challenge, I’m usually up for it.

You’ve written about living a “life of gratitude.” What led you to this? Why is it important? How do you incorporate this into your work?

The most obvious source would be the four years I spent in West Africa, especially Liberia and Sierra Leone. It was as transformative an experience as you might expect. If I wasn’t previously aware of how privileged my upbringing was as a middle-class American, I was certainly aware after that. Those of us who have the liberty to spend our time thinking about travel, writing, and all things unconventional are really in the minority. So it’s not like we should deny ourselves these things or take on a vow of austerity—but I do think the value of gratitude should be front-and-center in our work. To me, gratitude means being aware of this reality, and also trying to do something suitably unique and audacious that makes the world a better place.

In 279 Days to Overnight Success (page 55), you included a quote from the artist Soniei:

“I wake up every day and I work on whatever it is I feel like working on that day,” she told me. “I love working at home, drinking tea and watching my auctions. I just love it. Passion comes first.”

How do you ensure that happiness and passion remain touchstones in your life?

Part of the trick lies in constructing a life where we do what we are motivated to do instead of trying to motivate ourselves into doing something we think we should do. The difference is critical. There is certainly a case for “sucking it up and getting it done” at times, but I think we’ll have a better life overall if we work to minimize those times.  Again, many people around the world don’t have the ability to make these kinds of choices, but because we do, we should treat it with the respect it deserves.

How do you overcome Resistance (meaning self-sabotage, procrastination, self-doubt, etc.)? Do you have a specific technique or metaphor that you employ to fortify, encourage or inspire yourself? Is there an example of Resistance that you can share—how it presented itself and how you overcame it?

Resistance, that beast! Well, to start with I re-read The War of Art, which has been as helpful to me as it has to so many other creatives all over the world. It’s on my desk as I write this right now.

I also have a “1,000 words” personal standard, which basically says that my job as a writer is to crank out 1,000 words a day no matter what else is going on. The standard is kind of like exercise—I can miss a day and still feel fine, but if I miss several days, I get irritable and discouraged. It’s important to note that not all 1,000 words are good; like most writers I edit and discard much more than I use. But the discipline of putting words on paper or a computer screen, just like The War of Art tells us so well, is important on its own.

Here’s another quote from 279 Days to Overnight Success: 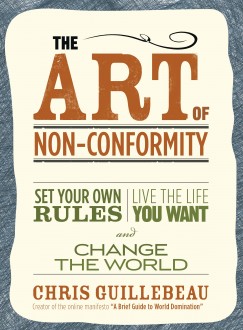 “You can be writing about how to plant flowers for world peace, and once your site becomes popular, the vampires will find you.”

This one made me laugh:

“Remember, no statues are erected to critics. There may be a statue erected to a vampire somewhere, but after visiting 107 countries, I haven’t seen one yet.”

How do you avoid Resistance Vampires—people who love to criticize, tell you what you are doing is wrong, and try to shut you down (usually under anonymous/fake names)?

First, a quick side note: As soon as I wrote the line about a vampire statue, I knew that someone would write in to tell me about various vampire statues around the world—and indeed, several people did.

Now to the point at hand. I’m certainly not immune to Resistance Vampires. I can hear 99 nice things and one negative thing on a particular day, and for the rest of the afternoon I’ll be thinking about the negative thing. I’d love to change that, but haven’t figured out how to do so yet. I don’t think the answer is to shut ourselves off from the world completely as some people do. For me, one of the most gratifying things about my whole project is the direct interaction with readers. It helps to keep a few things in mind: the vast majority of people are far more supportive than critical, some other people become vampires simply because they are envious or otherwise threatened by success, and it’s much easier to be a cynic of any kind than a believer of any kind. Since I’m not in the business of writing for cynics, I try to tune them out as much as possible.

I asked Barbara Winter , another travel-bug-bitten writer, if there’s a question she’d like to ask. Barbara has already read your new book, The Art of Non-Conformity, and delivered a great question:

Does being a traveler teach us anything that is useful to being self-employed?

I love Barbara Winter. Her book Making a Living Without a Job is fantastic.

I think that traveling and self-employment do go hand-in-hand, especially if your travel is independent or otherwise unconventional. For example, I experience loneliness a number of places around the world, particularly when I’m by myself somewhere and don’t speak the language. The same kind of feeling can sometimes come up when you’re self-employed. In both cases, loneliness isn’t always a bad thing. You can channel it for creativity. You can look forward to times when you won’t be lonely or uncertain. Or, of course, you can just appreciate what you have as part of the grateful adventure.

The Art of Non-Conformity pubs Sept. 7th. You have a non-conforming book tour, too. Please share a little more about what you are doing, why, and where readers can catch up with you in person.

Yep, my first print book! I’m excited. And I wanted to do something big and fun to celebrate, so I put together what I call an Unconventional Book Tour. I’ll be visiting all 50 states and 10 Canadian provinces. The tour is self-funded and collectively-organized by my readers, with the goal of meeting everyone who reads AONC in North America. We’ll see how that goes. 🙂

I know that publishers (and some authors) have largely turned their back on book tours, but my sense is that they’ve been doing it wrong. I understand that it might be more efficient to only visit major markets or do some kind of online event. But I also don’t think that’s very interesting, and as mentioned above, I’m attracted to doing things that are adventurous or different. So ready or not, I’m heading out to see all of the U.S. and Canada this fall.