Writing Characters Who Are Smarter Than We Are

There’s a great moment in the movie Tootsie, when Dustin Hoffman—in costume as “Dorothy Michaels” but speaking as himself, “Michael Dorsey”—says, out of respect for Dorothy, “I wish I was prettier.” In other words, the character he was portraying was better than he was. That’s an amazing thing if you think about it. 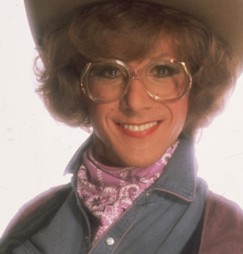 Dustin Hoffman as "Tootsie": He wanted to be prettier

Working above our game

As writers, can we write characters who are beyond us emotionally and intellectually? Can we work above and past our own personal limits?  I’ve heard the opposite. I don’t believe it. How does Thomas Harris (who I’m sure is a very nice guy) conjure Hannibal Lecter? How did Arthur Golden pull off so brilliantly Memoirs of a Geisha? How did Dickens get inside the skin of any of his characters—or Shakespeare or Tolstoy or Sophocles?

The answer is that we as writers (and painters and filmmakers and every other kind of artist) work from a part of our beings that is far deeper and wiser than our mundane everyday selves.

There’s no great mystery to this. As kids we could pretend anything, couldn’t we? Be Flash Gordon, be Catwoman; we could walk like an Egyptian or mock our assistant principal’s accent; we could mimic flawlessly the way Sister Mary Catherine screwed up her nose when she whacked us over the knuckles with her yardstick.

Being brave in our work

When we are told to be brave in our work, what that means is “trust the source.” When I was working on The Legend of Bagger Vance, it became clear to me very early that my narrator—in whose voice I was speaking—was a much deeper character than I am. Was I daunted? Hell, yes. But it also became clear very fast that this character (a Southern physician in his seventies) was speaking in a true and authentic voice. How does this happen? I don’t know. It just does.

In Patricia Madsen’s wonderful book, Improv Wisdom, she tells of an exercise she used for years in her Improv classes at Stanford. Imagine a box. Now open it. What’s inside? Sometimes it’s a frog, sometimes a diamond. But the trick is: there’s always something in the box.

The ego and the Self

When we’re walking down the street as our everyday selves, our identity is seated in our ego. The ego is that fearful, hesitant, pain-in-the-ass persona who generates Resistance and in general holds us back and ties us down. But when we write or paint or compose and trust the source, our identity shifts over into the Self.

The Self beats the hell out of the ego any day. The Self, Jung tells us, abuts the Divine Ground. The Self is the Muse, the quantum soup, the unconscious, the soul. The Self knows the dark side and it understands the light. It can make fun of Sister Mary Catherine and it can channel Vishnu.

My first real adult job was as a junior copywriter at Benton & Bowles in New York. My boss was a terrific writer and novelist named Ed Hannibal. When I’d bring him ideas, he would grimace. “This idea is so small. It’s the size of a postage stamp! If this idea was any tinier, I’d need a microscope to see it. Go back to your cubicle and bring me something BIG.”

It ain’t easy being big

I was terrified. I didn’t want to be “wrong.” I didn’t want to reach for something and fall on my face. But it was so excruciating to see the scowl of disappointment on Ed’s face that I had to try. Advertising sucks; I won’t try to defend it. But an apprenticeship in a creative trade, be it journalism or software design or writing instruction manuals for submersible industrial water pumps (another gig on yours truly’s C.V.), can teach you stuff you don’t learn in the Iowa Writers’ Workshop.

Turn off the self-censor. Release all self-judgment. Type as fast as your fingers will let you and don’t even look at what you’ve done until ten days later. Do that—and keep doing that.

The well is deep. Trust it. Trust the source.