Selling Books in the Trenches

By Steven Pressfield | 9 Comments | What It Takes

So far, we’ve been talking in these What It Takes posts from our own point of view, from the angle of the writer and his agent and publicist. Today I’d like to turn that around. 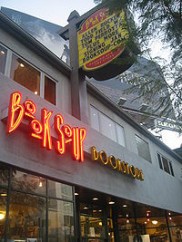 Let’s get down and dirty–in the trenches, selling books to bookstores. We’ll talk with Random House’s David Glenn, who’s one of the key sales reps working to “sell in” The Profession—and one I’ve had contact with since Gates of Fire back in 1998.

SP: David, welcome and thanks for giving our readers, many of whom are writers and artists, a peek into the real world of “moving the product.” Let’s plunge right in. We hear a lot these days about New Media and cutting-edge book-marketing tools. Tell me why that’s all baloney and why it’s really all about sales reps.

DG: Relationships still count. Reputation still counts. Social networking may well help a book go “viral,” but buyers for bookstores are like the rest of us: they’re looking for ways to spend LESS time hunched over their computers, not more. At heart, they’re book people, not computer people.

SP: What’s it like for the buyers you’re selling to? Are they as crazy-busy as the rest of us?

DG: Let me start by saying that I sell to the independent retail field sales channel. In other words, I have no contact or responsibility for what the chains or clubs buy. That being said, publishers reps typically work three seasons a year, each covering four months. A season can mean as many as 400 titles. That’s a lot of books for a buyer to have to familiarize herself with! So yes, anything my publishers can do in new media or online to increase the visibility of a given title can only help the buyer and help me. But in the real world, buyers depend on reps to help them filter this flood down to the essentials. In my own case, I’ve worked with some buyers for more than twenty years. They trust me.

SP: Can a rep have an impact on which books get highlighted and which don’t?

DG: Where reps can make a huge difference is with a “mid-list” title–as opposed to the prototypical “blockbuster.” The blockbuster is going to sell a truckload, whether it gets any help or not. But a book from a new writer, or the third or fourth book from a good but lesser known author, needs help. The rep can really make a difference here. A good rep can play a huge role in determining which mid-list titles any given store will highlight.

SP: So if I’m a mid-list writer, I want to send you a bottle of Scotch.

DG: I’ll take it. But the bottom line about New Media and digital marketing tools is they’re primarily deployed for the customer, whereas the sales rep is the portal for the bookstore buyer. The rep funnels their buying choices toward the titles the rep feels stand the best chance of appealing to that store’s typical customer.

SP: How important is content and quality? Do buyers really read the new books coming in?

DG: They do. At least in my area–independent bookstores. Buyers are book people. One of the longest-serving tools in the roll-out to bookstores (or what we call “the sell in”) is the “bound galley” or “advance reading copy,” also known as an ARC. These are bound manuscripts, done up in the form of a paperback book. We use them to get early reads.

Sales reps will request a supply of these from the publisher, with the intention of hand-delivering them to key buyers and bookstore staffers. If a rep has built up a reputation over the years, he can put an ARC into a particular staffer’s hands and expect that person to dutifully read the book. Your hope is they’ll love it and, when the finished book actually arrives in the store, they’ll be motivated to hand-sell it. So, yes, buyers really DO read upcoming books.

DG: Of course there’s no way a buyer can read more than a fraction of the total number of new books published in the U.S. each year. I’ve heard one estimate put it at 180,000! For independent retailers in particular, this “title knowledge” is viewed as a key business edge in an environment where there are an ever-increasing number of places to buy books. As to the importance of content and quality at this point, well, it’s a given that an ARC is, by its very nature, “unfinished,” at least in terms of final editing and proofreading. But as long as the general story arc is there, and the buyer or staffer is able to get enough of a taste of what the book is all about, that is sufficient for sell-in.

SP: We hear a lot these days about “branding.” Are brand-name authors like John Grisham or James Patterson “automatics” as far as selling their titles goes? Should a first-time author try to “brand” herself or get caught up in self-marketing or self-positioning at all?

DG: Most brand-name, highly-commercial authors move a majority of their copies through the national chain stores, mass merchandisers (Target, for example), and warehouse clubs (Sam’s Club, Walmart, Costco). And because discounting is a key feature for these outlets, many independent bookstores seem to have decided to, in effect, cede this segment of the market to their competition. Instead, the indies are focusing on finding unique sales niches for their stores and capitalizing on their special abilities to identify (with a sales rep’s help) new and upcoming writers.

The result is that these “branded” authors are less “automatic” for certain channels of sales, and more automatic for others.

As for first-timers, well, from a purely economic standpoint, the perfect world is first for him or her to become the “darling” of the independent community, and then to get sort of “sub-discovered,” if you will, by the other distribution channels. That would offer a writer the greatest shot at selling the highest number of copies over time. Frankly, I’d say more often than not it’s the market itself, rather than the writer, that does the branding. And it rarely happens for first-timers. It’s pretty hard to be a “brand” without first developing a body of work.

SP: What’s the most fun part of the job for you, David?

DG: The most important–and the most gratifying–part of my job is helping new authors get discovered and established to the point where each new book they write is an event to be anticipated.

SP: Imagine you’re speaking to a roomful of eager, ambitious, talented young writers. What single piece of advice would you give them about their careers? What should they understand about the business side of books that they are probably clueless about?

DG: Hmmmm. A single piece of advice . . . Okay, here goes: know your audience. Most people learn to write in grade school, but if you actually plan to make a living at it, you must of course be able to sell it. And that requires not merely talent. The world is full of people who can write but will never make a dime doing it. Hell, I’m one of ’em.

You may feel you have a wonderful story to tell, but so does my doddering neighbor next door. Talent and desire aren’t enough to make the registers ring at retail. For that, you need to have identified your audience and have written your book in such a way as to give them the reason, or “hook,” to buy it. Is it humor? Is it great dialogue? Does it have a riptide pace or plot? Ultimately, who’s the target, and why?

And for our bonus round: read. A lot. All the time. I think it’s highly unlikely anyone will be a successful writer without first being a voracious reader. Dissect what it is about your favorite writers that so draws you to their work. We’re a breathtakingly fortunate bunch, we book folks. What is merely most people’s avocation is actually our vocation.

SP: David, thank you so much for sharing all this with us, particularly that last piece of wisdom about knowing your audience–and reading. And thanks, personally, for all you’ve done for me and my books over the years. That Scotch is on the way!