The Joys of Misery

Chapter 17   The Joys of Misery

Among all elite U.S. forces, the Marine Corps is unique in that its standards for strength, athleticism and physical hardiness are not exceptional. What separates Marines, instead, is their capacity to endure adversity. 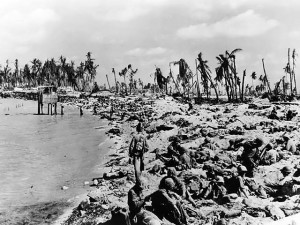 U.S. Marines on the island of Tarawa, November 1943

Marines take a perverse pride in having colder chow, crappier equipment and higher casualty rates than any other service. This notion goes back to Belleau Wood and earlier, but it came into its own during the exceptionally bloody and punishing battles at Tarawa and Iwo Jima, the Chosin Reservoir and Khe Sanh. Marines take pride in enduring hell. Nothing infuriates Marines more than to learn that some particularly nasty and dangerous assignment has been given to the Army instead of to them. It offends their sense of honor.

This is another key element of the Warrior Ethos: the willing and eager embracing of adversity.

In 1912, the Antarctic explorer Ernest Shackleton was seeking volunteers for an expedition to the South Pole. He placed the following ad in the London Times:

The next morning, 5000 men lined up to volunteer.

The payoff of a life of adversity is freedom. There’s a story of the tribes in ancient Afghanistan. When Alexander was preparing to invade the Wild Lands of the Scythians in 333 B.C., a tribal delegation came to him and warned him, for his own good, to stay away. In the end—the Scyths told Alexander—you and your army will come to grief, as all other invaders have in the past (including our friend Cyrus the Great, who was killed north of Mazar-i-Sharif and whose body was never recovered).

“You may defeat us,” said the tribal elders, “but you will never defeat our poverty.”

What the Scythians meant was that they could endure greater adversity even than Alexander and his Macedonians.

When the Spartans and their allies overcame the Persians at Plataea in 479 B.C., the spoils included the great pavilion tents of King Xerxes, along with the king’s cooks, wine stewards, and kitchen servants. For a joke, the Spartan king Pausanias ordered the Persian chefs to prepare a typical dinner, the kind they would make for the Persian king. Meanwhile, he had his own cooks whip up a standard Spartan meal.

The Persian chefs produced a lavish banquet composed of multiple courses, served on golden plates, and topped off by the most sumptuous cakes and delicacies. The Spartans’ grub was barley bread and pig’s-blood stew. When the Spartans saw the two meals side by side, they burst out laughing. “How far the Persians have traveled,” declared Pausanias, “to rob us of our poverty!”

If shame is the negative, honor is the positive. Nang in Pashto is honor; nangwali is the code of honor by which the Pashtun tribal warrior lives. Bushido is the samurai code. Every tattoo parlor adjacent to a U.S. Marine base has this in innumerable design variations:

In warrior cultures—from the Sioux and the Comanche to the Zulu and the mountain Pashtun—honor is a man’s most prized possession. Without it, life is not worth living.

In 413 B.C., the Spartans sent a general named Gylippus to help their Sicilian allies in the city of Syracuse, which was under siege by the Athenians. Gylippus’s first job was to pick from the civilian population those men who would make the best military officers. Gylippus instructed his lieutenants to seek neither men who craved wealth nor those who sought power, but to select only those who desired honor.

Honor, under tribal codes, is a collective imperative. If a man receives an insult to his honor, the offense is felt by all the males in his family. All are mutually bound to avenge the affront.

The American brand of honor is inculcated on the football field, in the locker room and in the street. Back down to no one, avenge every insult, never show fear, never display weakness. Play hurt, never quit.

At Thermopylae in 480 B.C., the Persian king Xerxes, at the head of an army of two million men, demanded of the Spartan king Leonidas that he and his 4000 defenders lay down their arms. Leonidas responded in two words: “Molon labe.”

“Come and take them.”

If you travel to Thermopylae today, you’ll see the Leonidas monument. It has only two words on it.

The American brigadier general Anthony McAuliffe went Leonidas one better. Surrounded by the Germans at Bastogne in World War II, the commander of the 101st Airborne replied to the enemy’s demand to surrender with one word:

Warrior cultures employ honor, along with shame, to produce courage and resolve in the hearts of their young men.

Honor is the psychological salary of any elite unit. Pride is the possession of honor.

Honor is connected to many things, but one thing it’s not connected to is happiness. In honor cultures, happiness as we think of it—“life, liberty and the pursuit of happiness”—is not a recognized good. Happiness in honor cultures is the possession of unsullied honor. Everything else is secondary.

In the West, pride and honor are anachronistic these days. The practitioners of honor are often ridiculed in popular culture, like Jack Nicholson’s Marine colonel in A Few Good Men: “You can’t handle the truth!” Or Robert Duvall in Apocalypse Now: “I love the smell of napalm in the morning.”