The Will to Victory

Chapter 19.  The Will to Victory

When Alexander was a boy, a party of traders came to Pella, the Macedonian capital, selling trained warhorses. Philip the king and all his officers went down to the plain to put these mounts through their paces. 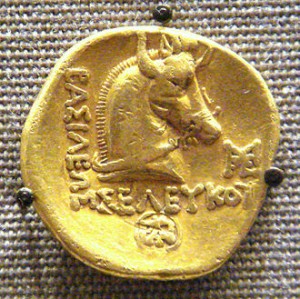 Head of Bucephalus from the Seleucid era

One horse, called Bucephalus, was by far the fastest, strongest and bravest—but he was so wild that no one could ride him. Alexander watched as his father let the steed go without making an offer. “What a fine mount you lose, Father,” he said, “for want of spirit to ride him.” At this, the king and all his officers laughed. “And what will you pay for this horse, my son—if you can ride him?” “All of my prince’s inheritance.” So they let the boy try.

Now, Alexander had noticed something about the horse that no one else had—that the beast was spooked by its own shadow. So he took Bucephalus’s bridle and turned him to face into the sun. Then, little by little, speaking gently to him and stroking his neck, he succeeded in quieting the steed down; next, with a quick leap, he sprung onto the horse’s back. Philip and the officers watched in breathless trepidation as the prince took this fiery mount out onto the track and spurred him to the gallop. Would the horse throw Alexander, trample him or break his neck? Alexander coolly brought the animal under control and raced him full tilt around the circuit. When he returned to the grandstand, the officers cheered him wildly, while Philip came forward with tears in his eyes and took his son into his arms. “Look you out for a kingdom far greater than ours, my son. For Macedonia is plainly too small for you!” 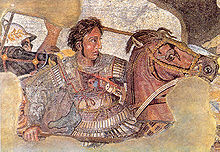 Alexander aboard Bucephalus at the battle of Issus

Patton said, “Americans play to win at all times. I wouldn’t give a hoot in hell for a man who lost and laughed. That’s why Americans have never lost a war and never will lose one.”

The will to fight, the passion to be great, is an indispensable element of the Warrior Ethos. It is also a primary quality of leadership, because it inspires men and fires their hearts with ambition and the passion to go beyond their own limits.

Epaminondas, the great Theban general, was the first to beat the Spartans—at the battle of Leuctra in 371 B.C.

The evening before the fight, Epaminondas called his warriors together and declared that he could guarantee victory on the morrow if his men would vow to perform one feat at the moment he commanded it. The men, of course, responded aye. “What do you wish us to do?” “When I sound the trumpet,” said Epaminondas, “I want you to give me one more foot. Do you understand? Push the enemy back just one foot.” The men swore they would do this.

Battle came. The armies clashed and locked up, shield against shield, each side straining to overcome the other. Epaminondas watched and waited till he judged both armies had reached the extremity of exhaustion. Then he ordered the trumpet sounded. The warriors of Thebes, remembering their promise, summoned their final reserves of strength and pushed the foe back only one foot. This was enough. The Spartan line broke. A rout ensued.

The will to victory may be demonstrated in places other than actual battle.

A Roman general was leading his legions toward the enemy in a swampy country. He knew that the next day’s battle would be fought on a certain plain because it was the only dry, flat place for miles. He pushed his army all night, marching them through a frightening and formidable swamp, so that they reached the battle site before the foe and could claim the high ground. In the aftermath of victory, the general called his troops together and asked them, “Brothers, when did we win the battle?” One captain replied, “Sir, when the infantry attacked.” Another said, “Sir, we won when the cavalry broke through.” “No,” said the general. “We won the battle the night before—when our men marched through that swamp and took the high ground.”