But what about us? What about the soldier or Marine who steps off the plane from overseas and finds himself in the scariest place he’s seen in years: 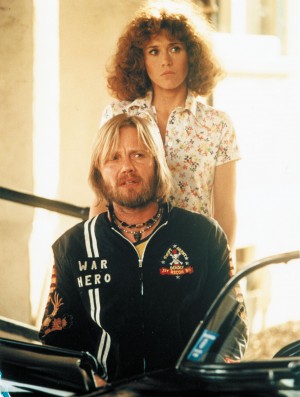 Jon Voight and Jane Fonda in the Vietnam-era "Coming Home"

Has everything he knows suddenly become useless? What skill set can he employ in the civilian world? The returning warrior faces a dilemma not unlike that of the convict released from prison. Has he been away so long that he can never come back? Is the world he knows so alien to the “real world” that he can never fit in again?

The answer may not be as far away as he supposes.

The returning warrior may not realize it, but he has acquired an MBA in enduring adversity and a Ph.D. in resourcefulness, tenacity and the capacity for hard work.

He may find that the warrior skills he has acquired are exactly what he and his family need. And more: that these skills possess the capacity to lift him and sustain him through the next stage of his life and through every succeeding stage. The war remains the same. Only the field has changed.

The returning warrior possesses the Warrior Ethos, and this is a mighty ally in all spheres of endeavor.

The civilian sometimes misconstrues the warrior code; he takes it to be one of simple brutality. Overpower the enemy, show no mercy, win at all costs.

But the Warrior Ethos commands that brute aggression be tempered by self-restraint and guided by moral principle.

Soldiers of the Israeli Defense Forces (who often must fight against enemies who target civilians, who strike from or stockpile weapons within houses of worship and who employ their own women and children as human shields) are taught to act according to a principle called Tohar HaNeshek: “purity of the weapon.” This derives from two verses in the Old Testament. What it means is that the individual soldier must reckon, himself, what is the moral use of his weapon and what is the immoral use.

When an action is unjust, the warrior must not take it.

Alexander, in his campaigns, always looked beyond the immediate clash to the prospect of making today’s foe into tomorrow’s ally. After conquering an enemy in the field, his first act was to honor the courage and sacrifice of his antagonists—and to offer the vanquished warriors a place of honor within his own corps. By the time Alexander reached India, his army had more fighters from the ranks of his former enemies than from those of his own Greeks and Macedonians.

Cyrus of Persia believed that the spoils of his victories were meant for one purpose—so that he could surpass his enemies in generosity.

I contend against my foes in this arena only: the capacity to be of greater service to them than they are to me.

Alexander operated by the same principle.

Let us conduct ourselves so that all men wish to be our friends and all fear to be our enemies.

The capacity for empathy and self-restraint will serve us powerfully, not only in our external wars but in the conflicts within our own hearts.