“We Are Going to War”

The following is from “Israel Journal: June, 1967,” a brilliant first-person account of the Sinai battles of the Six Day War by Yael Dayan, the daughter to Moshe Dayan and an accomplished journalist and novelist in her own right (as well as, later in her career, a member of the Israeli Knesset and Deputy Mayor of Tel-Aviv.) 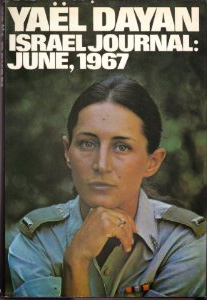 Ms. Dayan was twenty-eight at the time of this writing and a lieutenant in the Israel Defense Forces. She accompanied division commander Ariel Sharon (later PM of Israel) as he led his armored forces against the Egyptian army in Sinai.

This passage begins on the eve of war, on the Israel-Egypt frontier, where armored forces of both sides had massed, awaiting the fatal moment.

I slept in the tent for a couple of hours and with sunset I knew. Nobody said to me, “We are going to war.” Helicopters landed occasionally and the war room was busy … Dov said to me, “You had better get some equipment.” [From the supply truck] I took for myself a rucksack and a map case and pad … A friend gave me two pairs of woolen socks. I gave my identity cards to David and received instead a “prisoner’s card.” These were the details I was allowed to give if I was captured: Number376963, rank—lieutenant, blood type, vaccinations, name, and family name—an uneasy one in my case …. Dov was writing to his brother … He was not nervous, just a little excited. “You’ll see,” he said, “war strips you of all the superfluous. What remain are the little immediate comforts—water in the canteen, toilet paper, cigarettes. Are you worried?” “No.  I don’t think anybody in the world, excluding my brother, cares much whether I exist or not.”

At 1 A.M. I saw Arik [Gen. Ariel Sharon] shaving in the trailer, wash his face, examine himself in the mirror, enjoy the after-shave lotion. He asked me if everything was ready. “We are going to win a war,” he said. He knew, he radiated confidence, he was happy … Over tea [Dov] told me our big battle would be Abu-Ageila … Arik, Dov and others had been with the paratroopers in the Sinai in 1956 and they projected a feeling of here-we-go-again. “A strange way to go to war,” someone said, “daylight, mid-morning, just like this.” It wasn’t just like this, I thought. It was the only thing left to do. Both sides could make the first move in, the enemy moved, the straits [of Tiran] were blocked, all the gates closed, and the people—an army. It was not at all “just like this,” it was nineteen years of trying to believe that the Middle East would accept our presence, nineteen years [since the founding of the state of Israel] of building what we were about to defend—it was all those moments of holding back, of being threatened, or being condemned and being left alone. At eight-ten, in a strong, confident voice, Arik gave the order to [his commanders] Natke, Motke, and Arie: “Nua-Nua Sop,” which means “Move over,” the two words we were ready for. At eight-fifteen we could see our tanks descending from the hills south of us toward the frontier and at eight-thirty Arik was watching with his binoculars and saying, “Here! We’re shooting!”

The static period was over and the movement began. “Static” doesn’t mean lifeless, for it had been a period of building and reinforcing, a phase both uncomfortable and inevitable. At eight-fifteen on June 5, we gambled all we had. What for other countries would have been defeat, for us would mean extermination. There was no way to lose the war and survive, and each man carried this knowledge along when we moved west—some with a sense of history and cerebral analysis, others with the primitive and powerful drive for self-preservation. The radio started broadcasting military marches, and the first announcement was made to the public—“From the early hours of the day fierce battles are taking place between the Israeli air force and armor and the Egyptian army which moved toward us.” I felt stripped of everything now. Nothing much existed away from the immediate. We were moving, war was on, I was surrounded by men who were bound to win. The long wait was over.