“With The Old Breed”

E.B. Sledge was a Marine mortarman on Peleliu and Okinawa in WWII. His first-person memoir, With The Old Breed (that he reconstructed from notes scribbled in a New Testament he carried with him throughout the fighting), stands with the very best combat narratives not just from World War II, but from any war in history. 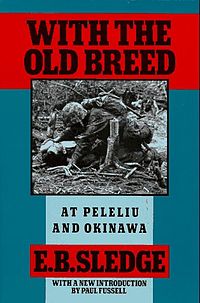 Ken Burns (who drew extensively from Sledge’s text for his celebrated PBS documentary, The War) wrote, ” … in all the literature of the Second World War, there is not a more honest, realistic or moving memoir. This is the real deal, the real war; unvarnished, brutal, without a shred of sentimentality or false patriotism, a profound primer on what it actually was like to be in that war.”

Here, selected almost at random (since the book is so packed with gripping material), are several representative passages, not for the squeamish, from the pen of this enlisted infantryman of the 3rd Battalion, 5th Marines, 1st Marine Division:

The amtrac rattling toward us by this time was certainly a most welcome sight. As it pulled into position, several more Japanese raced from the pillbox in a tight group. Some held their bayoneted rifles in both hands, but some of them carried their rifles in one hand and held up their pants with the other. I had overcome my initial surprise and joined the others and the amtrac machine fun in firing away at them. They tumbled over the hot coral in a forlorn tangle of bare legs, falling rifles and rolling helmets. We felt no pity for them but exulted over their fate. We had been shot at and shelled too much and had lost too many friends to have compassion for the enemy when we had him cornered …

The amtrac’s 75mm cannon proceeds to blow apart the pillbox from which the Japanese soldiers had sprinted.

Someone remarked that even if the fragments hadn’t killed those inside, the concussion surely had. But even before the dust had settled, I saw a Japanese soldier appear at the blasted opening. He was grim determination personified as he drew back his arm to throw a grenade at us.

My carbine was already up. When he appeared, I lined up my sights on his chest and began squeezing off shots. As the first bullet hit him, his face contorted in agony. His knees buckled. The grenade slipped from his grasp. All the men near me, including the amtrac machine gunner, had seen him and began firing. The soldier collapsed in the fusillade, and the grenade went off at his feet.

Even in the midst of these fast-moving events, I looked down at my carbine with sober reflection. I had just killed a man at close range. That I had seen clearly the pain on his face when my bullets hit him came as a jolt. It suddenly made the war a very personal affair. The expression on that man’s face filled me with shame and then disgust for the war and all the misery it was causing.

My combat experience thus far made me realize that such sentiments for an enemy soldier were the maudlin meditations of a fool. Look at me, a member of the 5th Marine Regiment—one of the oldest, finest, and toughest regiments in the Marine Corps—feeling ashamed because I had shot a damned foe before he could throw a grenade at me! I felt like a fool and was thankful my buddies couldn’t read my thoughts.

Later, Sledge and other Marines flopped down, exhausted, after knocking out an enemy machine gun nest.

As we talked, I noticed a fellow mortarman sitting next to me. He held a handful of coral pebbles in his left hand. With his right hand he idly tossed them into the open skull of the Japanese machine gunner. Each time his pitch was true I heard a little splash of rainwater in the ghastly receptacle. My buddy tossed the coral chunks as casually as a boy casting pebbles into a puddle on a muddy road back home; there was nothing malicious in his action. The war had so brutalized us that it was beyond belief.

I noticed gold teeth glistening beneath the lips of several of the dead Japanese lying around us. Harvesting gold teeth was one facet of stripping enemy dead that I hadn’t practiced so far. But stopping beside a corpse with a particularly tempting number of shining crowns, I took out my kabar [knife] and bent over to make the extractions.

A hand grasped me by the shoulder, and I straightened up to see who it was. “What are you gonna do, Sledgehammer?” asked Doc Caswell [the Navy Corpsman attached to Sledge’s platoon]. His expression was a mix of sadness and reproach as he looked intently at me.

“You don’t want to do that sort of thing. What would your folks think if they knew?”

“Well, my dad’s a doctor, and bet he’d think it was kinda interesting,” I replied, bending down to resume my task.

“No! The germs, Sledgehammer! You might get germs from them.”

I stopped and looking inquiringly at Doc and said, “Germs? Gosh, I never thought of that.”

“Yeah, you gotta be careful about germs around these dead Nips, you know,” he said vehemently.

“Well, then, I guess I’d better just cut off the insignia on his collar and leave his nasty teeth alone. You think that’s safe, Doc?”

“I guess so,” he replied with an approving nod.

Reflecting on the episode after the war, I realized that Doc Caswell didn’t really have germs in mind. He was a good friend and a fine, genuine person whose sensitivity hadn’t been crushed out by the war. He was merely trying to help me retain some of mine and not become completely callous and harsh.”

After the war, E.B. Sledge returned to his native Alabama, where taught in the Biology Department of Alabama College (later University of Montevallo) until his retirement. With The Old Breed was written originally for the eyes of his family alone, but his wife persuaded Sledge to seek publication. Eugene Bondurant Sledge died on March 3, 2001.