Once we turn pro (and even before we do), our Muse has plans for us. Those plans are our career-in-potential. They exist, whether we choose to believe in them or not. And they’re operating upon us, influencing us like the gravitational pull of an enormous invisible star. 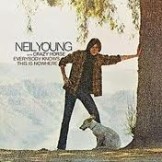 "Everybody Knows This Is Nowhere." Neil Young has put out a lot of albums since then.

It helps, I believe, to think in these terms.

Seventeen years ago, I wrote a book called The Legend of Bagger Vance. I thought it was a one-shot. Today I’ve got twelve books with my name on the spine, and more coming. I wish I had known that at the start. It might have saved me some dark hours.

Which each album, book, film, business enterprise we learn more about who we are. Almost every book I’ve written has arrived out of nowhere. I didn’t see it coming. I had no idea why the subject grabbed me. I started each one knowing nothing about the subject and finished as an uncertified Ph.D.

Then that book went away and another one appeared.

Our Muse has plans for us.

The most difficult part of this journey is, in my opinion, to believe it. To believe in it.

What makes this difficult is Resistance.

Resistance tells us that we have no right to a career in a field we love. One lucky shot maybe. We might be worthy of being a one-hit wonder. But a full career?

A career progresses by stair steps. Each achievement elevates us to a new plateau, upon which newer, more difficult challenges present themselves. Resistance follows. It becomes stronger too.

As our Muse calls us forward in our career, teeing up the next album or film or business venture, Resistance stalks alongside like a shadow—the anti-matter version of the bright star of our career-in-potential.

Here are the forms it has taken in my life:

Anger (at myself and others).

If you’re experiencing any of the symptoms above, ask yourself these two questions: “Do I have a work-in-potential ‘out there’?”  “Am I doing all I can to bring it into material form?”

In Joseph Campbell’s schematic of the Hero’s Journey, there’s a stage named “the Call.” The Call is the invitation to the journey. It’s the next phase of the fulfillment of our career-in-potential.

In Joseph Campbell’s study of myths, he found a second, darker theme that mirrored “the Call.” He named it “the Refusal of the Call.”

It’s just as possible to freeze as it is to go forward, just as common (maybe more so) to yield to Resistance and play small as it is to rise to the occasion and sally forth.

In my experience, there is always a Call. Sometimes it’s hard to hear. Often it’s obscured or occluded or shrouded in haze and miasma. But it’s there. It’s Neil Young’s next album, it’s my next book, it’s your next movie.

The cure for depression/anxiety/panic/malaise etc. is to, first, believe you have a career-in-potential (I guarantee that you do) and, then, act upon it.